A vacation in Thailand and the Philippines unexpectedly threw Minil Patel. The 27-year-old vegan doctor from London, U.K., had always had fluctuating weight, but his jaunt through tropical paradise combined a lack of vegan food with lots of activity, leading to weight loss. Not a problem in and of itself, of course, but when he returned home he overcompensated—junk food like vegan burgers and pizzas along with curries and rice. He wasn’t moving as much, either; in a couple of months, he gained seven pounds.

It may not sound like a lot, but it put Patel at 141 pounds, close to the heaviest he’d ever been. He was snacking on high-calorie protein bars, telling himself he had to bulk up again after his holiday, even as he stacked the extra calories on top of his diet. But he felt sluggish and slow, winded after climbing three flights of stairs. And when he looked in the mirror, he was dismayed by what he saw. “I just felt kind of rubbish about my body,” he says, “like my abs had faded and I didn’t really look like I went to the gym.”

“My love handles had love handles,” he says. “My abs were all but gone unless I really flexed them hard in good lighting.” He resolved to get back those abs, turning to RNT Fitness, an online personal training and body transformation company. He knew it wouldn’t be easy with his erratic schedule and vegan lifestyle, but he welcomed the challenge.

“Belief was the first part,” he says. “The next was executing the plan.”

One of the biggest changes involved his sleep routine. Patel was a night owl—he’d hit the gym at night, which meant he wouldn’t get to sleep until 1 a.m., then have to wake up for work a 6:30 a.m.. He decided to get up early instead, working out at 5:30 a.m. before work, then winding down for bed by 10 p.m.

“It has really changed my life in terms of productivity and even sleep quality,” he says.

He also stopped skimping on cardio. “I thought like so many gym bros that cardio would kill all my gains and I would end up skinny fat,” he says. 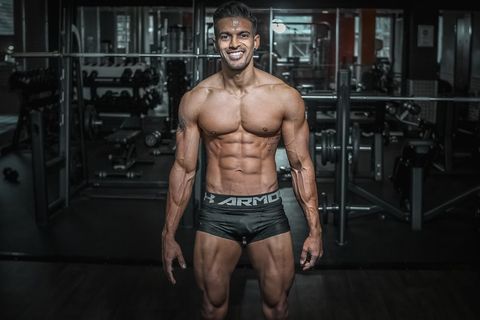 Instead, he began low-intensity, steady-state cardio. Within a few months, his resting heart rate had dropped from 69 to 50. His resistance training workouts improved, too, and stopped feeling sluggish and tired.

He stuck to his plant-based diet, but paid more attention to his calorie intake. Looking to lose fat but retain his muscle, he cut out junk food and ate more fruits and vegetables. Nightly meal prep kept him from straying from his diet during the busy workday.

In two weeks, he’d lost more than six pounds; at the end of 13 weeks, he’d lost almost 20 pounds. “I felt lighter on my feet, more alert and my gym performance had gone up significantly,” he says. 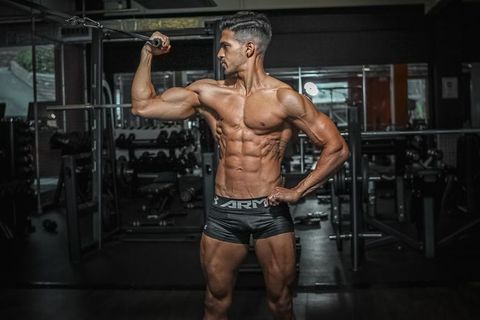 Looking at his before pictures, he almost couldn’t believe they were him.

“Patience is everything,” he says. Following a routine and trusting the process got him where he is—and doing it while vegan proved that you don’t have to eat meat to get ripped. “For anyone thinking of going vegan,” he says, “don’t feel that it will set you back in your training goals.”

Jesse Hicks
Jesse Hicks is a Detroit-based writer and former features editor at The Verge who specializes in longform stories about science, health, and technology.