On a recent Sunday morning in Waimanalo, a group of families representing three generations gathered to build an aquaponics set-up from scratch. By the end of the day, they had the makings of a system to grow vegetables and herbs and raise tilapia fish at their homes.

The MALAMA project, also known as Mini Ahupuaʻa for Lifestyle and Meaʻai ​through Aquaponics, builds upon work that the leader of local nonprofit has conducted for a decade: make fresh food accessible in as many backyards as possible using aquaculture and hydroponic technology.

The MALAMA project is bringing aquaponic farming to backyards in Waimanalo.

“The adults always fear it, because they think too much, but the kids look at it and say, ‘Oh, OK, we’re going to play, it’s like Lego,’” Ilima Ho-Lastimosa said. “They were like, ‘Oh, Aunty, that was so easy.’ As long as you have the parts together, all you need is a little bit of space, a little bit of water and lots of aloha.”

Ho-Lastimosa grew up on the Waimanalo Homestead and founded God’s Country Waimanalo, a group that focuses on local food sustainability.

Through her nonprofit’s initiatives and role as a community coordinator at the Waimanalo Learning Center, Ho-Lastimosa estimates more than 100 aquaponics systems have been added to the backyards of Native Hawaiian households over the past decade.

The University of Hawaii caught notice and has started gathering scientific evidence of the health benefits that come from a aquaponics system. The clinical study will assess how installing those systems can improve nutrition and reduce the disproportionately high prevalence of cardiovascular diseases and obesity among Native Hawaiian communities.

“As a community member I’m making sure that the clinical data is used in the right way,” Ho-Lastimosa said. “It’s informing us about Hawaiian health, which we know is kinda not so good, and how we can support to change some of the outlooks, and hopefully make some significant changes in diet. Family cohesion, working together and building community — that’s important to us.” 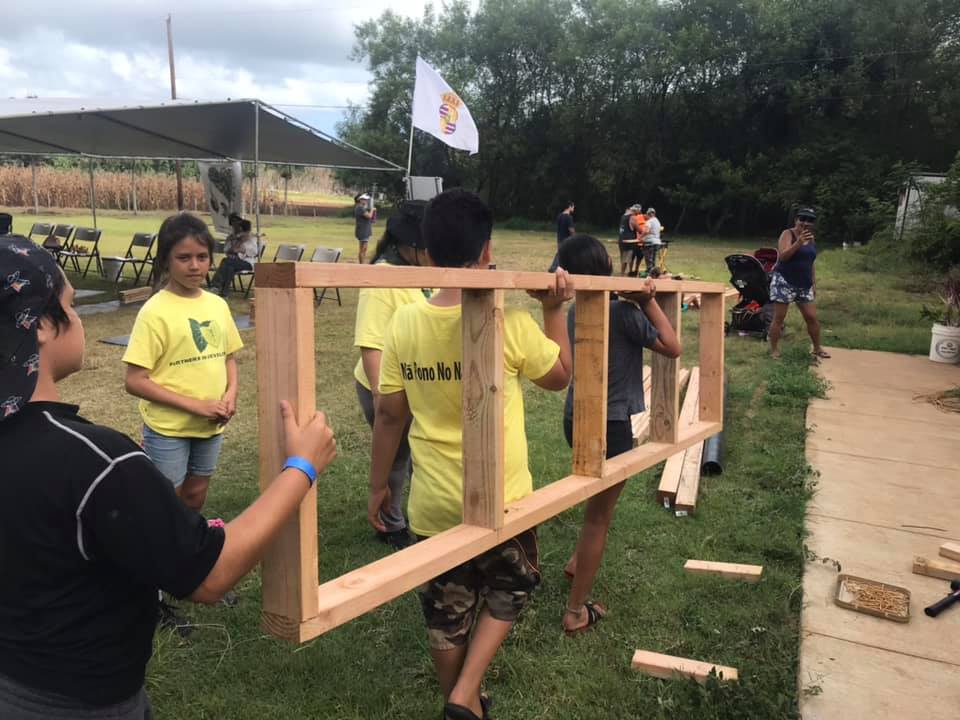 The University of Hawaii is conducting a clinical study of the benefits of backyard aquaponics in Waimanalo.

University of Hawaii Public Health Studies Associate Professor Jane Chung-Do first heard about the aquaponics movement in Waianae as a UH student, and now she leads the MALAMA research study as its principal investigator.

Aquaponics combines raising both plants and fish in a contained water tank system. The 3-by-8-foot wooden tables were built high “so we wouldn’t have to bend down,” says Rosalie Lenchanko, who built the system with her daughter and 11-year-old grandson.

The table holds three plastic water tubs for plants, and the fish mingle in tanks below. Once the system is running, they hope to grow lettuce, onions, Chinese parsley, and olena, or Hawaiian turmeric.

“It’s just like a regular fish tank, with a pump in there that sends oxygen into the water so the fish can live, and the fish will produce from their waste the nitrates filtered through the system,” she said. “All the nutrients from that water goes into the system and feeds the cinder rocks where we plant our plants.”

The clinical study’s preliminary results show Native Hawaiian families who participated in the program increased their daily intake of vegetables, fruit and fish by one cup after adopting the system. This year, the research team will expand clinical measures to include blood pressure, body mass index and blood sugar levels to further assess the health outcomes of aquaponics.

Home farming is a way to address the problems associated with having very few healthy eating options, said Chung-Do, who noted Waimanalo is considered a food desert.

“When you look at it from a statistical point of view, Waimanalo is underserved, but at the same time there’s so much community leadership and advocacy,” she said. “It’s a very strong close knit community, and that’s one of the reasons why a program like this works so well.” 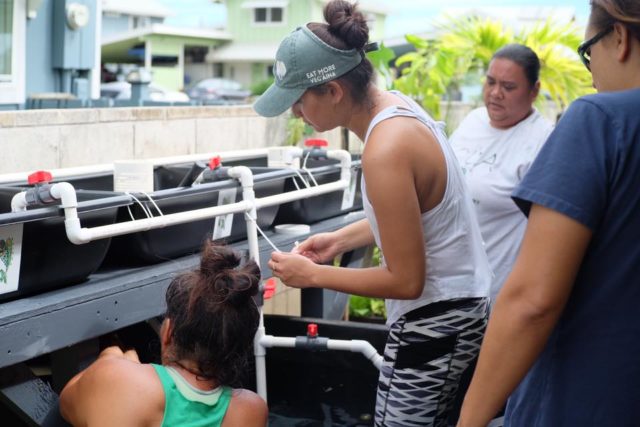 The aquaponics system kits are valued at about $600 each for the wooden table, three grow beds and tilapia fish. “We’ve been encouraging people to eat the fish,” said MALAMA principal investigator Jane Chung-Do.

It’s a model that she hopes to replicate across all Hawaiian Islands.

“Aquaponics is looking at an ahupuaa system in your backyard — you basically can go from the mountain to the ocean,” she said.

The goal is that families will grow not only their own meals but medicinal plants as well. Ho-Lastimosa conducts workshops that cover how to make natural remedies for sore throats or coughs from aquaponics crops. The recipes are rooted in the Hawaiian natural medicine practice of using medicinal plants for treatment, known as laau lapaau.

Lenchanko, 73, hopes to share her family’s home-grown plants and herbs with neighbors in the months to come.

“It gave us a chance to do something as an ohana,” she said.

Sign up for our FREE morning newsletter and face each day more informed.

Thanks! We’ll send you a confirmation e-mail shortly.

According to a new study published in the journal Nature Food, individuals can have …