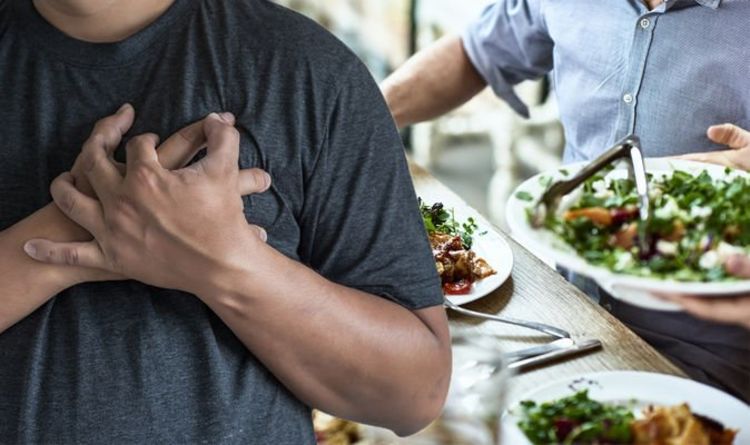 Heart attacks require immediate medical attention to minimise the amount of damage done to a person’s heart muscle. While heart attacks can happen suddenly, it tends to be an accumulation of unhealthy lifestyle decisions that lead up to the event. As more and more evidence emerges about the link between red and processed meats and heart disease, people are increasingly following a plant-based diet. A new study has revealed that halving the amount red and processed (RPM) meat in the diet can have a significant impact on health, reducing the amount of LDL ‘bad’ cholesterol in the blood which cuts the risk of developing heart disease.

Red and processed meats are typically high in saturated fatty acids which cause an increase in LDL cholesterol.

As the study explains, this is the “bad” cholesterol that collects in the walls of blood vessels, where it can cause blockages and raise the chance of a heart attack.

Researchers at the University of Nottingham wanted to find out if reducing the amount of red meat eaten, rather than cutting it out completely, would have a positive effect on the health of the subjects taking part.

The results, published today in the journal Food & Function showed that the most significant change was a drop in the amount of LDL cholesterol in the blood, and those with the highest levels in the beginning had the biggest drop.

Overall there was an average drop in LDL cholesterol of approximately 10 per cent with men (who tended to have the highest starting values) seeing the biggest change.

For this intervention trial, 46 people agreed to reduce their red meat intake over a period of 12 weeks by substituting it for white meat, fish or a meat substitutes, or by reducing the portion size of their red meat.

They kept a food diary during the study and were given blood tests at the beginning and intervals throughout.

Professor Andrew Salter, from the University of Nottingham’s School of Biosciences led the study and said: “With a high saturated fatty acid, content red and processed meat has been linked to heart disease, and other chronic diseases, particularly colon cancer. Studies have shown that in people who eat the most meat, there is a 40 per cent increased risk of them dying due to heart disease.

Adding: “The results of the present study showed that, even in relatively young and healthy individuals, making relatively small changes to RPM intake induced significant changes in LDL cholesterol which, if maintained over a period of time could potentially reduce the risk of developing heart disease.”

As well as reducing levels of LDL cholesterol, researchers were surprised to also see a drop in white and red cells in the blood.

Dr Liz Simpson from the University of Nottingham’s School of Life Sciences is co-author on the study, she explained: “Meat is a rich source of the micronutrients (vitamins and minerals) required for the manufacture of blood cells, and although it is possible to obtain these nutrients in plant-based diets, our results suggest that those reducing their meat intake need to ensure that their new diet contains a wide variety of fruit, vegetables, pulses and whole grains to provide these nutrients.”

This finding follows recent research published in the the Journal of the American Heart Association that revealed eating mostly plant-based foods and fewer animal-based foods may be linked to better heart health and a lower risk of dying from a heart attack, stroke or other cardiovascular disease.

“While you don’t have to give up foods derived from animals completely, our study does suggest that eating a larger proportion of plant-based foods and a smaller proportion of animal-based foods may help reduce your risk of having a heart attack, stroke or other type of cardiovascular disease,” said lead researcher, Casey M. Rebholz, Ph.D., assistant professor of epidemiology at Johns Hopkins Bloomberg School of Public Health, Baltimore, Maryland.

Researchers reviewed a database of food intake information from more than 10,000 middle-aged U.S. adults who were monitored from 1987 through 2016 and did not have cardiovascular disease at the start of the study.

They then categorised the participants’ eating patterns by the proportion of plant-based foods they ate versus animal-based foods.

People who ate the most plant-based foods overall had a:

While the study is the first to compare plant and meat-based dietary patterns, future research on plant-based diets should examine whether the quality of plant foods – healthy versus less healthy – influences cardiovascular disease and death risks, said Rebholz.

What are the symptoms of a heart attack?

According to the NHS, symptoms may include: