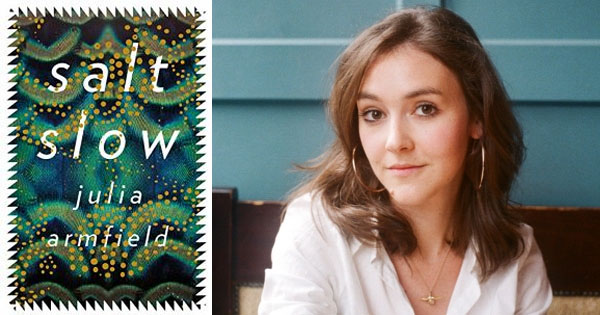 In Julia Armfield’s unsettling, uncanny, and utterly delightful debut, Salt Slow, wolves, mythological monsters, and seemingly ordinary girls and women abound. In “Formerly Feral,” a girl’s neighbor from across the street adopts a wolf and names her Helen. When the girl’s parents divorce, her father remarries the neighbor and she gains a new stepsister in Helen, and the two develop a deep bond. In “Stop Your Women’s Ears with Wax,” Mona is on tour supporting a popular girl band making music that inspires violent desires in their young female fans. Black feathers in their dressing room hint at their more sinister true identity. Armfield discusses body horror, specifically in relation to the female body.

In Sharlene Teo’s wise, tenderly grotesque novel Ponti, the introduction of teenaged protagonist Szu is effected in a cloud of body odor. “When I was eleven,” Szu grumbles, sitting in a classroom that smells of Impulse body spray and soiled sanitary towels, “I used to hope that puberty would morph me, that one day I’d uncurl from my chrysalis, bloom out beautiful. No luck! Acne instead. Disgusting hair. Blood.” Overflowing with monsters and matriarchs, Teo’s novel is at least partially a horror narrative and draws much of its impetus from the backstory of Szu’s mother, Amisa, a former horror actress, who once starred in a movie named Ponti! The film, telling the story of a deformed girl who makes a deal with a bomoh—a shaman—to become beautiful, pins the theme of transformation at the novel’s heart. Her wish is granted, but the transformation is a dual one. She does become beautiful, but she also becomes a bloodthirsty monster who feeds insatiably upon men. Teo’s novel stresses this duality, writing female adolescence as, in effect, synonymous with female monstrosity, with the becoming of something other. Szu is nicknamed Sadako, after another classic horror movie monster, and her adolescence is a lank, disquieting thing, at once disappointing and horrendous. She is turning into a woman, she is turning into a monster; the two things are one and the same.

“Body Horror,” as an official designation, is a term that comes from horror cinema but its literary origins can be traced back as far as Frankenstein. It is a trope that springs from primal fears—from the knowledge of oneself as a physical object and the consciousness of pain—and its roots wind through the Gothic, to the fin de siècle and the birth of science fiction. As a sub-genre, it broadly encompasses the concept of bodily violation, whether that be via mutilation, zombification, possession, or disease, but arguably one of its most pervasive themes is that of transformation. From Ovid to Cronenberg, transformation occupies an anxious corner in so much of film and literature that it more or less forms a tradition all its own. Folklore and myth are littered with metamorphosis—Daphne twisting into a bay tree, Alice in Wonderland with her Eat Me’s and Drink Me’s—and its impact is frequently an unsettling one. It is a fairy-tale punishment, a warning to naughty children, a reminder of the body’s unreliability.

In talking about Salt Slow, my short story collection, I have found myself returning frequently to the concept of the body, particularly the body as a locus of fear. The majority of stories in the collection are built on body horror and transformation, concerning women and the ways in which their bodies both contain and betray them: a girl whose teenaged skin is hiding something terrible, a woman taking on the aspect of a jellyfish, a woman birthing something slippery. I think that writing about women goes hand in hand with horror writing. The female body is a nexus of pain almost by design (that by-now ubiquitous line from Fleabag: “women are born with pain built in, it’s our physical destiny”), but it is also potentially monstrous—an object traditionally subjugated, both for its presumed weakness and its perceived threat. The mutations and transformations of horror writing are uniquely qualified to evoke this: the difficulty and unreliability of the female body, its duality as an object both to be feared for and to fear.

When Daphne transforms into a bay tree, the moment is one of both horror and deliverance. She is no longer what she once was, but the metamorphosis frees her from the unwanted attention of Apollo. This duality of horror and emancipation sits, I think, at the core of female transformation. Within the horror genre (and arguably everywhere else), bodies read as female are always subject to pain, and to the threat of violation. Becoming something else—a tree, a freak, a monster—preempts this pain and reduces the risk of harm. It may even, if the transformation is the right one, allow you to cause harm in return.

As made evident in Teo’s Ponti, female adolescence is frequently a site of horror. It is, after all, the “transformation” aspect of the body horror trope made literal. Over and over, in books and in movies, girls are made subject to the bleedings and stretchings of adolescence: that werewolf period where the body becomes an othered version of itself (the horror movie Ginger Snaps comes to mind—the protagonist’s first period coinciding with her transformation into something hairy and ill-tempered). Often, the horror of this alteration is fed by misinformation—the teenaged girls I find myself writing about frequently haven’t been told. Adolescence is frightening enough on its own, but the strange, puritanical sketchiness that consistently surrounds sex and sex education only serves to heighten the panic. In Jeffrey Eugenides’s The Virgin Suicides, a teenaged boy relays to his friends a jumbled impression of the informational “puberty” video he has stolen into a Girls Only class to watch: “When girls hit twelve or so,” he tells them breathlessly, “their tits bleed.” A monster, created by whispers.

In my short story “Mantis,” a Catholic schoolgirl’s troubled teenaged skin extends far beyond acne. In between receiving woefully outdated sex education and attempting to navigate a newfound interest in boys, the protagonist loses teeth and hair, watching her skin come away in pieces to reveal something altogether buggier beneath. The transformation is a horror, of sorts, but it is also an emancipation—once freed from her physical strictures, the protagonist can act in a way that is natural to her (can do to a boy what a praying mantis would normally do to her chosen mate). This sense of transformation as, in a sense, a moment of freedom is not new. From certain representations of Lilith to Lucy Westenra, unloosed female power is often linked to a transformation into the monstrous, a shucking of one skin for another. Teenagers shed their younger selves for the relative power of womanhood, women shed their skins to take on fresh, more threatening aspects. In another story from my collection, a girl begins to take on attributes of her newly acquired stepsister, who happens to be a wolf. Whilst it isn’t a transformation, in a physical sense, her newly feral traits allow her to contend far more effectively with the teenaged boy who has started following her home. In this case, as in many others, the “transformation” is somewhat an active choice: looking at the possibilities presented to your body—pliancy, weakness, suffering—and choosing another option. Changing into a vampire, a wolf, a praying mantis, and eating people instead.

There is another aspect to transformation—or rather, another level. In Katherine Dunn’s Geek Love, a mother experiments with cocktails of drugs and hallucinogens to achieve what she perceived as a perfect brood of “mutant” children to display at the family carnival. The extremity of transformation, here, conveys status and happiness, with “normality” considered a failing. “I get glimpses of the horror of normalcy,” notes the protagonist, “Each of these innocents on the street is engulfed by a terror of their own ordinariness. They would do anything to be unique.”

In my story “Salt Slow,” a woman gives birth to something that might not be quite human—a tentacled creature which her boyfriend tries, and ultimately fails, to destroy. The transformation here, and in Geek Love, manifests in the child rather than the mother—an inherited transformation, so to speak. Transformation, in this sense, can be not only an active choice but one to pass on—the act of becoming, or of siring, a monster a means of reclaiming control over the female body. Within the scaffolding of the body horror trope, female bodies are arguably presented with unprecedented choice: they can be at once unstable, vulnerable, suffocating, difficult, frightening, monstrous, and changing right before your eyes.