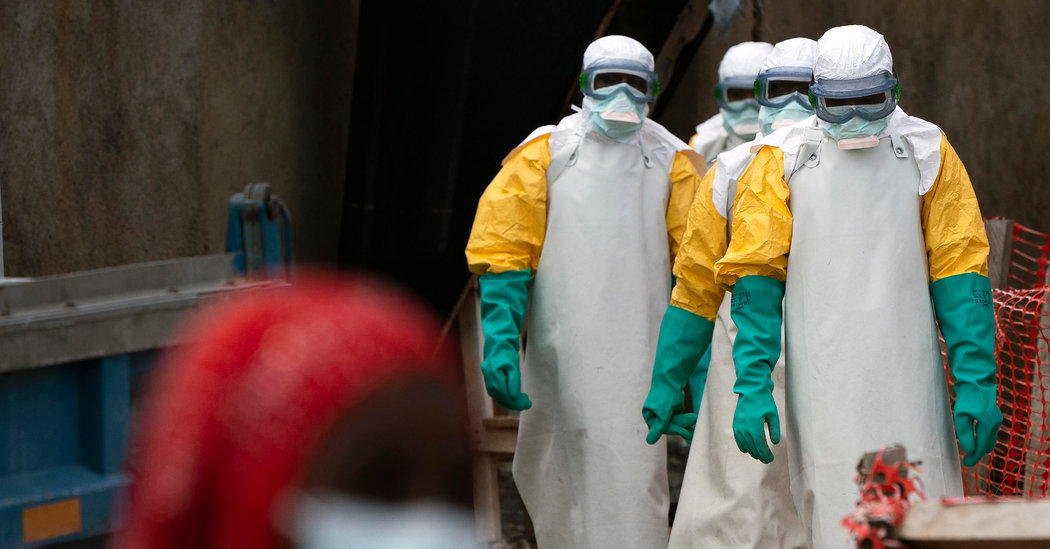 The Ebola outbreak in the Democratic Republic of Congo is still a public health emergency and will be one for at least the next three months, the World Health Organization said on Friday.

At the same time, “We believe we are on what could be a bumpy road to zero” new infections, said Dr. Michael Ryan, the agency’s director of emergency response.

Confirmed new cases, which peaked in April at nearly 130 a week, have fallen to relatively low levels. There were only 15 tallied in the last week, which the W.H.O.’s most recent update called “encouraging.”

But hot spots keep springing up in Congo. Most of the 50 new cases reported from late September to mid-October were in or connected to the Biakato Mine area, where both legal and illegal mining operations take place.

Armed guards, violence and robberies are common in the remote encampments, where desperate men dig in open pits or barely shored-up tunnels for gold, diamonds and other minerals. There is very little public education about the virus in the region.

As of Tuesday, there have been 3,227 confirmed or probable cases and 2,154 deaths since the outbreak began in August 2018, so the fatality rate is still high at 67 percent, despite the rollout of two highly effective treatments.

The treatments — infusions of antibodies — work only if they are given soon after a patient is infected.

The W.H.O.’s advisory committee declared the outbreak a public health emergency of international concern on July 17.

Part of the reason it did so then — after hesitating for nearly a year — was to help raise money from donor nations that seemed to be losing interest.

Money is still a problem. The W.H.O.’s director general, Tedros Adhanom Ghebreyesus, said the agency had asked for $394 million for the current phase of the response, but had received only $126 million so far. More has been pledged, but there is still a large shortfall, he added.

For a separate category — preparedness in nearby countries — the agency asked for $66 million and has received less than $5 million, “so it’s not even close,” Dr. Tedros said.

“Preparedness saves lives and saves money,” he said, citing Uganda’s rapid containment of its first cases of Ebola as an example. “But people don’t see this as an emergency.”

Ebola is not even the most lethal threat Congo is facing, he said. Since January, there have been 4,065 deaths from measles there, despite a vaccine drive that has reached three million children.

Another 375 Congolese have died of cholera this year, and 20,773 have been infected despite the distribution of 800,000 doses of vaccine. And malaria normally kills nearly 50,000 people each year in Congo, most of them children under age 5 and pregnant women.

What happened in Tanzania recently remains a mystery, but there is no evidence that an Ebola outbreak is underway there, W.H.O. officials said.

On Sept. 10, rumors emerged that there were one or several Ebola cases in Dar es Salaam, the country’s largest city.

The Tanzanian Health Ministry repeatedly said that its laboratories had not found any positive cases. But officials refused to share blood samples with the network of top-level W.H.O. reference laboratories set up around the world, or to let the team that the agency sent to the country test the patients.

Now that 40 days — the equivalent of two incubation periods — have passed with no more reported cases, it seems unlikely that any outbreak is underway, Dr. Ryan said.

But “the lack of full information from Tanzania has been a frustration,” he added.

Merck, which makes the most widely used Ebola vaccine, announced Friday that it had picked a name for it: Ervebo. It was previously known as rVSV-ZEBOV, short for “recombinant vesicular stomatitis virus — Zaire Ebola virus.”

The vaccine moved closer to licensure this week as an advisory panel to the European Medicines Agency recommended that it be approved for marketing.

Although more than 230,000 doses have been dispensed in the current outbreak and there is strong evidence that it works, the vaccine is still legally considered experimental.