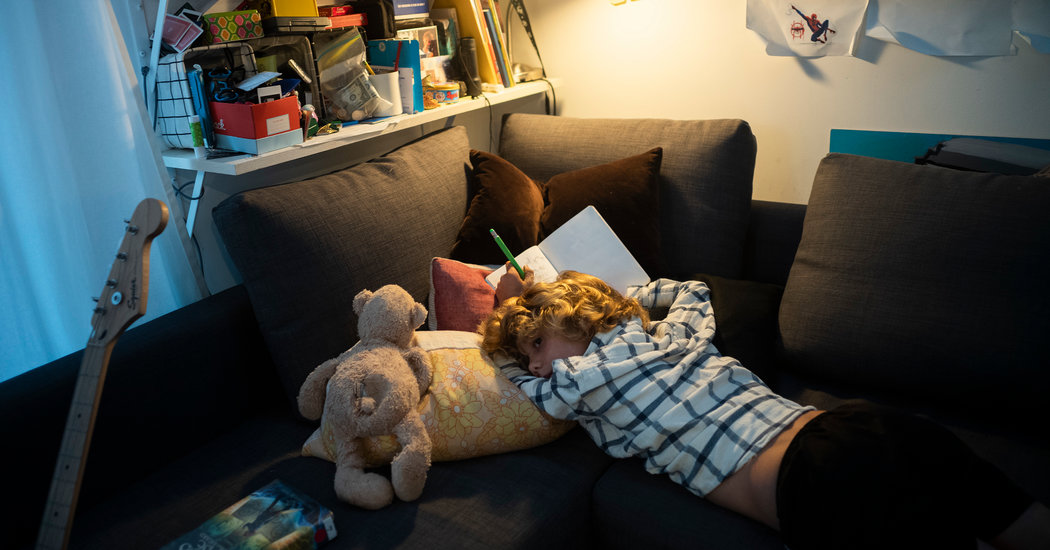 About 10 days after what seemed like a garden-variety cold, Luca Waugh, a healthy 4-year-old, developed troubling symptoms.

Suddenly, his neck became so weak that he fell backward. Then his right arm couldn’t move. Within days, recalled his mother, Dr. Riley Bove, he developed “head-to-toe paralysis, where he could kind of move his eyes a little bit and one side of his face.”

Doctors diagnosed Luca with acute flaccid myelitis or A.F.M., a mysterious neurological condition that can cause limb weakness and polio-like paralysis, mostly in young children. A.F.M. is rare, but in 2014, when Luca became afflicted, health authorities identified a burst of 120 cases. Since then, A.F.M. has made headlines as cases have spiked every two years, and nearly 600 have been confirmed across the country since 2014.

What exactly causes A.F.M. has eluded experts, frustrating attempts to prevent or treat it.

Now, a study by a team that includes Luca’s mother, Dr. Bove, who happens to be a neurologist, provides strong evidence of a likely cause. It involved dozens of children with A.F.M., including Luca, whose paralysis improved after weeks of hospitalization but who remains disabled five years later.

The research, published Monday in the journal Nature Medicine, points to a long-suspected culprit: enteroviruses, a group of common viruses that usually produce mild effects, but can sometimes cause neurological symptoms. Using sophisticated laboratory techniques, researchers found antibodies to enteroviruses in the cerebrospinal fluid of nearly 70 percent of the children with A.F.M., a sign their bodies had mobilized to defend against enterovirus infection.

By comparison, the team, led by researchers from the University of California, San Francisco, found enterovirus antibodies in only 7 percent of children with other neurological illnesses.

“This takes us a lot further than we have been,” said Dr. Avindra Nath, a senior investigator for the National Institute of Neurological Disorders and Stroke, who was not involved in either study. “Coming from two entirely different laboratories with two entirely different techniques, we are now at the point where we can say we have a candidate virus to study.”

Enteroviruses have been suspected in A.F.M., partly because of its similarity to polio, a type of enterovirus now vanquished by vaccines in most countries, including the United States. Also, the recent every-other-year A.F.M. surges have occurred between August and October, when certain enteroviruses flourish.

The strongest suspect has been enterovirus D68 (EV-D68) because the Centers for Disease Control and Prevention has found that increased A.F.M. cases often coincided with greater prevalence of EV-D68. Also, EV-D68 can produce A.F.M.-like symptoms in mice. Another possible suspect is enterovirus A71 (EV-A71).

And while enteroviruses have been detected in stool and respiratory mucus of some A.F.M. patients, substantiating a role in neurological disease requires evidence involving cerebrospinal fluid, which circulates in the brain and spinal cord. But enteroviruses dissipate quickly from this fluid. The C.D.C. has found enteroviruses (EV-D68, EV-A71 or Coxsackievirus) in cerebrospinal fluid in only four of the 590 cases since 2014.

The Nature Medicine study involved nearly 500,000 DNA protein fragments from thousands of viruses that infect humans and other vertebrates or are carried by mosquitoes and ticks, said the senior author, Dr. Michael R. Wilson, a U.C.S.F. neurologist specializing in mysterious neurological illnesses.

Using a technique called phage display, each fragment was inserted into a bacteriophage, a type of virus that sticks to bacteria. Each bacteriophage displayed a specific fragment on its surface like a billboard. Then the researchers incubated a “soup” of bacteriophages with a patient’s spinal fluid sample, Dr. Wilson said.

“You let the patient’s antibodies find the virus that’s expressing the DNA that matches, and they bind,” he said.

Enterovirus antibodies were found in 29 of 42 children who developed A.F.M. across the country in 2014, 2016 and 2018. One was Luca. After he got sick in Boston in 2014, Dr. Bove, then at Harvard Medical School, sent his samples to Dr. Wilson, a friend she met during medical training.

Only four of 58 children with other types of neurological diseases had enterovirus antibodies.

“It’s a really cool technique,” said Dr. Ruth Lynfield, Minnesota’s state epidemiologist and co-chair of the C.D.C.’s A.F.M. task force. “They have this magnificent array where they can screen against large numbers of viruses and proteins and they found that A.F.M. was associated specifically with enterovirus.”

In another test, the team, which involved many institutions, found evidence of a viral protein associated with EV-D68 and EV-A71, but couldn’t get more specific.

The Columbia study, published in the journal mBio, found a clearer EV-D68 signal.

“We think that D68 is where the action is,” said the senior author, Dr. W. Ian Lipkin, director of the Center for Infection and Immunity at Columbia’s Mailman School of Public Health. “We’re saying it looks like a duck and it quacks, and it’s a duck.”

Using a type of chip tiled with thousands of protein fragments from viruses, his group found enterovirus antibodies in 11 of 14 A.F.M. patients, compared to only three of 16 patients with other neurological diseases. And a protein sequence specific to EV-D68 was found in spinal fluid of six A.F.M. patients and blood of eight A.F.M. patients.

She and Dr. Nath, also a member of the A.F.M. task force, said that to confirm the finding, similar studies should be run during future A.F.M. bursts, next expected in August to October of 2020. Pinpointing a specific enterovirus could lead to medications or a vaccine.

Many questions remain: Are A.F.M. cases surging every other year because of something about enteroviruses or human immunity? Why does the smattering of A.F.M. cases in off-peak years appear to have more varied causes?

And why do so few children develop A.F.M. when many are exposed to enteroviruses? Several scientists are researching possible genetic reasons. Still, even siblings, like Luca’s younger brother Mazi, who had the same cold, often don’t develop any paralysis or weakness.

Luca’s current condition is similar to many children with A.F.M., who suffer from asymmetrical bone development, muscle weakness, pain and uncoordinated movements, said Dr. Bove, now at U.C.S.F. In a recent study she co-authored about the experience of children with A.F.M., only two of 82 children were described by their parents as having completely recovered.

“He has one leg that’s shorter and skinnier than the other; he trips a lot,” Dr. Bove said. He has a “tiny, short little flimsy right arm and shoulder,” needs regular physical therapy, and during activities like running, climbing stairs or riding in the car, “he wears a neck brace because his neck is very floppy like a baby’s,” she said.

Still, while he cannot participate in most sports, he rides an adaptive bike and plays soccer on a team with other children with disabilities. He talks openly about his condition and is often optimistic, she said.

“He’ll tell me how heartbroken and disappointed he is that he can’t do something and then the next day he’ll have a new goal,” said Dr. Bove. “He’s kind of like a little fighter dude.”