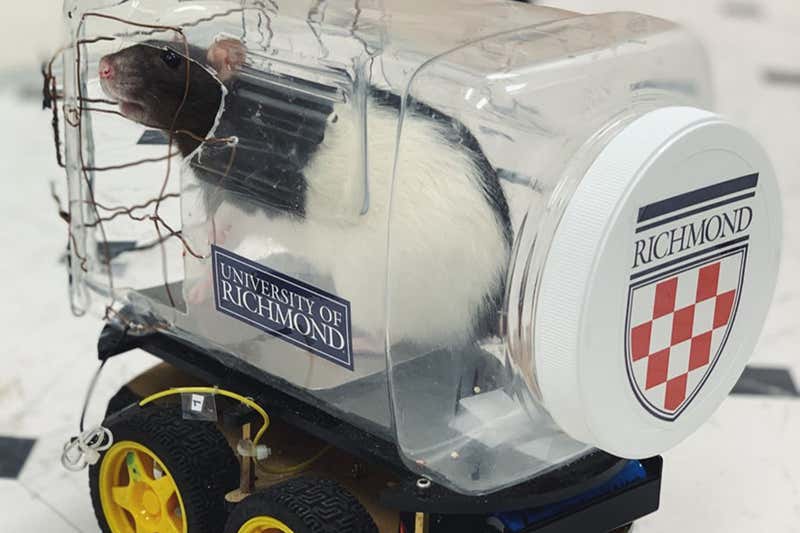 Researchers at the University of Richmond in Virginia trained rats to hop into little cars and drive them to collect food. The rats’ success suggest their brains have more plasticity than previously assumed.

They constructed a tiny car out of a clear plastic food container on wheels, with an aluminium floor and three copper bars functioning as a steering wheel. When a rat stood on the aluminium floor and gripped the copper bars with their paws, they completed an electrical circuit that propelled the car forward. Touching the left, centre or right bar steered the car in different directions.

Six female and 11 male rats were trained to drive the car in rectangular arenas up to 4 square metres in size. They were rewarded with Froot Loop cereal pieces when they touched the steering bars and drove the car forward.

The team encouraged the rats to advance their driving skills by placing the food rewards at increasingly distant points around the arena. “They learned to navigate the car in unique ways and engaged in steering patterns they had never used to eventually arrive at the reward,” says [Kelly] Lambert.

Mark Frauenfelder is the founder of Boing Boing and the founding editor-in-chief of MAKE. He is a research director at <a href="Kevin J. Anderson has written more than 125 books, including 52 national or international bestsellers. He has over 23 million books in print worldwide in thirty languages. He has been nominated for the Nebula Award, Bram Stoker Award, Shamus Award, and Silver Falchion Award, and has won the SFX Readers' Choice Award, Golden Duck Award, Scribe Award, and New York Times Notable Book; in 2012 at San Diego Comic Con he received the Faust Grand Master Award for Lifetime Achievement. He is a research director at Institute for the Future and editor-in-chief of Cool Tools and co-founder of Wink Books. Twitter: @frauenfelder.