December 05, 2022
Trending
Home Health News Two Strains of Polio Are Gone, but the End of the Disease Is Still Far Off – The New York Times 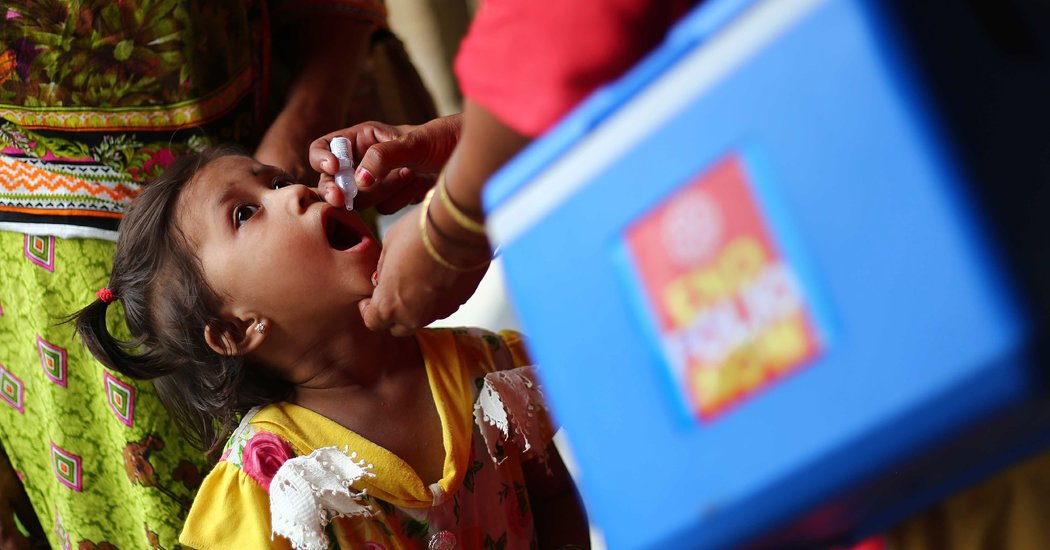 In another milestone on the long, expensive and sometimes discouraging road to wiping out polio, global health officials announced Wednesday that two of the three strains of wild polio virus have officially been eliminated.

Although that brings the world another step closer to eradication, the effort has taken far longer than was ever anticipated. When the campaign began in 1988, most public health officials and donors expected the battle to be over by 2000.

First, millions of families around the world have not let their children have the drops because of persistent false rumors that the vaccine is a Western plot to sterilize Muslim girls or do other harm.

Second, in some countries viruses used in the oral vaccine itself have mutated into a form that can be passed on in diapers and sewage, and can paralyze unvaccinated children. That has contributed to fear of the oral vaccine, even though full vaccination is the only protection against such mutant viruses.

Just in the last two months, cases of paralysis caused by mutant vaccine viruses have been reported in the Philippines, Zambia, Togo and Chad. Because paralysis occurs in only about one in every 200 cases of polio, experts assume many more children have been infected.

Stopping such outbreaks typically requires vaccinating hundreds of thousands of children with both the injectable vaccine, which contains killed virus that cannot mutate, and the oral vaccine. The latter contains weakened viruses that normally cannot cause disease but provide better protection than killed viruses.

Type 1, the only wild strain left, circulates only in Pakistan and Afghanistan.

(In the 1950s, the three strains had more evocative names: Brunhilde, Lansing and Leon. The first was named after a lab chimpanzee, the second after the Michigan city where it was isolated, and the third after a Los Angeles boy who died of it. The nicknames later fell out of favor.)

Enormous, multiyear surveillance efforts are required before a viral strain can be declared extinct. Children can be paralyzed by several other viruses, by bacterial brain infections and by neck and spine injuries.

To ensure that polio was not the cause, stool samples must be taken from more than 100,000 paralyzed children every year. Thousands of sewage and water samples are drawn in 70 countries; the virus can be detected at parts-per-million concentrations.

“The certification commission has been very, very careful,” said Dr. Walter A. Orenstein, a polio expert at Emory Vaccine Center in Atlanta and former immunization director at the Centers for Disease Control and Prevention.

In the last decade, a dangerous new front has opened in the war on polio.

In countries where vaccination rates are low, the weakened viruses in the oral vaccine can circulate in wastewater and mutate into what are effectively evil twins of themselves.

By piling up random genetic changes, or by swapping genes with other intestinal viruses like Coxsackie virus, viruses can become virulent again and paralyze children who have never been vaccinated.

In the last two years, outbreaks of cVDPV — which stands for “circulating vaccine-derived polio virus” — have struck nearly 20 countries.

Although most of those outbreaks have been small and eventually were contained, more children are now paralyzed by cVDPV each year than by Type 1 in Pakistan and Afghanistan.

To prevent that, the eradication campaign is taking several steps.

First, health officials are trying to see that every child in the world gets at least one dose of the injected vaccine. It circulates in the blood, so a child can still get — and spread — a gut infection but won’t be paralyzed by it.

Second, a year after Type 2 polio was eliminated worldwide, the campaign rolled out a new “bivalent” vaccine lacking the Type 2 weakened virus.

But there will be no “monovalent” vaccine with only Type 1 weakened virus, said Michel Zaffran, director of polio eradication at the World Health Organization.

“The Type 2 was so powerful that it dominated the old vaccine,” he said. “Removing Type 3 will not make the current one more immunogenic.”

It was a bureaucratic nightmare, he added, to get every country in the world to import and refrigerate hundreds of millions of new vaccine doses and safely destroy their old ones.

Third, the Bill and Melinda Gates Foundation is supporting the creation of new oral vaccines less able to mutate into dangerous forms.

“Tightening the loose ends” by cutting some nucleotides out of the part of the genome that acts as a gatekeeper leaves it less likely to swap genes with other gut viruses, said Dr. Ananda S. Bandyopadhyay, a polio program officer at the foundation.

In addition, rearranging the genes that create the polymerase, which helps the virus copy itself, means fewer “copying errors” that may be dangerous.

Because most recent outbreaks have been caused by mutant versions of Type 2, the foundation has fast-tracked clinical trials on that strain of the new vaccine, Dr. Bandyopadhyay said.

Novel versions of Type 1 and Type 3 vaccines should follow in another couple of years, he said.

The new versions are not intended for routine vaccination, he said, but for an emergency stockpile used to fight outbreaks.