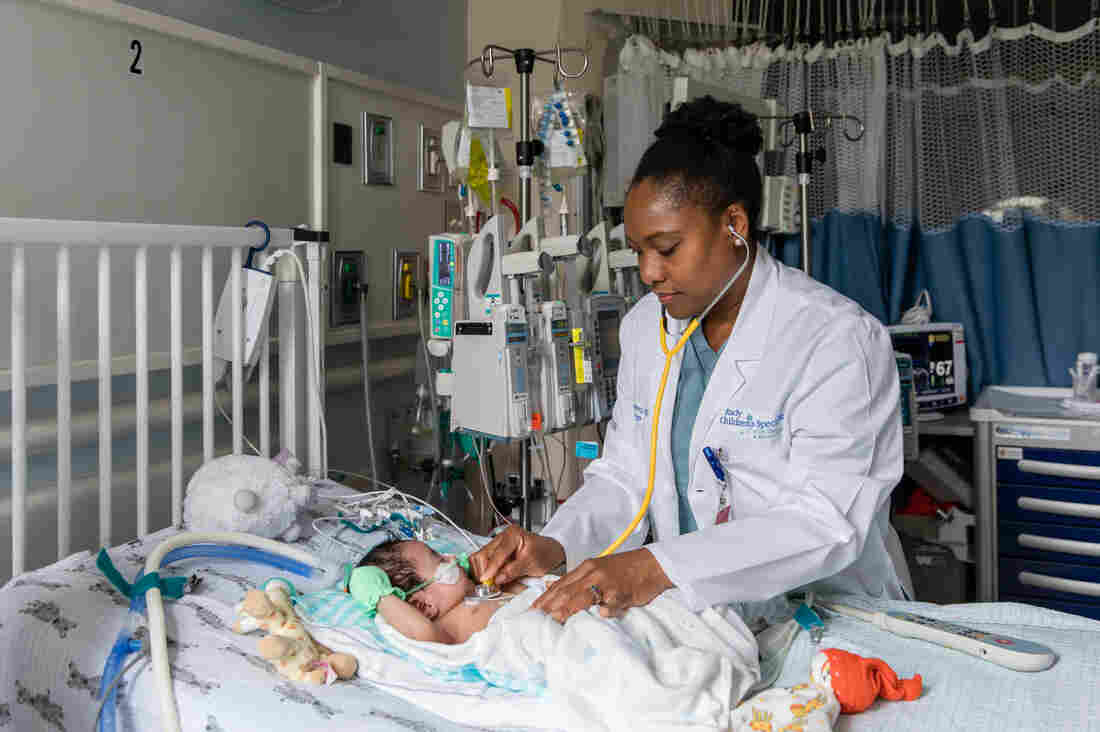 Nathaly Sweeney, a neonatologist at Rady Children’s Hospital-San Diego and researcher with Rady Children’s Institute for Genomic Medicine, attends to a young patient in the hospital’s neonatal intensive care unit.

When Nathaly Sweeney launched her career as a pediatric heart specialist a few years ago, she says it was a struggle to anticipate which babies would need emergency surgery or when.

“We just didn’t know whose heart was going to fail first,” she says. “There was no rhyme or reason who was coming to the intensive care unit over and over again, versus the ones that were doing well.”

Now, just a few years later, Sweeney has at her fingertips the results of the complete genome sequence of her sickest patients in a couple of days.

That’s because of remarkable strides in the speed at which genomes can be sequenced and analyzed. Doctors who treat newborns in the intensive care unit are turning to this technology to help them diagnose their difficult cases.

Sweeney sees her tiny patients in the neonatal intensive care unit of Rady Children’s Hospital in San Diego. Doctors there can figure out what’s wrong with about two-thirds of these newborns without a pricey DNA test. The rest have been medical mysteries.

“We had patients that were lying here in the hospital for six or seven months, not doing very well,” she says. “The physicians would refer them for rapid genome sequencing and would diagnose them with something we didn’t even think of!”

Rady’s Institute for Genomic Medicine, which has been pioneering this technology, has now sequenced the genomes of more than a thousand newborns.

In a building across the street from the hospital, three million-dollar sequencing machines form the core of the operation. Technicians tending to the NovaSeq 6000s can put DNA from babies (and often their parents) into the machine in the late afternoon and have a complete genome sequence back by 11 a.m. or noon the next day, says clinical lab scientist Luca Van der Kraan.

That fact is worth repeating: An entire genome is decoded in about 16 hours.

Kasha Ellsworth is one of the experts waiting in a nearby office to analyze the information. That task that has shrunk from months to typically just four hours, thanks to increasingly sophisticated software.

Ellsworth inputs the baby’s symptoms into the software, which then spits out a long list of genetic variants that might be related to the illness. She scrolls down the screen.

“I’m looking through a list of those variants and then basically deciding whether something may be truly contributing to the disease or not,” she says.

About 40 percent of the time, a gene stands out, giving doctors a tentative diagnosis. Follow-up tests are often requested, and those can take several days. But in the meantime, doctors can sometimes act on the information they have in hand.

When she or a colleague make a diagnosis, “You always feel very relieved, very happy and excited,” she says. “But at the same time you kind of need to put it in perspective. What does it mean for the family, for the patient, for the clinician as well?”

Often it’s a sense of relief. And for a minority of cases, it can affect the baby’s treatment.

“We now are at the point where I think the evidence is overwhelming that a rapid genome sequence can save a child’s life,” says Dr. Stephen Kingsmore, the institute’s director and the driving force behind this revolution.

By his reckoning, the results change the way doctors manage these cases about 40% of the time.

Treatments are only available for a small share of these rare diseases. In other cases, the information can help parents and doctors understand what’s wrong with their baby even if there is no treatment, or learn if death is inevitable, “And there’s it’s a very different conversation,” Kingsmore says. “We help guide parents through picking an appropriate point at which to say enough is enough,” and to end futile treatments.

Of course, Kingsmore highlights the happier outcomes. One example is a bouncy girl named Sebastiana, now approaching her third birthday. 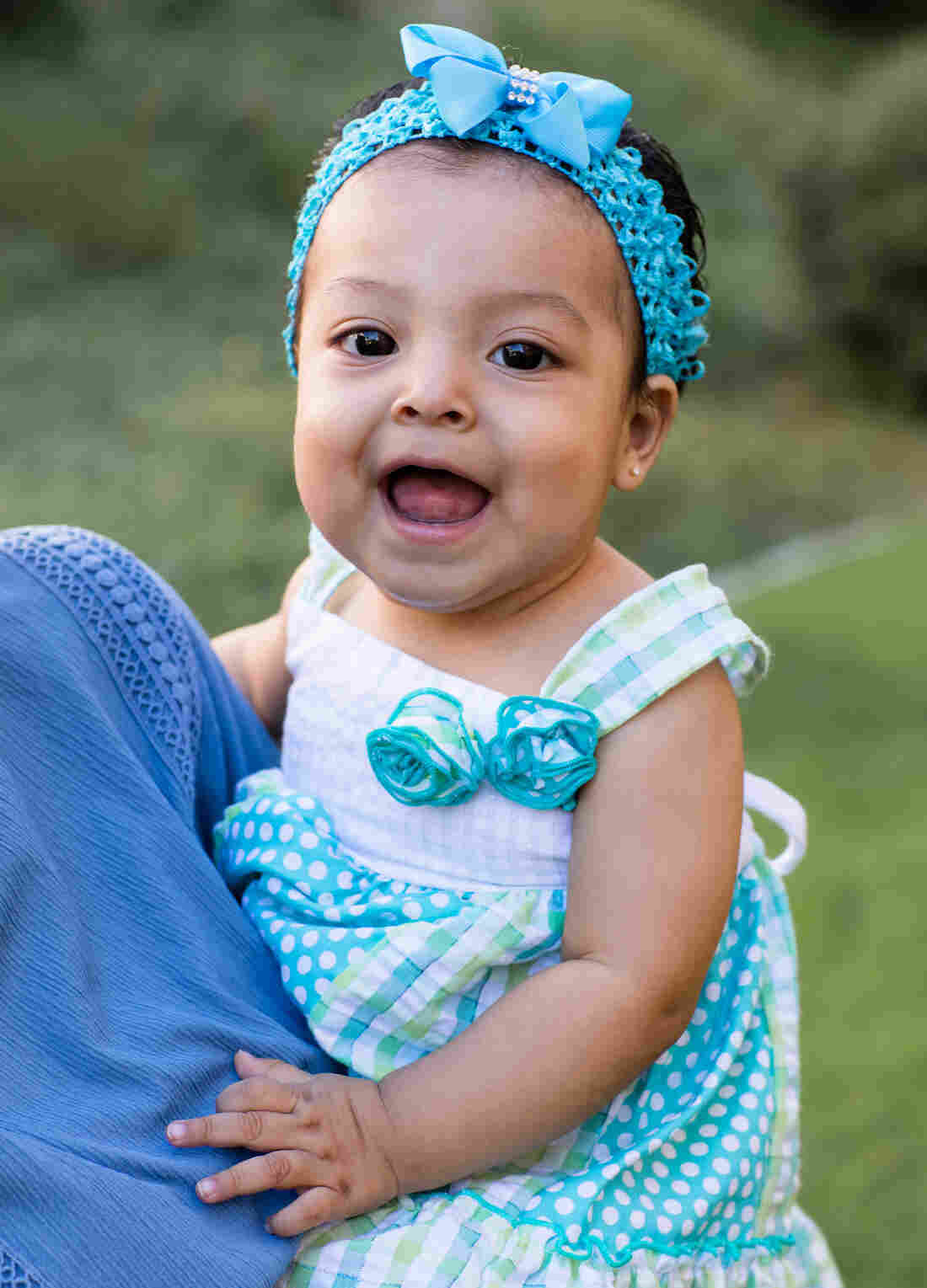 As a newborn, Sebastiana Manuel was diagnosed with a rare disease after rapid genome sequencing. She is seen here at 11 months of age.

He showed off her case recently in front of the Global Genes conference, a meeting of families with rare genetic conditions.

“She was critically ill in our intensive care unit,” he tells the audience, “and in a couple of days we gave the doctors the answer. It’s Ohtahara syndrome. It comes with this specific therapy. And she hasn’t had a seizure in two and a half years. She doesn’t take any medication.”

The audience applauds enthusiastically at an outcome that sounds miraculous. But when you meet Sebastiana and her mother Dolores Sebastian, a more complicated story emerges.

Ohtahara syndrome isn’t actually what made the child ill – it’s a term doctors use to describe newborn seizures. Those are actually a symptom of deeper brain issues. That was apparent the day she was born.

“She was acting weird and screaming and crying and turning purple and we weren’t sure why,” her mother says.

The hospital where Sebastiana was born rushed her to the neonatal intensive care unit, across town at Rady. She was having frequent seizures. The following days were a nightmare for Dolores and her husband.

“I can’t even describe it,” she says. “I always keep on saying that at that moment I was kind of like dead, but I was walking.”

The hospital ran a battery of tests to look for severe brain damage. They couldn’t get to the bottom of it.

“They came in and offered us the genomic testing,” Dolores said. “They never told us how quick it would be.”

She was surprised when the results were back in four days. The doctor told her they had identified a gene variant that can trigger seizures as well as do other harm to the brain.

“He said this is how we’re going to go ahead and change her medications now and treat her,” she says. And that made a “huge difference, [an] amazing difference.”

Sebastiana was already on a medication that was helping control her seizures, but they sedated her to the extent that she needed a feeding tube. On the new medication, carbamazepine, she was alert and able to eat, and her seizures were still under control. Dolores says her daughter is still taking that drug.

Controlling her seizures isn’t a cure. Children who have this genetic variant, in a gene called KCNQ2, can have a range of symptoms, from benign to debilitating. Sebastiana falls somewhere in between. For example, she has only a few words in her vocabulary as she approaches the age of 3.

“She took her first steps when she was 2 years old, so she’s delayed in some things,” Dolores says, “but she’s catching up very quickly. She has P.T. [physical therapy], she’s going to start speech therapy. She gets a lot of help but everything’s working.” 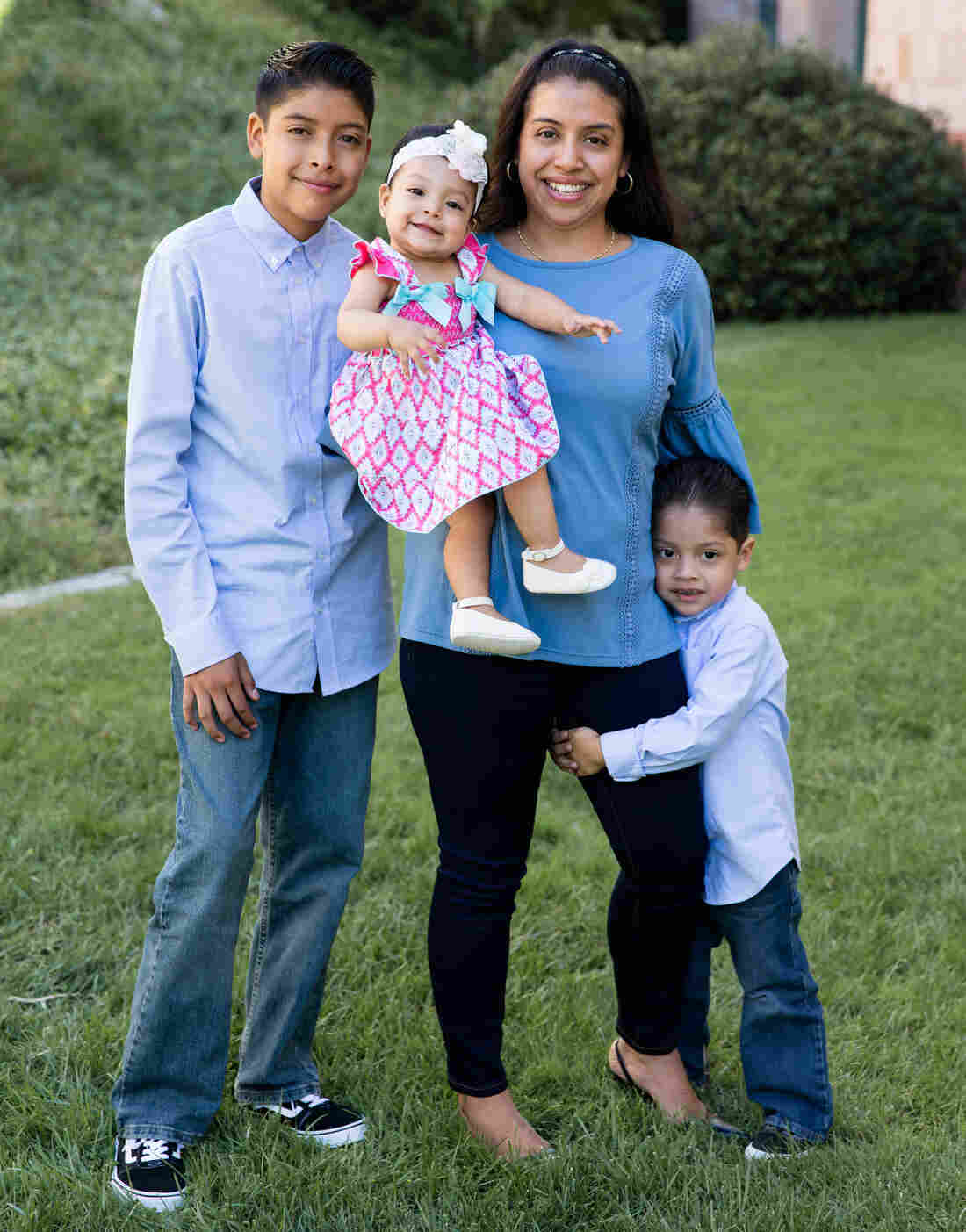 Sebastiana Manuel (second from left) and members of her family (from left) Domingo Manuel, Jr., Dolores Sebastian and Tony Manuel.

KCNQ2 variants are the most common genetic factor in epilepsy, causing about a third of all gene-linked cases and about 5 percent of all epilepsies. Sebastiana’s case could have been diagnosed with a less expensive test. For example, Invitae scientist Dr. Ed Esplin says his company offers a genetic screen for epilepsy that costs $1,500 with a two-week turnaround, or at a higher price for an urgent job.

Rady’s whole-genome test costs $10,000, Kingsmore says. But it casts a wider net, so it might provide useful information if a baby’s seizures are caused by something other than epilepsy.

And Kingsmore says his test costs about as much as a single day in the NICU. “In some babies we avoid them being in the intensive care unit literally for months,” he says.

Kingsmore and colleagues have published some evidence that their approach is cost-effective, based on an analysis of 42 cases.

Even so, most insurance companies and state Medicaid programs are still balking at the cost. Kingsmore says private donors are helping support this effort at Rady, which sequences about 10% of the babies in the NICU, and at more than a dozen others scattered from Honolulu to Miami. They send their samples to Rady for analysis.

Kingsmore is pushing to expand his network in the next few years, to reach 10,000 babies at several hundred children’s hospitals.

Other providers are also starting to offer whole-genome sequencing. But Dr. Isaac Kohane, chair of the department of biomedical informatics at Harvard Medical School, worries that the technology is too unreliable.

Knowledge of genes and disease is evolving rapidly, so these analyses run the risk of either missing a diagnosis or making a mistaken one. Kohane says there’s still a lot of dubious information there – a typical person has 10 to 40 gene variants that the textbooks incorrectly identify as causing disease.

He’s part of a medical network that helps diagnose people with baffling diseases. A study from 2018 found “a third of the patients who actually come to us already had full genome sequences and interpretations,” Kohane says. “They were just not correct.”

Even so, Kohane sees this use in the NICU as a relatively fruitful use of gene sequencing. “This is one of the few areas where I think the Human Genome Project is really beginning to pay off in health care,” he says, “but buyer beware, it’s not something ready to be practiced in every hospital.” (He supports the work at Rady – in fact, he’s a science adviser).

Kingsmore is already looking ahead. “We want to solve the next bottleneck, which is, ‘I don’t have a great treatment for this baby,’ ” he says. That’s a far greater challenge, and it’s especially difficult for a mutation that has altered a baby’s development in the womb. Those problems may often not be reversible.

Kingsmore is undeterred. “It’s going to be an incredibly exciting time in pediatrics,” he says.

You can contact NPR Science Correspondent Richard Harris at rharris@npr.org.