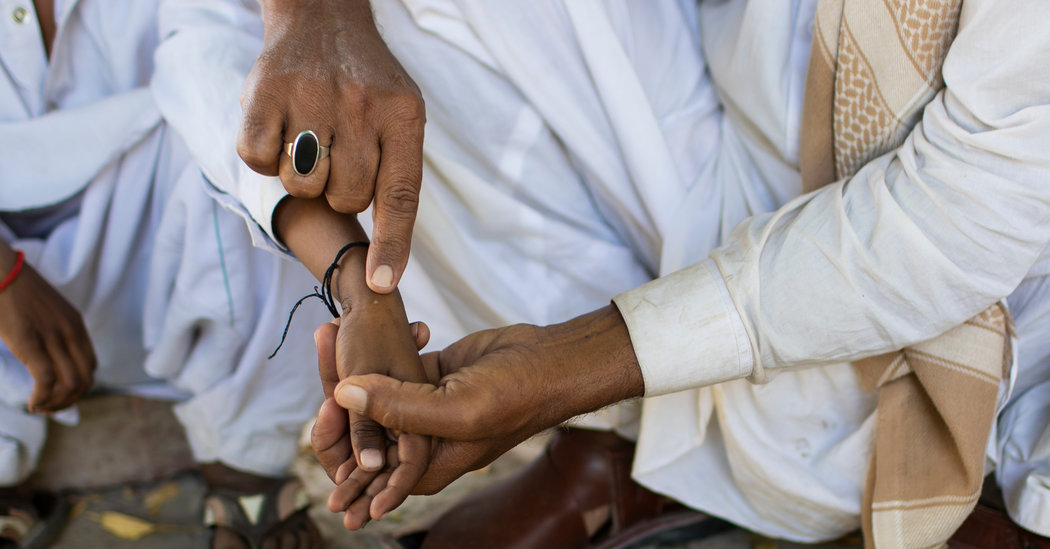 A pediatrician accused of reusing syringes and infecting scores of Pakistani children with H.I.V. is now practicing in a government-run hospital after his private clinic was shuttered, in a case that is raising widespread questions about the integrity of Pakistan’s health care system.

The pediatrician, Muzaffar Ghanghro, was initially the sole focus of blame in an H.I.V. outbreak that has hit more than 1,100 people — so far nearly 900 of them are children — in the small city of Ratodero.

But government officials believe he is not the only cause there, and that the bad practices he is accused of, including reusing syringes and IV needles, are so widespread across Pakistan that the entire health care system needs better regulation.

Health workers say the government needs to revamp the national medical syllabus to prioritize infection control, currently a minor part of doctor training. And they say hospitals often scrimp on the sterilization process for tools.

“The only good thing about the outbreak has been that it laid bare the multiple flaws in the system that the government with support of U.N. agencies needs to address,” said Dr. Fatima Mir, a pediatric infectious disease expert working at the Aga Khan University in Karachi. She was one of the first responders to help with the outbreak in Ratodero.

She said that Pakistan’s medical practitioners often lack the logistics and supplies necessary to prevent and contain infections. When she was in Ratodero to help, Dr. Fatima said it was a challenge finding clean water to wash her hands with while seeing patients.

“With the lack of infection control, this outbreak is not unexpected. What is unexpected is that this time, children are the main victims, and there are a lot of them,” she said.

Of the nearly 36,000 residents in Ratodero tested since late April, 1,112 of them have tested positive for H.I.V., 889 of them young children. With not even a quarter of Ratodero’s population tested, officials worry the real numbers are much higher.

Dr. Ghanghro has denied that he reused syringes, which is illegal.

“A team of medical experts came and interviewed him,” Mr. Baloch said. “The medical board determined that he did not intentionally spread H.I.V., but his clinic was in such a condition that the protocols were not being maintained.”

Dr. Ghanghro still faces criminal charges, making it unclear how he is able to continue practicing, and why he was recently posted to a government-run hospital near Ratodero.

Provincial health care officials in Sindh Province, who would be responsible for reassigning Dr. Ghanghro, said that he has not been given the permission to resume practicing medicine and that his medical license was not recently renewed.

But Dr. Ghanghro said in an interview with The New York Times last week that he recently renewed his license, and was practicing in a government hospital with a stream of patients waiting to be seen by him, questioning the government’s ability to regulate the system.

“He has applied to us to start practicing again,” said Abdul Sami, an official from the Sindh provincial health care commission. “But so far, we have not allowed it.

“If he has already started practicing, it is not to our knowledge,” added Mr. Sami, who is based in the district of Larkana, where Ratodero is.

Officials from the governing Tehreek-e-Insaf party blamed the outbreak on the poor governance and corruption of the local government of Sindh Province.

Other observers said the outbreak is more about systemic failure.

Zaigham Khan, a development expert who writes a column for The News newspaper, noted that Pakistan spends less than one percent of its G.D.P. on health care, and that only one doctor is available for every 6,000 people, mostly concentrated in urban areas.

“Pakistan is one of the two countries in the world where polio persists, the other being Afghanistan” and treatable conditions like rabies and dengue contribute to dozens of deaths annually, he added. “In rural areas, most people are treated by quack doctors. As if that was not enough, even doctors often administer expired medicine. Doctors are hardly ever made accountable for these practices in the legal system.”

Dr. Baseer Khan Achakzai, the program manager of the central government-run National AIDS Control Program, said that Ratodero’s conditions were not unique, and that much of Pakistan was struggling to combat the spread of H.I.V., which causes AIDS. Unregulated clinics were continuing to operate, he said, and used syringes are frequently repackaged to sell as new, although they are supposed to be incinerated after use.

From 2010 to 2018, the number of H.I.V.-positive people in Pakistan nearly doubled, to about 160,000, according to estimates by U.N.AIDS, the United Nations task force that specializes in H.I.V. and AIDS. During that time, the number of new infections jumped 38 percent in those 15 to 24. And only about 10 percent of people thought to be H.I.V.-positive are being treated.

“With the help of U.N. agencies, a state of the art AIDS control center is being established,” Dr. Achakzai said. “It will ensure that contaminated syringes will not be used and all medical waste would be put in the incinerator.”

With the exception of the capital, Islamabad, medical laboratories across Pakistan are not under any regulatory framework, Dr. Achakzai said.

“There is no check and balance,” he said.