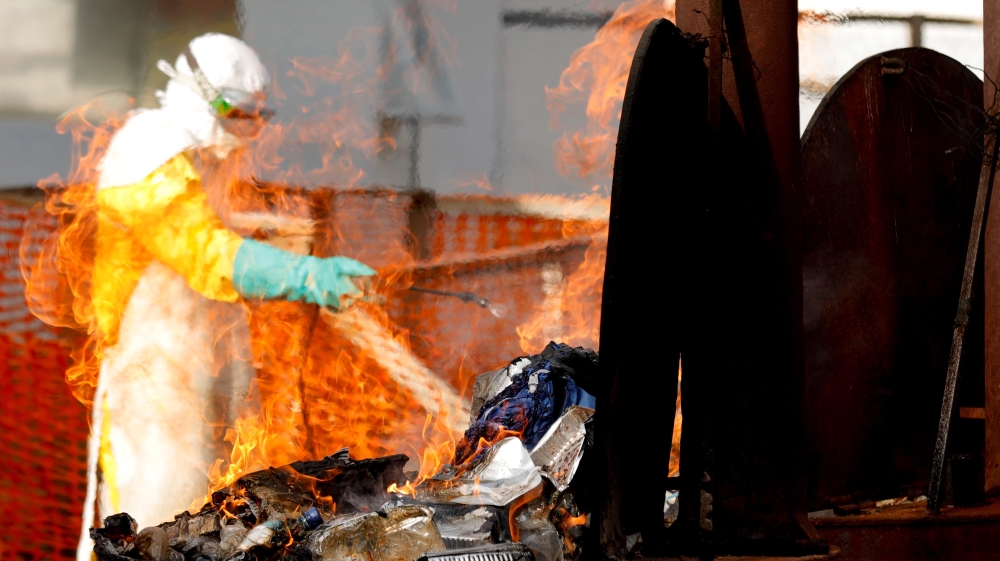 A rebel group has killed at least three people in an attack on an Ebola treatment centre in restive eastern Democratic Republic of the Congo (DRC), officials said, hours after more than a dozen villagers were killed in a separate attack in neighbouring North Kivu province.

“We condemn the attack against our team in Biakato by the local armed militias called Mai Mai. We have two deaths from our team. Several have been seriously wounded. We also have some missing.” Mustapha Hans Bateyi said.

The fighters, who burned vehicles and buildings during the attack, have also killed another Ebola worker from the town, security sources told Al Jazeera.

Biakato is on the border with North Kivu province, a region that has witnessed renewed violence in recent days.

The WHO and United Nations Children’s Fund (UNICEF) said Tuesday they had evacuated dozens of their staff working on the Ebola epidemic from Beni due to the worsening security situation.

The WHO said 49 of its non-essential staff were flown to the eastern city of Goma, leaving 71, while UNICEF temporarily relocated 27 staff, leaving 12 in Beni.

More than 3,100 Ebola cases have been confirmed since an outbreak was declared in August 2018 and more than 2,100 deaths recorded.

But insecurity in the region is hampering efforts to contain the outbreak.

At least 81 civilians have been killed since November 5 in Beni, according to figures provided by Kivu Security, a joint project of the Congo Study Group and Human Rights Watch.

Angry residents have been taking to the streets this week in several towns in North Kivu following attacks by fighters from the Allied Democratic Forces (ADF). Protesters blocked roads and burned down government and UN buildings in response to the attacks.

Residents are outraged that rebels continue to carry out deadly attacks despite the presence of UN peacekeepers and DRC security forces in the region. Some have called for the UN peacekeeping mission in the country (MONUSCO) to take action to prevent such atrocities or leave the region.

The DRC’s military initiated its latest campaign in October to root out fighters operating in the region, which has been racked by decades of instability.