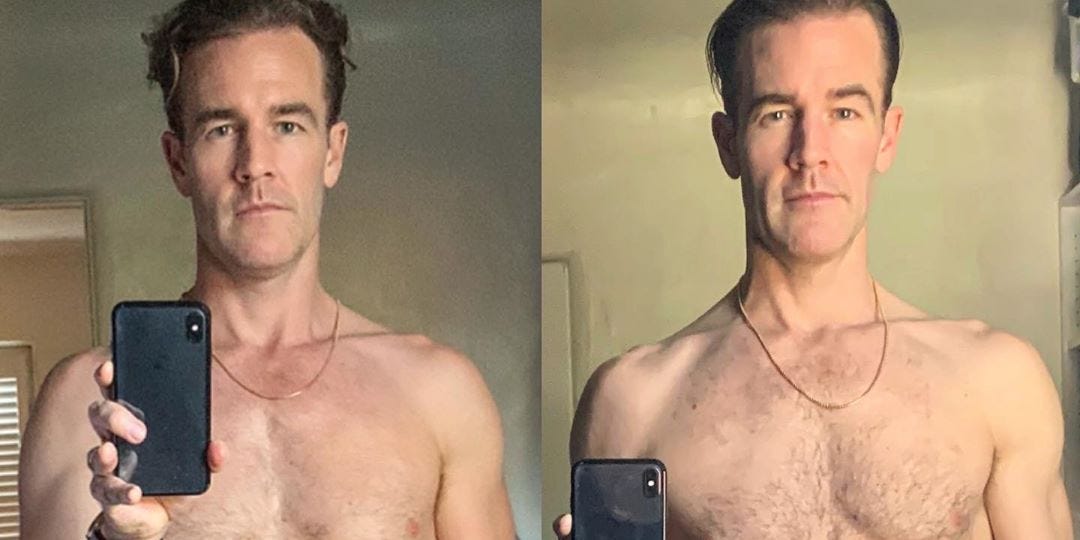 James Van Der Beek shared a before-and-after image on Wednesday showing just how much dancing has changed his body.

The actor, 42, had been competing on “Dancing With the Stars,” but he left the show two weeks ago, finishing in fifth place.

And the change to his workout routine clearly affected his physique.

Van Der Beek explained in the Instagram caption that previously, his exercise regime consisted of the martial art Muay Thai three days a week, and he’d been doing that for half a year when he took the first selfie.

But then he spent a few months dancing for six hours a day, and the father of five has leaned out considerably as a result.

“I’d been training in Muay Thai three days a week for about six months (for the next project I’m writing) when I hit pause to dance six hours a day. Now I can rhumba.”

While dancing is undoubtedly an excellent way to work out the whole body, it’s not the activity in particular that will have resulted in Van Der Beek’s weight loss, but rather the fact that his energy expenditure will have increased dramatically, thus creating a calorie deficit.

In response to a fan’s comment, the “Dawson’s Creek” star also explained how he changed his diet to fuel his dancing.

“I danced early in the day so pretty much ate vegan until dinner,” he said. “Had to keep it light fare because we didn’t really take breaks.

“Not so much a diet … more like only wanting to eat what I knew would make me feel good under the workload.”

“Dance will work muscles you never knew you had, and you’ll be so surprised that even something which looks relatively simple can take a deceptive amount of strength, and control, which everyone can build up over time,” Bonnie Lister Parsons, Founder & CEO of Seen on Screen Dance in London told Insider.

“It’s a full body workout that not only strengthens muscles and vastly reduces body fat, but it’s also an addictive workout for the mind, which is about owning who are and tuning out the stresses of the day so you can simply focus on you and your amazing dance routine!

James Van Der Beek revealed that his wife had a miscarriage