The death toll in Samoa’s measles epidemic has risen to 48, with another four people dying this weekend.

Outside the main hospital in Apia.
Photo: RNZ / Logan Church

Most of the dead are children under four years old, and the number of infections in that age group is still on the rise. More than 1700 children less than four years old are infected with the disease.

At Lalomanu District Hospital nurse Selwyn Amataga said many parents who had been initially apprehensive about vaccinating their children are now coming forward to ensure they get the jab. 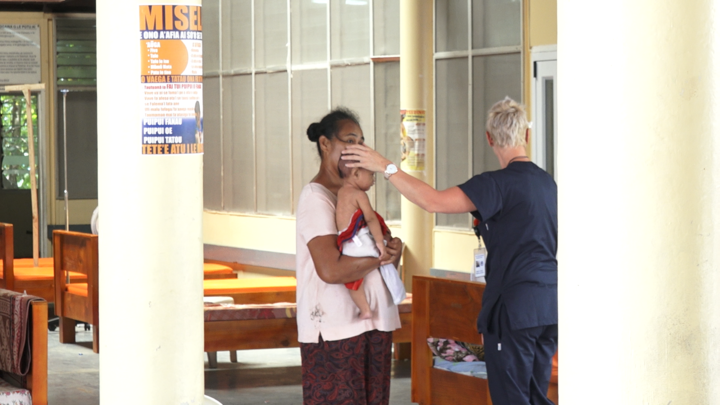 A baby who has measles at a clinic run by New Zealand doctors.
Photo: RNZ / Logan Church

Limited vaccine numbers meant they had to prioritise children, but he said the authorities are quick at supplying more when needed.

And he was relieved 100,000 more vaccines from New Zealand will be arriving soon, but he’s worried about the growing number of infections.

There are nearly 200 people with measles who are in-patients at health facilities, and the admissions include 21 critically ill children and two pregnant women.

“We are still not satisfied with the coverage of the six months to the four years. We still haven’t crossed 40 percent of that age group,” he said.