Something was clearly missing at church services in Samoa this weekend – children.

Congregations at church services such as this one in Mulivai in Samoa are praying for those hit hard by measles.
Photo: RNZ / Logan Church

Father Losi Antonio, of Mulivai Catholic Church in the south of Samoa, said at the start of the service the congregation prayed for those who had lost loved ones to measles as well as those fighting the disease.

Forty-eight people so far have died since the outbreak began – most of them children.

Strict government rules required children to stay at home from Mass, which is a big part of most Samoan’s week.

“I asked the parish here to please make the children stay home,” he said.

This weekend also marked the start of Advent – the lead-up to Christmas celebrations.

But Father Antonio said that traditional Christmas gatherings have also been cancelled.

“We are heading towards Christmas, a time of happiness, a time of love, a time of joy, but these families are suffering,” he said.

The chair of the Auckland-based Pacific Leadership Forum, Teleiai Edwin Puni, said some had cancelled their flights to Samoa over Christmas.

“Even if they go there’s not much celebration that was planned, but those who are in New Zealand it will be the same feeling. It’s going to be a very mellow christmas for Samoans.

“The biggest concern here, all the frustration, is not knowing when it’s gonna stop.”

Mr Puni said many other Samoans in Auckland still planned to travel to Samoa for Christmas.

Meanwhile, patients are still coming into district hospitals around the country.

One is Lalomanu District Hospital, an hour and a half from Apia.

Registered nurse Selwyn Amataga is in charge of the small hospital which sits on a hill overlooking the village.

Most of the patients he’s seen have recovered, although seven were rushed to Apia hospital.

But he says one of their challenges is managing vaccine supplies.

“We’re not out of vaccines right now but we have 60 and we are planning to visit six more villages that we haven’t covered yet,” he said.

He said the authorities were getting more vaccines out quickly when needed, but he is concerned infection rates are still rising.

More than 3500 people now have measles in Samoa, – providing a challenge to already exhausted medical staff.

Samoa’s authorities are trying to make up for lost time with the mass vaccination campaign reporting that almost a third of the country has been immunised in the last 12 days.

Forty-eight people have died from measles so far, with more deaths expected to be reported today.

The Health Ministry has gone into overdrive, investing millions of dollars and sending out 32 mobile vaccination units across the two main islands as more and more vaccines are shipped in from overseas. 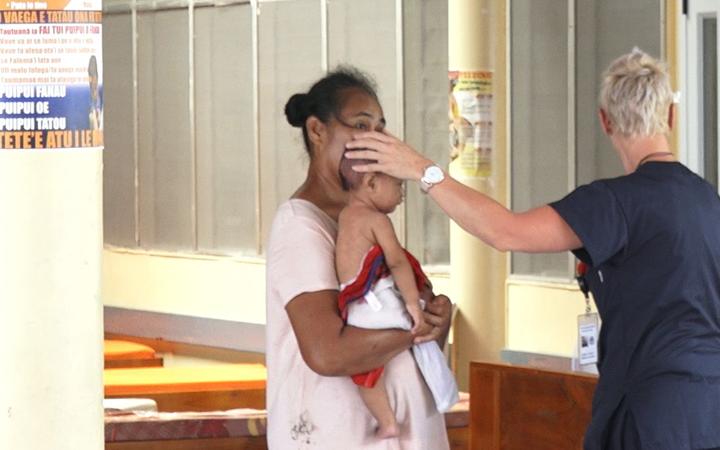 A baby with measles is treated at a clinic run by New zealand medical staff.
Photo: RNZ / Logan Church

One hundred thousand doses are due this week from New Zealand.

But authorities say infections are rising daily and the deadly disease is still spreading.

The government has just expanded the ages of those eligible for measles vaccinations.

Previously, the vaccines were being prioritised for everyone between 6 months and 19, and non-pregnant women up to 35 years old.

New Zealand and Australian medical teams have been helping for weeks, and the latest foreign staff to arrive are from Britain and French Polynesia.

A French team is also expected.