The three people, who do not live in Los Angeles, were in the airport December 11 between 6:50 a.m. and noon in Terminals 4 and 5, the department said.
Anyone who may have been at the those terminals on December 11 are at risk of developing measles for up to 21 days after being exposed. The department urged people to monitor themselves for illness or unexplained rash from seven to 21 days after their exposure, and to call a health care provider immediately if symptoms develop. 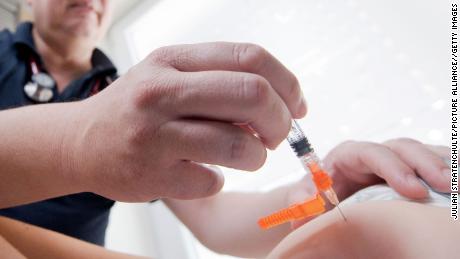 “Public Health urges residents, especially those who travel internationally and those who have not been fully protected against measles, to get the measles immunization in order to better protect their individual health and to prevent the spread of measles to others,” the department said.
The measles virus is highly contagious but can be prevented with vaccinations. Up to 90% of people near an infected person who are not vaccinated will become infected, according to the Centers for Disease Control and Prevention.
The disease can be spread through coughing or sneezing and can linger in the air for as long as two hours.
There have been 20 measles cases among Los Angeles County residents in 2019, in addition to 14 non-resident measles cases that traveled through Los Angeles County, the healthy department said.
The majority of cases to date were in unimmunized people or those who did not know whether they had ever been immunized.
The Los Angeles Department of Public Health warned in October about a person infected with measles who had visited Disneyland, potentially exposing hundreds of people to the disease.
Also in October, Pennsylvania health officials warned about possible measles exposure at Philadelphia International Airport, saying an individual suspected of having the virus was at the airport over two days and may have exposed others.