Three weeks after Chinese officials announced the outbreak of a new virus, more than 400 people have been sickened and 17 have died, leading to questions of just how alarmed the public should be.

The coronavirus, or 2019-nCoV, began at an animal and seafood market in the city of Wuhan and has since spread to several other countries, including the United States. The illness is now said to be transferable between humans.

As news of the virus spread and death tolls began to spike, many have begun to question how dangerous the new outbreak is. Coronaviruses, which get their name from their crown-like appearance, come in many types that cause illnesses in people and animals.

A health official scans the body temperature of a passenger as she arrives at the Soekarno-Hatta International Airport in Tangerang, Indonesia on Wednesday. Indonesia is screening travelers from overseas for a new type of coronavirus as fears spread about a mysterious infectious disease after its first death reported in China. (AP Photo/Tatan Syuflana)

In an effort to curb the spread of the disease, the city of Wuhan shut down all air and train traffic to contain it. The World Health Organization (WHO) on Wednesday convened an emergency meeting to debate how to address the outbreak, including the possiblity of declaring a public health emergency.

“The decision about whether or not to declare a public health emergency of international concern is one I take extremely seriously, and one I am only prepared to make with appropriate consideration of all the evidence,” WHO director-general Tedros Adhanom Ghebreyesus tweeted.

Ghebreyesus said the committee needed another day to discuss the issue and come to a decision.

The CDC said it was monitoring the situation and, for now, “the immediate health risk from 2019-nCoV to the general American public is considered low at this time.”

The patients infected in China experienced mild symptoms and have been discharged from hospitals, the CDC said. Investigations to learn more about the coronavirus is ongoing, the agency said.

“Investigations into this novel coronavirus are ongoing and we are monitoring and responding to this evolving situation,” said Martin Cetron, director of the CDC’s Division of Global Migration and Quarantine.

The first case reported in the U.S. came on Tuesday, when federal health officials said a man in Seattle, Wash., who recently traveled to Wuhan had been infected. He is in stable condition and poses “very little risk” to medical staff and the public, officials said.

Human coronaviruses are passed through coughing and sneezing, close personal contact, touching objects with the virus on it and then touching the mouth, nose or eyes before washing your hands, according to the CDC. 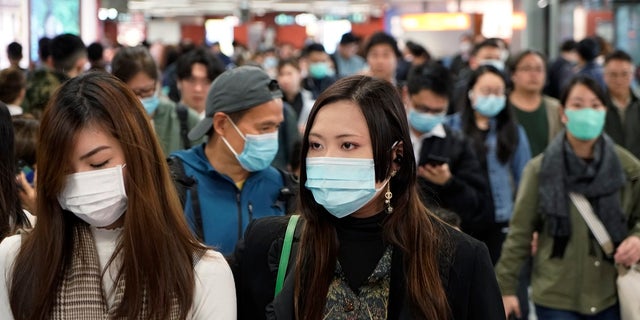 Passengers wear masks to prevent an outbreak of a new coronavirus in a subway station, in Hong Kong. The first case of coronavirus in Macao was confirmed on Wednesday, according to state broadcaster CCTV. The infected person, a 52-year-old woman, was a traveller from Wuhan. (AP Photo/Kin Cheung)

The CDC and Customs and Border Protection (CBP) began screening passengers to detect ill travelers arriving at airports in San Francisco, New York and Los Angeles on direct or connecting flights from Wuhan.

Sen. Tom Cotton has raised concerns about a Chinese cover-up of the virus as it spreads to various countries. In a letter to the Department of Health and Human Services Secretary Alex Azar, Cotton urged Azar to vet information from China, given its history of cover-ups during the SARS outbreak. At the time, China didn’t announce the disease to the public until five months after it began.

“If you have reason to believe that U.S. officials are being provided with false or misleading information about the disease from Chinese government officials, I ask you to notify Congress immediately,” Cotton said in a letter.

He noted that banning entry into the U.S. from those traveling from China could be a possibility. China has reportedly warned lower-level officials not to cover up the spread of the new coronavirus.

In potential ‘gamechanger,’ blood test may accurately predict Alzheimer’s – The Times of Israel

PARIS, France — Scientists said Monday that they had developed a way of predicting if pati…

PARIS, France — Scientists said Monday that they had developed a way of predicting …

“They literally did everything together and although we’re shocked about it, when we look …