Here’s what you need to know:

As China marked a somber Lunar New Year on Saturday, 15 more deaths from the new coronavirus were reported in Wuhan, the epicenter of the outbreak. Other countries, including Australia, said the virus had reached their shores.

The latest deaths, announced early Saturday by the health authorities in Hubei Province, whose capital is Wuhan, brought the toll in China to 41. Just three of those deaths have been outside Wuhan: one in another city in Hubei, one in Hebei Province, and one in Heilongjiang, near the Russian border.

The latest victims ranged in age from 55 to 87, the authorities said. Eleven were male, and four female.

Nationwide, more than 400 new cases of the virus were diagnosed, officials said early Saturday, bringing the total number of confirmed cases in China to nearly 1,300. Travel restrictions in Wuhan and 12 other cities have essentially penned in 35 million people on the country’s biggest holiday, normally a time for traveling to visit family.

All of the reported deaths from the outbreak have been in China, but travelers have spread the virus to numerous other countries. Cases have been confirmed in Australia, Malaysia, Nepal, Vietnam, Singapore, Japan, South Korea, Taiwan, Thailand, France and the United States.

People without symptoms could be spreading the virus, researchers say.

The medical journal The Lancet published a study on Friday suggesting that people infected with the coronavirus might be able to spread it even if they do not have flu symptoms.

Researchers studied a family of seven in the Chinese city of Shenzhen, five of whom had traveled to Wuhan, the center of the outbreak. Two of them came into contact with an infected relative in a hospital there. Testing conducted days later, after they flew home, found that six members of the family had the coronavirus, including one who had not gone to Wuhan.

One infected family member, a child, had no symptoms, suggesting that people with the virus might be spreading it without knowing that they have it, the study found.

“It shows this new coronavirus is able to transfer between person to person, in a hospital setting, a family home setting, and also in an inter-city setting,” Yuen Kwok-yung, an author of the study, said in an interview. “This is exactly what makes this new disease difficult to control.” Dr. Yuen characterized the disease as “asymptomatic walking pneumonia.”

The researchers cautioned that the study was limited to early cases of the virus, and that it was difficult to assess risk factors at this stage. But they stressed the importance of quarantining patients as early as possible, given the early signs of asymptomatic transmission.

Another study in The Lancet found that symptoms of early coronavirus cases showed similarities to SARS, the respiratory disease that killed nearly 800 people worldwide in an outbreak that began in China in 2002. Those symptoms included fever, dry cough and shortness of breath.

China is building a hospital to fight the outbreak. Projected completion time: 10 days.

A fleet of earth movers tore into the soil. Workers and trucks swarmed around the site.

Under pressure to show an emphatic response to the coronavirus outbreak, the Chinese authorities have begun building a hospital in Wuhan, the center of the outbreak. They hope to complete it in 10 days.

The Wuhan government on Friday said it was building the temporary Huoshenshan Hospital to treat patients with the previously unknown virus that has sickened hundreds in the city. The hospital will have space for 1,000 beds and is expected to be completed by Feb. 3, according to a local media report posted to the Wuhan government’s website.

The authorities met on Thursday evening to come up with a plan and a design for the makeshift hospital, which is modeled after a facility built by the government of Beijing in 2003 during the SARS outbreak.

The authorities dispatched 35 backhoes, 10 bulldozers and eight road rollers to a 270,000- square-foot plot in Wuhan’s Caidian district, the report said. The land sits on the northwestern bank of the Yangtze River, it said.

The Communist Party long ago realized that its authoritarian rule over China came with trade-offs. In times of disaster, for example, the government could quickly be blamed for causing the problem or responding slowly.

As some people online question the government’s response to the deadly outbreak, building a hospital in less than two weeks could serve as a symbol of Beijing’s commitment to address the outbreak head-on. 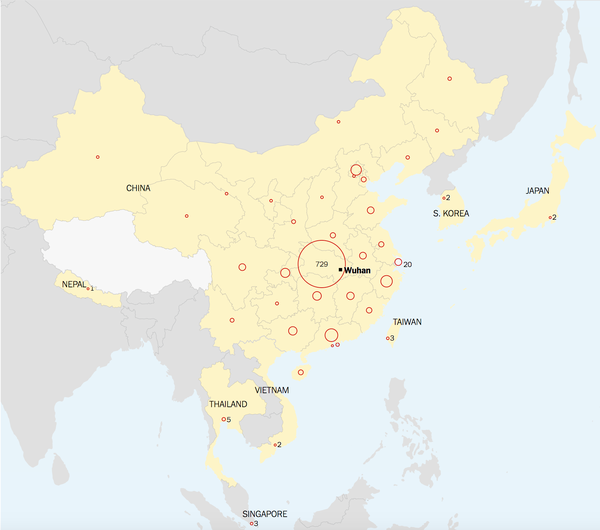 Tracking Where the Coronavirus Has Spread

The virus has sickened more than 1,000 people in China and a handful in other countries.

Chinese-Americans are scrambling to help.

For people in the United States with close ties to China, the outbreak has brought unexpected worry, disappointment and scrutiny. Some in the Chinese-American community have had their Lunar New Year holiday plans waylaid, as travel schedules for the coming week and beyond get interrupted.

Some are gearing up for the outbreak to get worse. Hardware stores and pharmacies around the United States are selling out of masks that could help prevent the spread of the disease. In the New York City neighborhood of Flushing, masks have been sold out for much of the week.

Chinese-Americans networking with their friends and family in China have scrambled to send aid. One woman in Los Angeles has amassed 20,000 masks to ship overseas.

Sean Shi, of Issaquah, Wash., said he shipped several boxes of masks to China in a friend’s luggage, with hopes that the masks could reach friends in the Wuhan area as soon as possible. Later in the day, Mr. Shi was back at a local hardware store, buying another 46 masks for some of his former peers at Wuhan University.

“We understand it’s a tough situation over there — the panic, the shortage of equipment,” Mr. Shi said. “We just realized the situation is very serious — more serious than we thought.”