Home Health News In the 1918 flu pandemic, not wearing a mask was illegal in some parts of America. What changed? – CNN

But in the West, mask adoption has been far slower, with England’s Chief Medical Officer Chris Whitty, for example, going so far as to claim mask-wearing is unnecessary.
Yet it hasn’t always been the case that mask-wearing is an Asian proclivity.
It certainly wasn’t during the influenza pandemic of 1918, which lasted from January 1918 to December 1920, and infected one-third of the world’s population, or about 500 million people, leading to about 50 million deaths — about half a million of which were in the United States.
There are many parallels between the two pandemics. 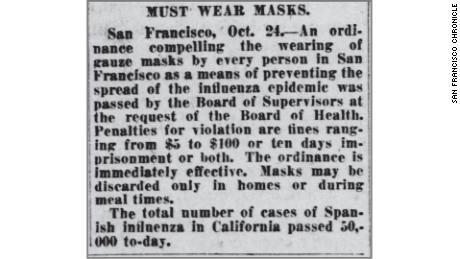 While origin theories about the 1918 virus still abound, it was assigned a country specific name: the Spanish Flu. Globalization facilitated its spread as soldiers fighting in World War I took the flu around the globe. Then as now, warehouses were repurposed into quarantine hospitals. And an ocean liner with infected patients became a talking point.
But one notable difference is that it was the United States which led the world in mask wearing.
In October 1918, as San Francisco received the pandemic’s second wave, hospitals began reporting a rise in the number of infected patients.
On October 24, 1918, the city’s elected legislative body, the board of Supervisors of San Francisco, realizing that drastic action needed to be taken with over 4,000 cases recorded, unanimously passed the Influenza Mask Ordinance.
The wearing of face masks in public became mandatory on US soil for the first time.

After San Francisco made masks mandatory in public, an awareness campaign began.
The city’s mayor, along with members of the Board of Health, endorsed a Red Cross publicity blitz which told the public: “Wear a Mask and Save Your Life! A Mask is 99% Proof Against Influenza.” Songs were written about mask wearing, including one ditty that featured the lyrics: “Obey the laws, and wear the gauze. Protect your jaws from septic paws.” 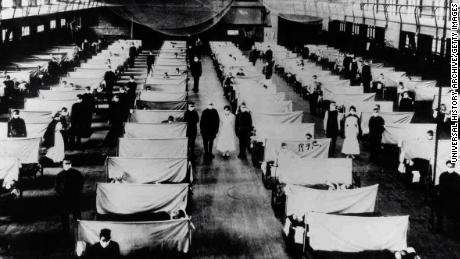 Anyone found outdoors without a mask could be fined or even imprisoned.
The campaign worked and other Californian cities followed suit, including Santa Cruz and Los Angeles, followed by states across the US.
And it wasn’t just America.
On the other side of the Atlantic similar steps were being taken — the Committee of the Academie de Médicine of Paris recommended the wearing of face masks in the French captial in early November 1918. So did Dr. Niven, the Medical Officer of Health for Manchester, in northern England.
In a case of history repeating itself, this week the mayor of Los Angeles asked people to wear masks when out in public shopping.
As mask use gained pace across Europe and North America the issue of supply became acute.
There were only a small number of specialist mask manufacturers, such as the Prophylacto Manufacturing Company of Chicago, and they could not meet the surge in demand.
Home production was the answer. In parts of America, churches, community groups, and Red Cross chapters came together, acquiring as much gauze as they could find, and held mass mask-making sessions. 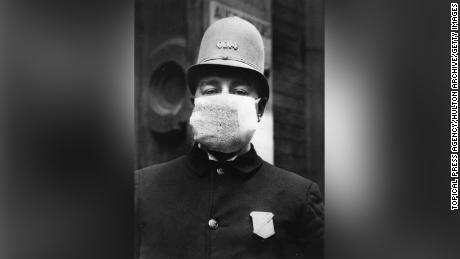 Newspapers, and various state governments in the US, linked masks to the ongoing war on the battlefields of Europe in October 1918 — “Gas Masks in the Trenches; Influenza Masks at Home” promised the Washington Times newspaper on September 26, 1918, reporting that 45,000 masks would be provided to US soldiers to ward off “the Spanish Flu.”
When the First World War ended on November 11, gas-mask manufacturers fulfilling government contracts switched to influenza masks.

Mask-wearing laws largely had public support and were mostly policed by consent.
Tucson, Arizona, issued a face mask ordinance on November 14, 1918, with exemptions for preachers, singers and actors in theatres and schoolteachers — all thought to be far enough away from their audiences. Soon after, Police Chief Bailey told the Tucson Citizen not that he was threatening arrest to miscreants but rather that, in his opinion: “No gatherings will be considered fashionable unless the attendees are attired in masks.” 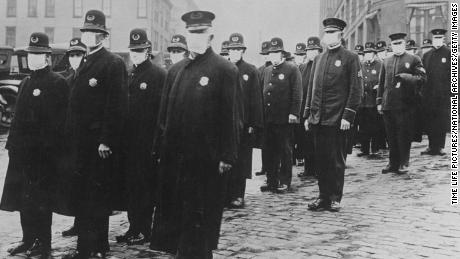 Back on the West Coast, San Francisco was still ahead of the curve when it came to promoting face mask use. On October 25, 1918, the San Francisco Chronicle ran front page pictures of the city’s top judges and leading politicians all wearing face masks.
Soon there was no escaping wearing a mask. All trains arriving at west coast stations were to be met by mask encouragement committees, groups of female volunteers with masks for those who had not managed to procure one out of state.
Of course, there were some who flouted the rules. At a boxing match in California, a photograph taken with a flashlight showed that 50% of the men in the audience weren’t wearing masks. Police enlarged the picture and used it to identify the mask-less.
Each man was warned to make a “voluntary contribution” to a charity for the men fighting overseas, or face prosecution.

During the 1918 flu pandemic, scientific research around mask use was still largely anecdotal — and the compelling story of one ocean liner caught people’s attention.
In early December 1918, the Times newspaper in London reported that it had been established, by doctors in the United States, that the influenza was “contact-borne and consequently preventable.”
The Times noted that in one London hospital all staff and patients had been issued with, and instructed to constantly wear, face masks. The newspaper cited the successes of face masks on one ship.
The ocean liner sailing between the United States and England had suffered a terrible infection rate coming from New York, the Times reported. When returning to the United States, the captain instituted a face-mask order for crew and passengers, after having read about their use in San Francisco. 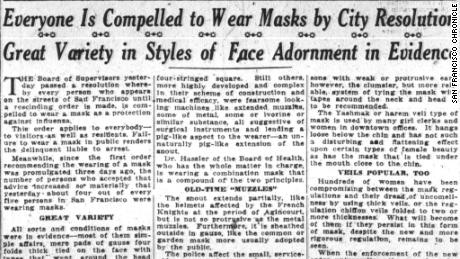 No infections were reported on the return trip, despite high infection rates at the time in both Manhattan and Southampton, from where the ship departed. It was impossible to know if the rules on masks on the return voyage were responsible for the lack of infections, but that was how the press interpreted it.
There was some precedent behind the mask guidance.
During the Great Manchurian Plague of 1910-1911, which saw Chinese, Russian, Mongolian and Japanese scientists come together to combat a widespread outbreak of bubonic plague in northern China, face masks had been deemed effective.
Science journalist Laura Spinney, author of the 2017 book The Pale Rider: The Spanish Flu of 1918 and How it Changed the World, notes that after their experiences in Manchuria in 1911, the Japanese took swiftly to wearing masks in public in 1918.
The Japanese authorities argued that masks were a courteous gesture in protecting others from germs and had been effective in previous, more localized, outbreaks of disease in Japan.
And mask wearing did seem to have a flattening effect on infection rates.
By late December, cities and states in America were feeling confident enough to lift the mask wearing ordinances, as new infections dwindled to single figures in most places.
“Today is the last time for the little gauze face pest,” announced a Chicago newspaper on December 10, 1918. 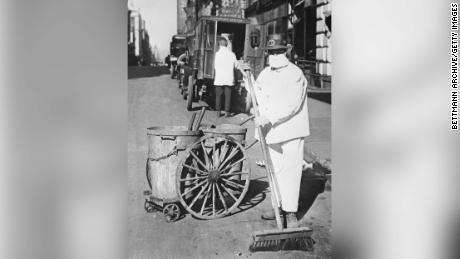 In 1918, America adopted mask wearing with a vengeance.
But a century later, it is Asian countries which have remembered the lessons the US learned about the benefits of mask wearing in slowing the spread of infection.
Perhaps that is because in the intervening years Asia has dealt with ongoing outbreaks of cholera, typhoid and other transmittable diseases, right up to SARS in 2003 and avian flu more recently.
Those outbreaks have helped to maintain a mask-wearing culture.
America and Europe have not seen similar outbreaks with such regularity.
So, it seems, the notion of masks as a prophylactic measure has skipped the consciousness of several generations. The coronavirus might be about to change that.

A panel of U.S. advisers will meet Tuesday to vote on how the COVID-19 …