Moderna launches late-stage coronavirus vaccine trial to test its shot in 30,000 people – and says it could know if it works by year-end

By Associated Press and Natalie Rahhal Acting Us Health Editor

The world’s biggest COVID-19 vaccine study got underway Monday with the first of 30,000 planned volunteers helping to test shots created by the US government — one of several candidates in the final stretch of the global vaccine race.

There’s still no guarantee that the experimental vaccine, developed by the National Institutes of Health and Moderna, will really protect.

The needed proof: Volunteers won’t know if they´re getting the real shot or a dummy version. After two doses, scientists will closely track which group experiences more infections as they go about their daily routines, especially in areas where the virus still is spreading unchecked.

‘Unfortunately for the United States of America, we have plenty of infections right now’ to get that answer, NIH´s Dr Anthony Fauci recently told The Associated Press.

Moderna said the vaccination was done in Savannah, Georgia, the first site to get underway among more than seven dozen trial sites scattered around the country.

Co-founder and Chairman Noubar Afeyan said that, depending on how many cases develop within the study group, Moderna and the NIH may know as early as ‘late this year or early next year’ if the shot is helping to prevent or reduce the severity of infections during a Monday Good Morning America interview. 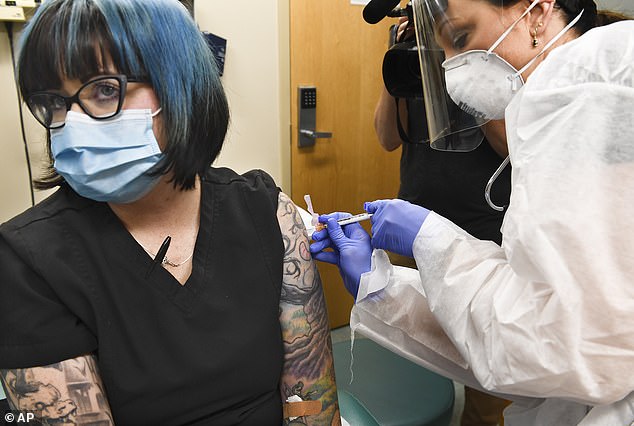 Melissa Hartin, of Harpersville, New York, got her blood drawn before becoming one of the first people dosed in a phase 3 trial for Moderna’s coronavirus vaccine on Monday. The trial aims to recruit 30,000 volunteers and test whether the shot can prevent coronavirus infection (AP/Hans Pennink) 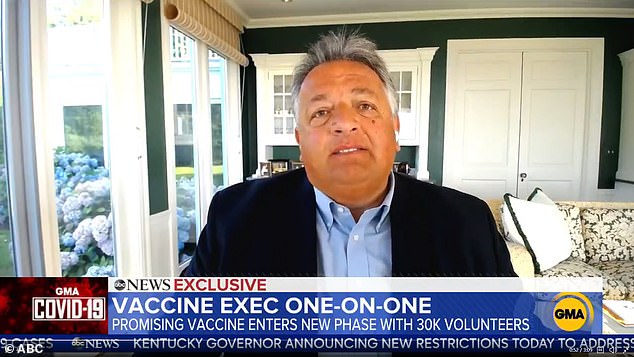 Speaking on Good Morning America, Moderna co-founder and chairman, Noubar Afeyan, said his company could have data on whether people who got the vaccine were less likely to develop COVID-19 as early as ‘late this year or early next year’

When asked by George Stephanopoulos if the shot would prevent infection, or simply reduce severity, Afeyan said that’s something his company and the NIH aim to find out from the large late-stage trial.

‘We have a certain number of cases that we need to see before we can demonstrate whether vaccine arm gives us more protection than folks that are not on the vaccine arm,’ Afeyan said.

The trial will hopefully reveal whether the vaccine bolsters the immune system such that a person ‘gets a little of the infection then [the body] shuts it down…as we do with the flu, or whether it’s going to be completely eliminated so we get very little infection once vaccinated,’ he added.

Unlike Pfizer and AstraZeneca, Moderna does not yet have a contract with the US government, which plans to purchase hundreds of millions of doses of the vaccines being developed by the two companies.

Moderna has not promised to sell its shot – to the government or otherwise – at a non-profit cost.

‘The pandemic is not a time when we intend to use the price to do anything but increase supplies to reach potentially up to a billion people next year,’ Afeyan said, adding that it will be up to governments to decide who gets the shot first.

Several other vaccines made by China and by Britain´s Oxford University earlier this month began smaller final-stage tests in Brazil and other hard-hit countries.

But the US requires its own tests of any vaccine that might be used in the country and has set a high bar: Every month through fall, the government-funded COVID-19 Prevention Network will roll out a new study of a leading candidate — each one with 30,000 newly recruited volunteers.

The massive studies aren’t just to test if the shots work – they’re needed to check each potential vaccine’s safety. And following the same study rules will let scientists eventually compare all the shots.

Next up in August, the final study of the Oxford shot begins, followed by plans to test a candidate from Johnson & Johnson in September and Novavax in October — if all goes according to schedule. Pfizer Inc. plans its own 30,000-person study this summer.

That´s a stunning number of people needed to roll up their sleeves for science. But in recent weeks, more than 150,000 Americans filled out an online registry signaling interest, said Dr Larry Corey, a virologist with the Fred Hutchinson Cancer Research Institute in Seattle, who helps oversee the study sites. 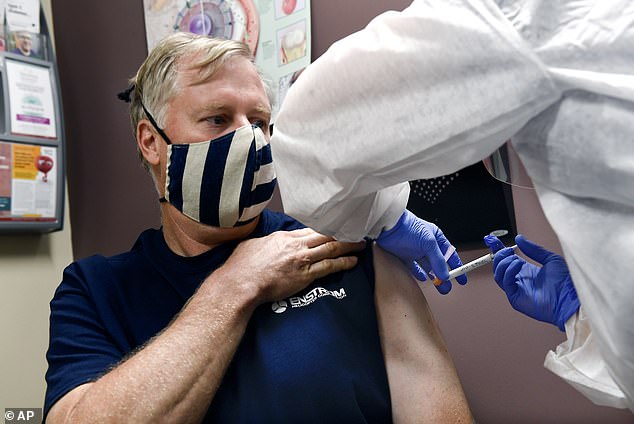 Wade Bardo, a volunteer fireman from Erin, New York, was injected on Monday with either Moderna’s coronavirus vaccine or a placebo  as one of 30,000 volunteers in the final-stage efficacy trial  (AP Photo/Hans Pennink)

It normally takes years to create a new vaccine from scratch, but scientists are setting speed records this time around, spurred by knowledge that vaccination is the world’s best hope against the pandemic. The coronavirus wasn’t even known to exist before late December, and vaccine makers sprang into action Jan. 10 when China shared the virus’ genetic sequence.

Just 65 days later in March, the NIH-made vaccine was tested in people. The first recipient is encouraging others to volunteer now.

‘We all feel so helpless right now. There’s very little that we can do to combat this virus. And being able to participate in this trial has given me a sense of, that I´m doing something,’ Jennifer Haller of Seattle told the AP.

‘Be prepared for a lot of questions from your friends and family about how it’s going, and a lot of thank-you’s.’

That first-stage study that included Haller and 44 others showed the shots revved up volunteers´ immune systems in ways scientists expect will be protective, with some minor side effects such as a brief fever, chills and pain at the injection site.

Early testing of other leading candidates have had similarly encouraging results.

If everything goes right with the final studies, it still will take months for the first data to trickle in from the Moderna test, followed by the Oxford one.

Governments around the world are trying to stockpile millions of doses of those leading candidates so if and when regulators approve one or more vaccines, immunizations can begin immediately. But the first available doses will be rationed, presumably reserved for people at highest risk from the virus.

‘We’re optimistic, cautiously optimistic’ that the vaccine will work and that ‘toward the end of the year’ there will be data to prove it, Dr Stephen Hoge, president of Massachusetts-based Moderna, told a House subcommittee last week.

Until then, Haller, the volunteer vaccinated back in March, wears a mask in public and takes the same distancing precautions advised for everyone – while hoping that one of the shots in the pipeline pans out.

‘I don’t know what the chances are that this is the exact right vaccine. But thank goodness that there are so many others out there battling this right now,’ she said.