October 17, 2021
Trending
Home Health News How you handle this Labor Day will help steer the course of the Covid-19 pandemic, doctors say – CNN

1. Be responsible. Keep gatherings small, have them outside, wear a face mask when you’re not eating or drinking, and stay 6 feet away from anyone outside your household whenever you have your mask off.
2. Ignore all those guidelines and repeat the same mistakes made during Memorial Day and the Fourth of July, which led to surges in new Covid-19 cases, hospitalizations and deaths and set the economy back even further.
But this holiday, the stakes are even higher. 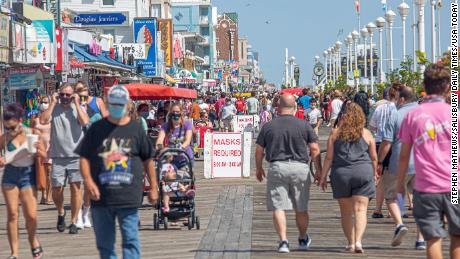 “We go into Labor Day with 40,000 new cases a day — much higher than we were at Memorial Day,” said Dr. Ashish Jha, director of the Harvard Global Health Institute.
“So I’m worried that any new surges will be potentially quite catastrophic.”

Why Labor Day behavior is even more critical

Unlike on Memorial Day and Independence Day, Americans now face two major challenges that could either be hurt or helped by their behavior this holiday:
— Getting students back in school safely and making sure they’re able to stay in school. Both depend on how much coronavirus is spreading in the community.
Already, some schools have temporarily shut down after Covid-19 outbreaks.
— The imminent flu season. The coronavirus pandemic coinciding with the flu season this fall could strain or max out hospital capacity — which could mean reduced care for anyone else who needs to go the hospital.
An estimated 410,000 to 740,000 Americans were hospitalized with the flu last flu season, according to the Centers for Disease Control and Prevention. Health experts urge the public to get a flu vaccine this year to make sure hospitals don’t get overwhelmed.
“Particularly as we go on the other side of Labor Day and enter into the fall … we don’t want to go into that with another surge that we have to turn around again,” said Dr. Anthony Fauci, director of the National Institute for Allergy and Infectious Diseases.

What we learned after Fourth of July celebrations

Several states suffered record numbers of new hospitalizations or deaths after the Fourth of July holiday — erasing much of the progress made during painful economic shutdowns.
“By the middle of June, we were pretty much at our nadir in terms of new Covid-19 cases. We are around 20,000 new cases (per day),” said Dr. Peter Hotez, dean of the National School of Tropical Medicine at Baylor College of Medicine.
“And then after July Fourth, that’s when things really started to rev up and accelerate to the point where we went up to 65,000, 70,000 new cases a day. And now we’re back down to 40,000 cases,” Hotez said Monday.
“Unfortunately, we’re already at a much higher level than we were in the weeks before the July Fourth holiday. So I don’t think it’ll take much to really bring us back up to 70,000 new cases a day.”

Some are letting their guard down

Despite lessons learned from previous complacency — including more economic closures — some people are already flouting safety this Labor Day weekend. 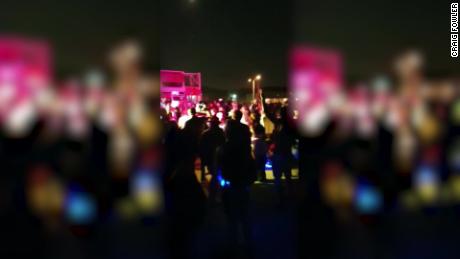 In San Francisco, an event celebrating Burning Man culture had more than 1,000 people packed together at Ocean Beach, Mayor London Breed said.
The gathering was “reckless and selfish,” the mayor said, and city officials announced the parking lot at Ocean Beach would be closed.
In Atlanta, party promoters touted “The Biggest Labor Day Weekend Party in the City” hosted by rapper Gucci Mane at a local nightclub.
And a “Sunday Funday” rooftop party was advertised with an image of people standing close together, some without masks. There was no mention of safety precautions in the ad.

Another official sees little chance of vaccine by Election Day

President Donald Trump again on Labor Day talked about possibly having a vaccine before Election Day, a timeline experts have cast doubt on.
And Monday, another federal official said that despite the President’s positive statements, there’s hardly any chance a vaccine will be available to Americans by November 3.
“I don’t know any scientist involved in this effort who thinks we will be getting shots into arms any time before Election Day,” said the official, who is familiar with Operation Warp Speed, the federal government’s effort to develop coronavirus vaccines.
Several times the President has said a vaccine will come “very soon,” and Monday he said it could come before a “special day.”
But officials such as Moncef Slaoui, the chief adviser to Operation Warp Speed, and Dr. Larry Corey, who is leading a group set up by the National Institutes of Health to work on coronavirus vaccines, have said the odds of that happening are low.

As the United States wraps up the Labor Day weekend, 16 states are seeing the number of coronavirus cases growing by more than 10%.
Experts continue to call on the public to wash their hands, watch their distance and wear their masks.
“Maybe the greatest error in our pandemic response — and we’ve had a panoply of errors — is the failure to get the entire country to wear masks,” Dr. Jonathan Reiner, CNN medical analyst and professor of medicine at George Washington University, told CNN’s Erica Hill on Monday.
More than 189,000 people in the United States have died from Covid-19, a total higher than any other nation, according to Johns Hopkins University. The US also has one of the highest death rates per 100,000 residents.
“When you look at countries where the mortality is a fraction of what it is in the United States, the common theme from the very beginning of the pandemic was universal masking,” Reiner added.
Reiner said the US response to the coronavirus pandemic has been an “abysmal failure.”
“The virus went all over the world,” he said. “It didn’t just come to the United States, but because of that panoply of errors and our failure to learn from our mistakes, our failure to get the country to social distance and to mask up has kept us in the realm of about 1,000 deaths per day.”
The seven-day moving average of deaths compared to the previous week is rising in 15 states but falling in 22.