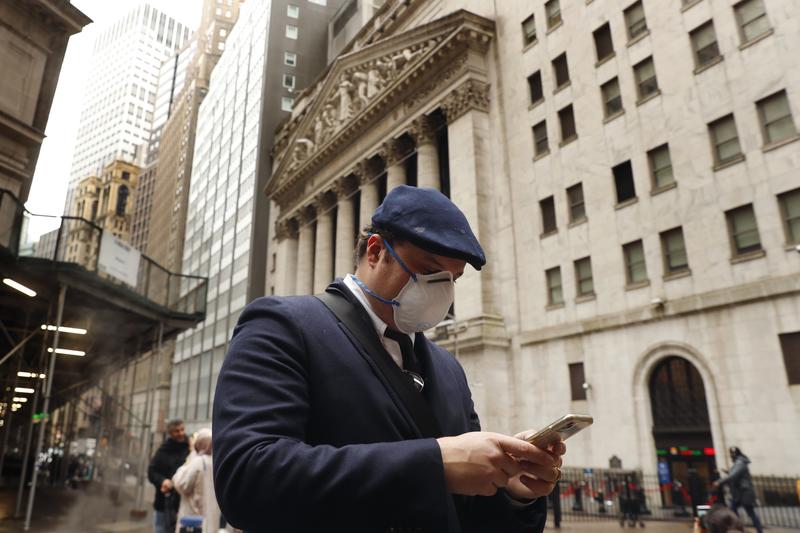 NEW YORK (Reuters) – The dollar weakened and world stock markets rallied on Monday on encouraging signs of progress in developing a COVID-19 vaccine, while several multi-billion dollar deals also helped lift the spirit of investors after the downdraft in the past two weeks.

Gold jumped almost 1% as the dollar slid and bond yields were stable as investors gauge how the U.S. Federal Reserve will put its new approach to monetary policy into practice and keep its dovish stance at this week’s policy meeting.

Pfizer Inc PFE.N and BioNTech SE 22UAy.F on Saturday proposed expanding their Phase 3 COVID-19 vaccine trial to about 44,000 participants, while increasing the diversity of the trial population.

Drugmaker AstraZeneca AZN.L also said on Saturday it has resumed British clinical trials of its COVID-19 vaccine, one of the most advanced in development, after getting the green light from safety watchdogs.

Enrollment of new patients and other trial procedures for AstraZeneca’s pivotal U.S. trial were being rescheduled until at least midweek and it was not clear how long it would take for a U.S. investigators to complete a probe, sources told Reuters.

“The market reacts positively to any vaccine news,” said Tim Ghriskey, chief investment strategist at Inverness Counsel in New York. “We’re going to see a lot more vaccines come out, and that is what really is helping the markets.”

The World Health Organization reported a record one-day increase in global coronavirus cases on Sunday, with the total rising by 307,930 in 24 hours. The biggest increases were from India, the United States and Brazil.

“There is still some caution in markets because U.S. virus numbers appear to be picking up again in some states,” said Seema Shah, chief strategist at Principal Global Investors.

“The vaccine news is positive but there is a lot of skepticism about when they become widely adopted,” Shah said.

Plans by Nvidia Corp NVDA.O to buy British-based chip designer Arm from Japan’s SoftBank Group Corp 9984.T for as much as $40 billion, a deal expected to reshape the global semiconductor landscape, also drove sentiment. Nvidia shares, which have more than doubled this year, added 5.8%.

Oracle ORCL.N surged 4.3% as the cloud services company said it would team up with China’s ByteDance to keep TikTok operating in the United States, beating Microsoft Corp MSFT.O in a deal structured as a partnership rather than an outright sale.

MSCI’s benchmark for global equity markets .MIWD00000PUS rose 1.17% to 572.57. In Europe, the broad FTSEurofirst 300 index .FTEU3 edged up 0.07% to 1,429 as losses in the energy sector offset surging travel and technology stocks that were boosted by the vaccine news.

On Wall Street, the Dow Jones Industrial Average .DJI rose 1.18%, the S&P 500 .SPX gained 1.27% and the Nasdaq Composite .IXIC added 1.87% after plunging 10% into corrective territory on Friday from a record closing high on Sept. 2.

U.S. stocks had notched two straight weeks of losses as investors sold the technology shares that fueled the benchmark S&P 500 and Nasdaq to record highs in a dramatic recovery from March lows spawned by the pandemic-induced downturn.

The Fed starts a two-day policy meeting on Tuesday, the first since unveiling a landmark shift to a more tolerant stance on inflation in August. The Bank of Japan and the Bank of England announce their respective policy decisions on Thursday.

Sterling, which has been hurt by renewed Brexit turmoil, firmed before a vote on British Prime Minister Boris Johnson’s plan to break international law by breaching parts of the Brexit divorce treaty with the European Union.

Turkey’s lira set a record low against the U.S. dollar TRY= and its dollar bonds came under pressure after Moody’s cut the country’s sovereign rating and warned of the risk of a balance of payment crisis.

Oil prices slipped slightly on concerns about a stalled global economic recovery as Libya is poised to resume production, and failed to get support from an impending storm that has disrupted U.S. oil output.