United States of obesity: Grim CDC map reveals the 12 states in the South and Midwest where more than 35% of people are ‘dangerously’ overweight and at risk for COVID-19

Twelve US states now have obesity rates of at least 35 percent – more than ever before, a new map reveals.

More than one-third of adults in Alabama, Arkansas, Indiana, Kansas, Kentucky, Louisiana, Michigan, Mississippi, Oklahoma, South Carolina, Tennessee and West Virginia were dangerously overweight in 2019, according to the data released on Thursday by the Centers for Disease Control and Prevention (CDC).

This marks 33 percent increase from 2018, which showed obesity prevalence at 35 percent or higher in nine states.

Colorado fared relatively the best with an obesity rate of just 23.8 percent, while Mississippi had the worst rate at 40.8 percent.

In the annual report, the researchers warn that obesity can worsens outcomes from COVID-19, increasing the risk of severe illness, hospitalization and even death. 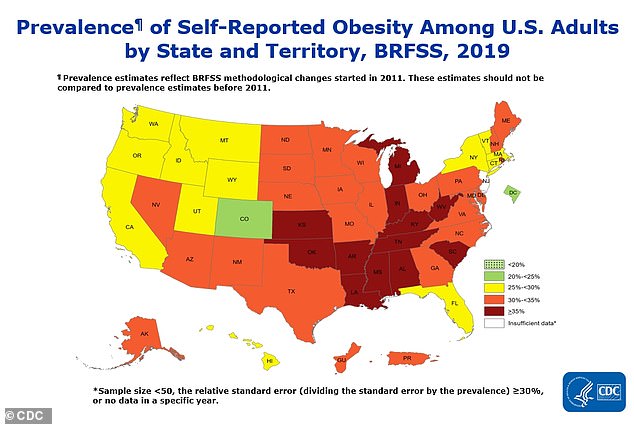 Data came from the Behavioral Risk Factor Surveillance System, which is a survey conducted via telephone by the CDC and state health departments.

The CDC report revealed the obesity rates increased as the level of education decreased.

Discrepancies were also apparent among races.

Just six states had an obesity prevalence of 35 percent or higher among white adults.

By comparison 15 states had the same obesity prevalence among Hispanic adults and 34 states has a black population of which at least one-third were obese.

Researchers also found that middle-aged adults were about twice as likely to be dangerously overweight as young adults.

Disparities were also seen between regions of the US.

For the first time in at least three years, the Midwest overtook the South as the region with the highest rate of obesity at 33.9 percent, but the South wasn’t far behind at 33.3 percent.

Meanwhile the Northeast and the West sat at 29 percent and 27.4 percent, respectively.

Obesity is known as a risk factor for several chronic health conditions including type 2 diabetes, strokes, heart attack and even certain types of cancer. 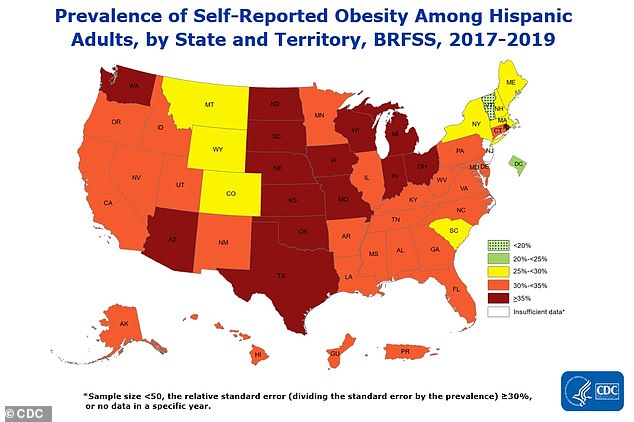 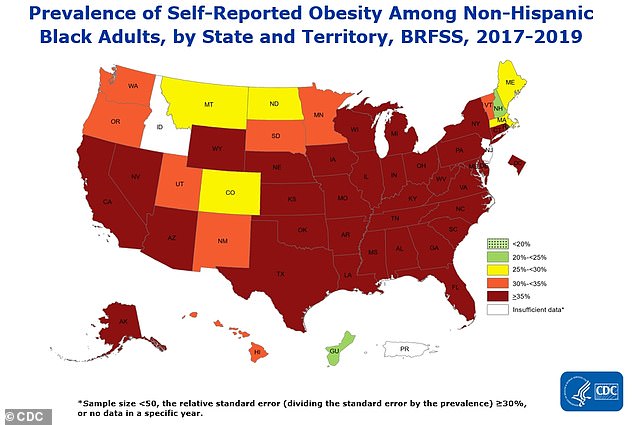 CDC warns that obese people are at a high risk of severe illness, hospitalization and death from COVID-19. Pictured: Map showing 34 states with a black population in which 35% or more are obese

However, adults with obesity are also an increased risk for severe outcomes from COVID-19, including severe cases, hospitalization and death.

A study of the 2009 H1N1 flu pandemic, found that obese people were twice as likely to be hospitalized compared with the state population.

This means that obese people diagnosed with COVID-19 could put an even further strain on already overwhelmed hospitals.

Additionally, a recent study from the University of Michigan School of Public Health found that obese adults who become infected with the flu are not only at a greater risk of severe complications, but remain contagious longer.

This means that obesity is tied to an increased risk of flu transmission. With 75 percent of US adults predicted to be overweight or obese by 2030, this could result in a loss of thousands more more lives to the flu, or the coronavirus.

Although it is unclear why obese adults are more contagious, scientists believe it may be that that obesity changes the body’s immune response and leads to chronic inflammation.

‘While system and environment changes can take time, we can take small steps now to maintain or improve our health and protect ourselves during this pandemic,’ the CDC authors wrote.

‘Being active and eating a healthy diet can support optimal immune function and help prevent or manage chronic diseases that worsen outcomes from COVID-19.’