A decline in mammograms and other screening procedures after the coronavirus pandemic struck is leading to missed and delayed cancer diagnoses, according to data from insurance claims, lab orders, Medicare billings and oncology-practice records, an emerging pattern that is alarming oncologists.

Hundreds of thousands of cancer screenings were deferred after worries about Covid-19 shut down much of the U.S. health-care system starting this spring. Because many cancers can advance rapidly, months without detection could mean fewer treatment options and worse outcomes, including more deaths.

“There’s really almost no way that doesn’t turn into increased mortality,” with the full effects likely to play out over a decade, said Norman E. “Ned” Sharpless, director of the National Cancer Institute. Missed screenings and other pandemic-related impacts on care could result in about 10,000 additional deaths from breast and colon cancer alone over the next 10 years, the NCI projected earlier this year. Dr. Sharpless said the estimate now appears low. 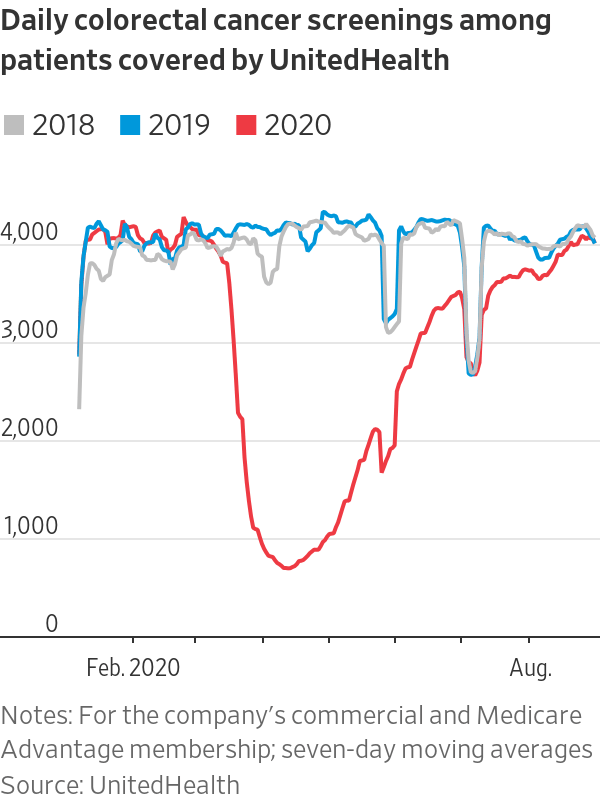 Cancer-care provider 21st Century Oncology, which has 300 locations around the U.S., said about 18% of its newly diagnosed breast-cancer patients this year through August had an advanced stage of the disease, compared with 12% in all of 2019. From 2015 to 2019, the share of its breast-cancer cases detected at an advanced stage was between 11% and 12.5%. The provider has also seen a higher proportion of its lung-cancer patients arriving with a more advanced stage of the disease this year.

“It’s distressing as a physician,” said Constantine Mantz, chief policy officer for 21st Century Oncology, which is a unit of Australian company GenesisCare.

The early data on cancer underscore concerns that the negative health impact of the coronavirus extends well beyond the direct effects of Covid-19. This year, deaths tied to a range of medical conditions—from Alzheimer’s disease to heart attacks—have exceeded those of previous years in what physicians and researchers say reflects stress from the pandemic and deferred medical care.

Richard Wehmeyer died of lung cancer this September, just a month after a stage-four diagnosis was confirmed. A computerized tomography scan a year earlier had first detected a tiny, potentially cancerous nodule in his right lung and he was urged at the time to get another scan in three to six months.

Mr. Wehmeyer, a 70-year-old respiratory therapist who lived in Nolensville, Tenn., never made the follow-up appointment. His son, Nic, and the oncologist who treated him, Todd Bauer of Tennessee Oncology, said he didn’t want to risk exposure to the coronavirus after it emerged this spring, partly because his sons have compromised immune systems. After coughing up blood, he went to a hospital in August and learned the tiny nodule had grown into metastatic disease.

“I wish he would have prioritized it,” said Nic Wehmeyer, who lives in New York but stayed with his father in Tennessee this spring. The cancer “wasn’t caught until it was past the tipping point.”

Data from lab giant
Quest Diagnostics Inc.
shows that freshly-detected cases of several types of cancer dropped sharply this spring. The mean weekly number of newly diagnosed breast cancer patients fell by nearly 52% for March and early April, compared with figures before the pandemic. This missing cohort means there are likely many patients with undiagnosed cases, said Harvey Kaufman, a senior medical director at Quest. 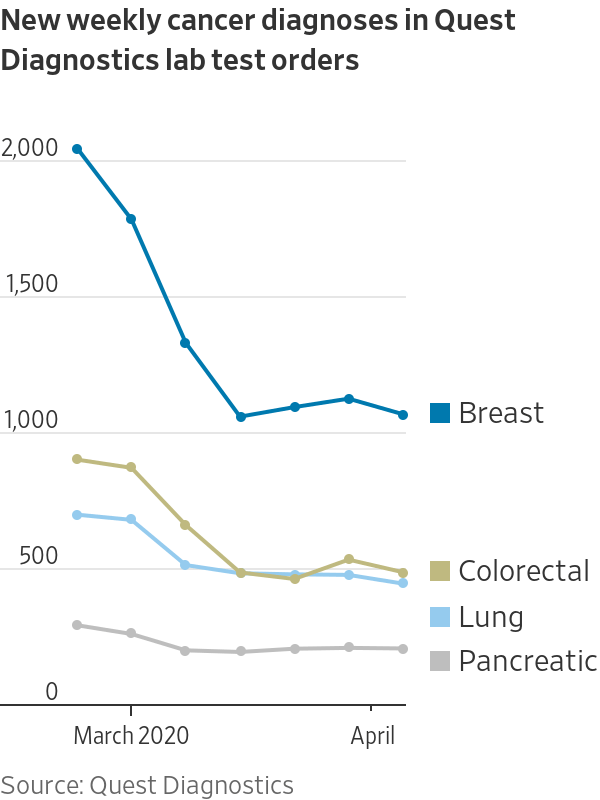 In March, as much of the U.S. health-care system stopped performing routine procedures, the number of cancer screenings plummeted, according to data from insurers, electronic medical records and a patient survey. Many clinics paused in-person visits. Some people, nervous about the virus, decided to hold off on checkups. Other patients, seeking to avoid doctors’ offices and hospitals, chose to ignore nagging, unexplained symptoms, oncologists say.

“We undoubtedly will have delays in diagnoses, and more advanced cancers,” said William Cance, chief medical and scientific officer of the American Cancer Society.

Claims tallied by researchers at
UnitedHealth Group Inc.,
parent of the largest U.S. health insurer, show mammograms dropped by as much as 95% in the second week of April compared with that same week in previous years. Screenings began to resume later in the summer, though they returned only to typical levels. 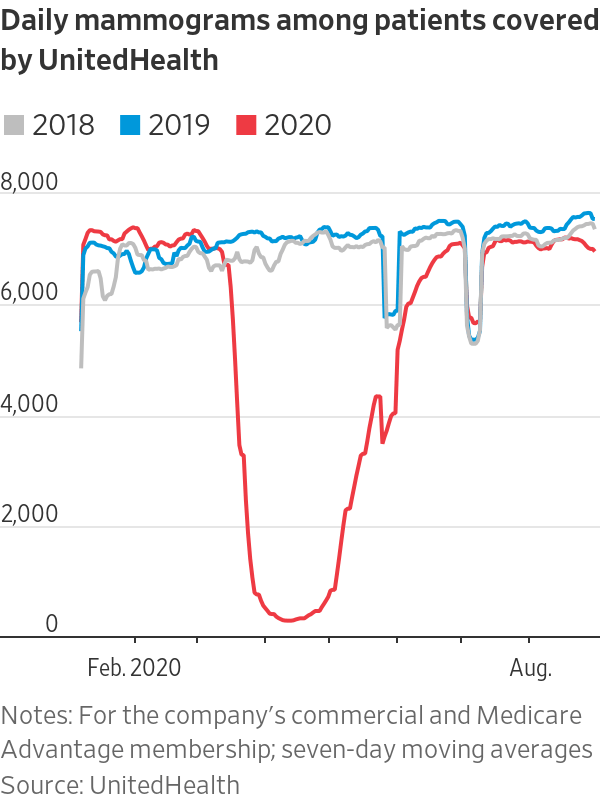 Researchers didn’t see the above-normal totals that would be expected if all of those who missed procedures this spring returned for them later in the year and no one else skipped their screenings, said Deneen Vojta, executive vice president for global research and development at UnitedHealth.

“There’s clearly no makeup,” she said.

An analysis of a sample of Medicare billings by the Community Oncology Alliance and Avalere Health, a consulting firm owned by
Inovalon Inc.,
highlights other signs of undetected cancer patients. New-patient oncology visits were down between 29% and 70% in the months between March and July, compared with the same months a year earlier. Biopsies for breast, lung and colon cancer fell between 11% and 79% over the same span, according to Debra Patt, an executive vice president at Texas Oncology, who was a lead researcher on the study.

One of Dr. Patt’s patients, Brenda Hudson of Buda, Texas, says her primary care physician told her to get a mammogram in June, but she waited until August to get it done. At 66, with no family history of breast cancer, she felt her risk was low and she was nervous about the coronavirus.

“I’m like, ‘I’m just not ready to be in a lot of medical facilities,’” she said.

The mammogram detected a small lump in Ms. Hudson’s right breast and a biopsy confirmed the cancer diagnosis. She will be treated with chemotherapy and a lumpectomy, followed by radiation. Dr. Patt said Ms. Hudson’s cancer is fast-growing and while she has a good prognosis, she might not have needed to get chemotherapy if it had been detected in June.

Write to Anna Wilde Mathews at anna.mathews@wsj.com and Mike Cherney at mike.cherney@wsj.com