Covid-19 IS becoming less fatal: Likelihood of Americans dying from the virus drops 30% since April due to improved treatments, study finds

By Emily Crane For Dailymail.com and Reuters

The likelihood that a coronavirus infection will prove fatal has dropped by nearly a third since April due to improved treatment, researchers say.

In the United States, COVID-19 now kills about 0.6 percent of people infected with the virus, compared with around 0.9 percent early in the pandemic, a study from the University of Washington’s Institute for Health Metrics and Evaluation has found.

The seven-day rolling average for deaths is currently at about 1,000 per day.

Despite new cases and hospitalizations surging to record daily-highs, the number of Americans dying per day has not been rising at the same rate.

Deaths, which are a lagging indicator and can potentially rise weeks after infections, are still down from the peak 2,000 fatalities recorded per day back in April.

The seven-day rolling average for deaths is currently at about 1,000 per day. Deaths, which are a lagging indicator and can potentially rise weeks after infections, are still down from the peak 2,000 fatalities recorded per day back in April

IHME Director Dr Christopher Murray said the statistics reflect that doctors have figured out better ways to care for coronavirus patients, including the use of blood thinners and oxygen support. Effective treatments, such as the generic steroid dexamethasone, have also been identified.

Experts have struggled to accurately measure a crucial metric in the pandemic: the fatality rate, or percentage of people infected with the pathogen who are likely to die.

The difficulty is exacerbated by the fact that many people who become infected do not experience symptoms and are never identified.

IHME said it had been using an infection-fatality rate derived from surveys after accounting for age.

Older people are at much higher risk of dying from COVID-19 than younger people.

‘We know the risk is profoundly age-related. For every one year of age, the risk of death increases by 9 percent,’ Murray said.

The institute, an influential source of COVID-19 forecasts, said it has also determined that the fatality rate for COVID-19 is worse in communities with high levels of obesity. 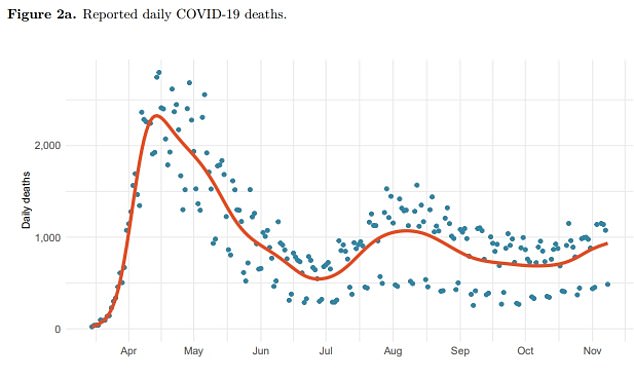 In the US, COVID-19 now kills about 0.6 percent of people infected with the virus, compared with around 0.9 percent early in the pandemic, a study from the University of Washington’s Institute for Health Metrics and Evaluation has found 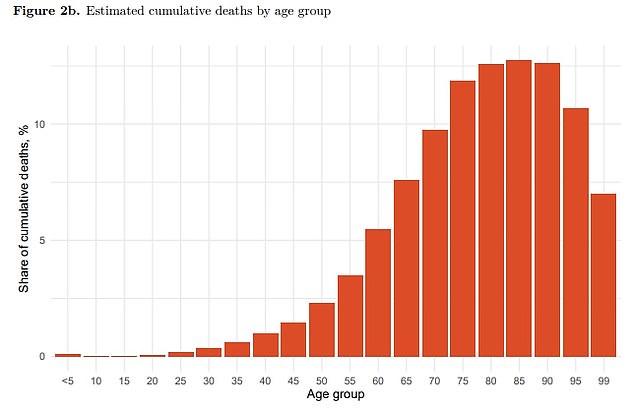 The majority of COVID-19 deaths occur in people aged over 65. Older people are at much higher risk of dying from COVID-19 than younger people

COVID-19 currently ranks as the number two cause of death across America in the last week, with heart disease being the main cause 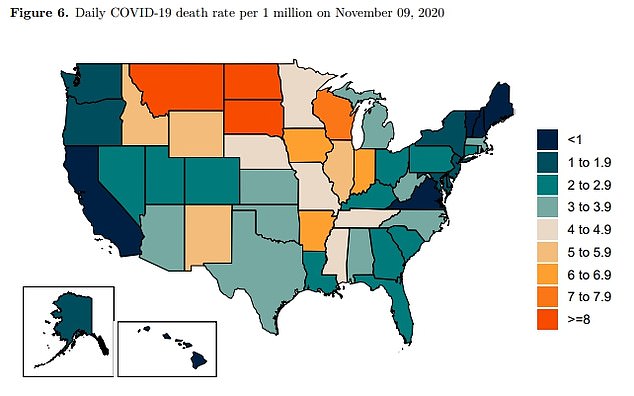 This map IHME map shows the daily COVID-19 death rate per 1 million people. The highest death rates at the moment per capita are in the Dakotas and Montana

The group said it has now switched to an infection-fatality rate that varies over time – declining since the first pandemic wave in March and April by around 0.19 percent per day until the beginning of September.

It also varies across locations as a function of obesity prevalence and continues to vary based on population distribution by age.

IHME said its analysis of age-standardized fatality rates from more than 300 surveys suggests a 30 percent decline since March/April.

Despite that positive trend, infections and hospitalizations have continuously spiked to record highs across the country in recent weeks.

The average number of daily cases is now at 124,000. There are currently more than 67,000 patients being treated in hospitals nationwide.

This new wave appears bigger and more widespread than the surges that have happened in the spring and summer – and threatens to be worse.

While the first surge in the Northeast caught many Americans unprepared and cut an especially deadly swath through nursing homes, the second crest along the nation’s Southern and Western rim was attributed mostly to heedless behavior, particularly among young adults over Memorial Day and July Fourth, as well as hot weather that sent people indoors, where the virus spreads more easily. 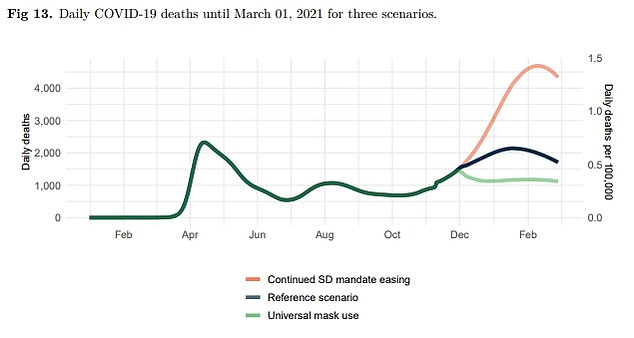 IHME said its modeling has predicted there could be a peak of daily deaths in mid-January at 2,200 based on the current trajectory. That lowers to just over 1,000 if the majority of Americans wear masks from now 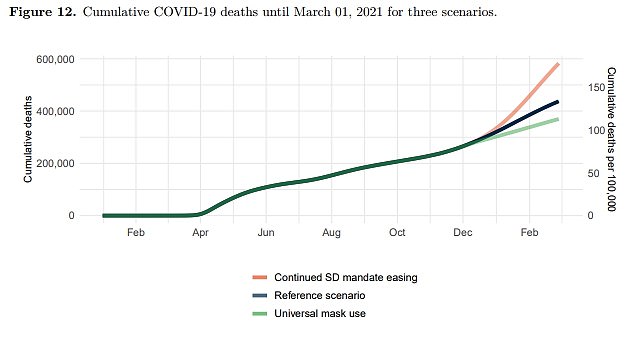 IHME said its modeling has predicted 439,000 cumulative US deaths by March 1 based on the currently public health measures and trajectory

The fall surge similarly has been blamed largely on cold weather driving people inside and disdain for masks and social distancing.

Experts, however, say there are also reasons to think the nation is better able to deal with the virus this time around.

While fatalities could still potentially rise given it takes time for people to get sick and die, doctors believe the death toll might not be as bad as the initial waves because doctors now better know how to treat severe cases, meaning higher percentages of the COVID-19 patients who go into intensive care units are coming out alive.

Patients also have the benefit of new treatments, namely remdesivir, the steroid dexamethasone and an antibody drug that won emergency-use approval from the Food and Drug Administration this week.

Health officials have warned, however, that patients could start dying if hospitals become overwhelmed.

IHME said its modeling suggests 439,000 cumulative US deaths by March 1 and a peak of daily deaths in mid-January at 2,200.

Weight loss: 7 effective tips and secrets to shed pounds that most people do …