Citing ethical concerns about the use of embryonic stem cells in vaccine development, Bishop Joseph Brennan of the Diocese of Fresno is urging Catholics not to “jump on the COVID-19 vaccine bandwagon.”

In a video shared by the diocese this week, Brennan said the race to produce a coronavirus vaccine has spurred researchers to make use of morally objectionable materials.

“I try to maintain a joyful spirit, so I don’t like to rain on anyone’s parade,” Brennan said. “But I’m going to rain on a parade today: the vaccine parade.”

In his message, Brennan said the use of embryonic stem cells at any stage of a vaccine’s development means Catholics cannot avail themselves of its scientific results.

“I won’t be able to take a vaccine, brothers and sisters, and I encourage you not to, if it was developed with material from stem cells that were derived from a baby that was aborted, or material that was cast off from artificial insemination of a human embryo,” he said. “That’s morally unacceptable for us.”

With a COVID-19 vaccine drawing closer, public health officials across the country are gearing up for the biggest vaccination effort in U.S. history.

He cited the Pfizer vaccine by name, which — along with another vaccine from Moderna — has been roundly celebrated as a breakthrough in the fight against the coronavirus.

“Not a single stage has had it,” she said.

Representatives for Moderna did not immediately respond to requests for comment.

Both vaccine candidates are made with a snippet of the coronavirus’ genetic code, and both are estimated to be roughly 95% effective. U.S. officials have said they hope to have about 300 million doses of effective vaccines available for distribution by January.

But Brennan joins a growing chorus of Catholic organizations concerned about stem cells and COVID-19 vaccines. In April, more than 20 Catholic leaders and prominent members of the U.S. Conference of Catholic Bishops signed a letter to the commissioner of the Food and Drug Administration urging the federal government to follow “moral principles” in the development of a coronavirus vaccine.

“It is critically important that Americans have access to a vaccine that is produced ethically,” they wrote. “No American should be forced to choose between being vaccinated against this potentially deadly virus and violating his or her conscience.”

Who will get the first COVID vaccines? California and other states race to decide 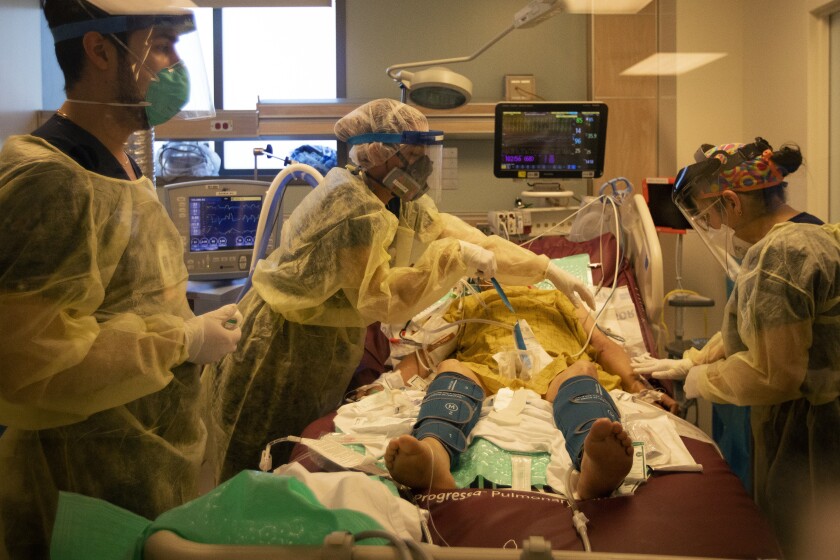 Who will get the first COVID vaccines? California and other states race to decide

California and other states are racing to finalize plans for who will get the first doses of COVID-19 vaccines and how they will be delivered.

In July, the Philadelphia-based National Catholic Bioethics Center shared a statement in which President Joseph Meany described the potential reliance on a stem cell-developed vaccine as a “nightmare scenario” that would “cause major conscience problems for pro-lifers and Catholics.”

Meany went on to say that he is confident that researchers can develop a vaccine for the virus without making use of such cells, something Brennan stated as well.

But his words come amid an alarming nationwide surge of COVID-19. More than a million new cases were recorded last week alone, and California is currently sustaining its highest-ever counts for daily cases, surpassing 10,000 new daily cases four times in the last week and recording a single-day high of more than 5,000 new cases on Thursday.

Neither Meany, Brennan nor the chancellor of the Fresno Diocese responded to requests for comment.

“A Keto diet plan that customizes your meal plan and completely transforms your life.” Int…

Are your pants tighter even though you haven’t changed your eating habits? Does it …