March 01, 2021
Trending
Home Health News This young ER doctor had to tell Covid-19 patients when it was time to say goodbye to their families. Then the virus knocked him down – CNN

He had to let patients know when it was time to say their final goodbyes to their families.
“The hard thing is having to be the person that talks to the patient with Covid, who says, ‘You know what? It’s time to call your wife. We are going to have to put a breathing tube down and it’s time for you to say goodbye,'” Burkard said.
It was a message the emergency room physician had to deliver again and again as the pandemic stretched through summer and into the shorter days of fall.
Burkard, 28 and in his third year of residency at Spectrum Health Systems in Grand Rapids, Michigan, did what he needed to do to keep himself safe. He wore protective equipment at work, a mask on his own time and kept socially distant, he says. 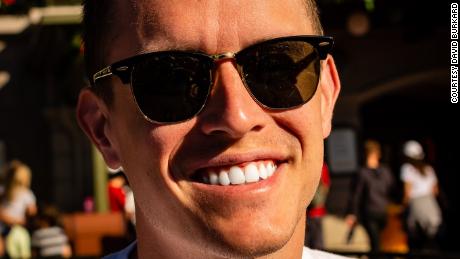 He ran five days a week, played and coached volleyball, ate a healthy diet and had no major underlying conditions. If he did get infected, he thought, he’d be fine.
“I actually, at one point, thought, ‘I want to just get the virus and get it over with,'” he told CNN. “I thought there was no real chance of me having to be hospitalized. I’m a healthy young man.”

‘I just could not breathe’

And then came the sickness and the positive result for Covid-19.
It started with a fever and a cough, and Burkard felt ill, but after three days things improved markedly. He knew younger people could get really sick from the virus, but it seemed he had dodged that bullet. Then day six came around.
“I got out of bed. I went to make a sandwich and move around my apartment a little bit and I just couldn’t catch my breath,” Burkard said. “I just could not breathe.”
He tested his own oxygen levels and he knew — and so did his colleagues when he called — that he had to be admitted.
He went to his own hospital, where so much was familiar but so much was new — and terrifying.
The isolation and loneliness of going into the Covid-19 unit. The suffocating feeling of being breathless. The fear. It was all there, with no friends and family around to soothe his worries. 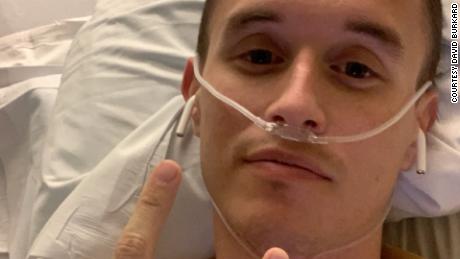 “I’m literally at work where I have lots of friends and colleagues and not a single one of them could come and just say hi,” Burkard said. “I couldn’t be more grateful for the nurses, phlebotomists and doctors that continued to treat me with a smile under their masks.”
Burkard doesn’t know how he contracted the virus, but he does know it’s no joke to live with. Two weeks after testing positive, he still can’t walk without having a hard time breathing.
He’s been staying at home, where he’s had time to see social media reactions to his diagnosis from those who still don’t believe the reality of a virus that has killed more than 250,000 Americans and infected 11 million more.
“I’ve had a lot of people say … I’m a hoax. I had someone report me to Facebook for being a fake profile,” he said.
He hopes that some people will think twice about his experience.
“Instead of just saying mean things from behind the keyboard, imagine what it’s like to have that conversation with someone that you were putting a breathing tube down their throat, and they might not be able to say ‘I love you’ to their loved one again,” he said.
Interactive: 105 families share memories of those they’ve lost to coronavirus
Burkard says he loves being an ER doctor, and he lights up when talking about going back to work. That will have to wait until he is strong enough for the intense and taxing shifts. In the meantime, he feels guilty knowing his colleagues are working so hard as coronavirus hits more and more people.
Michigan’s test positivity rate rose to 11.6% this week, according to Johns Hopkins University. Its cases are skyrocketing and so are its hospitalizations.
Burkard says there are 300 Covid-19 patients in Spectrum Health, the main healthcare system in the area. It’s the most they have had since the pandemic began, he adds.
Burkard’s interview with CNN was the first time he had left his self isolation in his apartment after leaving the hospital. He is no longer shedding the virus, but any activity is still really hard.
“I needed this. It is nice to see people again,” Burkard said, slightly out of breath as he began to walk the short distance home.
He asked everyone to follow the guidance — stay home, wear a mask, socially distance outside and sit out this Thanksgiving get-together to save lives and celebrate later.
And he hopes he may serve as a cautionary tale.
“There is a lot more that we don’t know about this virus,” Burkard said. “Don’t take chances no matter how healthy you are.”