But now she and her husband of 35 years, Luis, are both patients at Renown Regional Medical Center.
“It’s scary, you know, you don’t expect to go to work and be working out of a parking garage,” said Janet Baum, nursing manager of the site. “We’ve made it a hospital, so we don’t consider it a garage anymore.”
As the US suffers another surge of cases, hospitals all over the country have felt the strain on their hospitals’ bed capacity. Washoe County, the region Renown serves, now has 10 times the number of cases that it did a couple months ago. 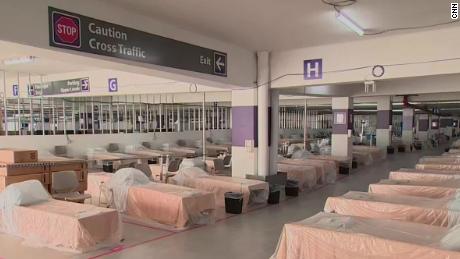 The idea came together earlier in the pandemic and out of concern for the community, and the building went from garage to health care center in about 10 days, said hospital CEO Anthony Slonim. Now that numbers are climbing and more people are being admitted, 700 hospital beds are filling the parking spots.
Rosalia Martinez was admitted to the hospital before her husband.
“When I found out she was sick; I cried. I thought she was going to die,” Luis Martinez said. Now, he is recovering from the virus as well, four beds down.
“He coughs at nighttime, I can hear him. And if I yell, he can hear me,” Rosalia said. “He knows that I’m still alive.”
Though coronavirus patients in parking spaces may sound odd, Luis Martinez said he feels safe there. The space is clean, and the staff is working hard to make sure they are all attended to, he said.
“I had just finished a seven day stretch in the intensive care unit. There had been patient after patient, after patient who was not surviving this illness and beyond the physical exhaustion of working a hundred hours that week, I was mentally fatigued,” Dr. Jacob Keeperman, medical director of Renown Transfer and Operations Center, said. So, he posted a tweet thanking his teammates.
So, it stung when President Donald Trump and a wave of Twitter users responded to his post saying the makeshift unit was fake.
The feedback he received online made that the worst day of the pandemic for him, he said.
“This is not fake. This is as real as it gets,” Slonim said. “And we take pride in knowing that we’re here.”
Other places struggling with lack of bed capacity have also resorted to unorthodox solutions.
In March, Central Park’s East Meadow turned into a 68-bed field hospital, and another 1,000 beds were added that month when the US Naval Ship Comfort docked in New York City.
“This is like an additional hospital just floated right up to our shores, and now it’s going to help to save lives,” New York Mayor Bill de Blasio said at the time.
In November, El Paso, Texas, brought in an additional 10 morgue units and 1,500 medical professionals — with the help of the National Guard and inmates — to deal with the growing death toll.