Five healthcare workers at the Kaiser Permanente hospital in Hollywood were among the first Californians to get the COVID-19 vaccine Monday, ushering in a new phase of a pandemic that has killed more than 21,000 people in the state and shattered the economy.

Gov. Gavin Newsom, state Health and Human Services Secretary Dr. Mark Ghaly, Los Angeles Mayor Eric Garcetti and L.A. County Supervisor Hilda Solis were on hand as the county’s first workers got their shots, the beginning of what will be a long campaign to vaccinate California, starting with front-line healthcare workers.

One by one, the Kaiser employees sat inside a conference room that had been turned into a vaccination center. Newsom asked each about their line of work before the shots were administered. Cheers broke out from nearby masked observers after each vaccination.

“This is yours?” Newsom asked Helen Cordova, a nurse in the intensive care unit and the first healthcare worker at the facility to receive the vaccine.

“That’s mine,” she said, pointing to the dose held a few feet away by hospital pharmacy supervisor David Cheng.

“Protect me,” she said laughing before Marilyn Lansaangan, a senior nurse for internal medicine, gave her the shot.

Cordova said the vaccine “provides hope for the future.”

Kim Taylor, a nurse in the emergency department, and Dr. Brian Thompson, an ER doctor, were the next to receive the vaccine. Thompson, 61, was born at the Kaiser hospital in Los Angeles where he has worked since 1988. He was raised in South Los Angeles, a community that has been hit hard by the virus in L.A. County.

“We’ve gotten through SARS, MERS — nothing compares to this,” said Thompson, who has tended to COVID-19 patients in the ER since March, when the initial outbreak forced the state into a lockdown.

Who will be at the front of the line for vaccines in California? Here’s what we know

Who will be at the front of the line for vaccines in California? Here’s what we know

The COVID-19 vaccine developed by Pfizer and BioNTech is now in California and could be distributed within hours.

The vaccine offers a new promise as California faces the darkest moment of the COVID crisis, with cases reaching unprecedented levels and hospitals filling up. As of Monday, the availability of intensive care beds in the San Joaquin Valley was zero, according to the latest available state data.

The vaccine won’t change those grim circumstances, but it does offer hope.

As Newsom put it Monday, there may be light at the end of the tunnel, but for now, “we’re still in the tunnel.”

“We are in the midst of the worst moment of this pandemic,” he said. “So today is hopeful, and it’s reason to be optimistic, but let’s be mindful of where we really are.”

Newsom said California has already received 33,150 doses of the vaccine developed by Pfizer and BioNTech.

The state’s initial vaccine allocation — about 327,000 doses in all — will go mostly to acute-care hospitals to be administered to healthcare workers, although some counties have said they also will send a portion to skilled nursing facilities.

California is planning on receiving roughly 2.1 million doses by the end of the year, Newsom said.

However, the vaccine isn’t expected to be available to everyone who wants it until at least the spring.

Though development of the COVID-19 vaccine was rapid — and played out amid the politically charged backdrop of a presidential election — officials emphasized Monday that residents should feel comfortable that the shots have been vetted for both their efficacy and their safety.

“These vaccines have not been infected by politics,” Garcetti said. “You can trust them. You should trust them.”

A working group of scientists and experts representing California, Nevada, Oregon and Washington has already reviewed the vaccine and endorsed its safety.

“We are on the brink of a historic moment for our city: The rollout of the COVID-19 vaccine is beginning,” said Dr. Grant Colfax, director of San Francisco’s public health department.

The vaccine was sent to Zuckerberg San Francisco General Hospital, which is run by the city.

“It will be a long rollout — and too late for this surge,” Colfax said, noting that more San Franciscans are infected with the coronavirus than at any previous time during the pandemic.

“I think it is very important to step back for a moment and realize how dire our situation has become,” Colfax said.

During the last week, the city has reported more than 200 new cases of the coronavirus every day, and there are no signs the surge is abating, he said. In San Diego County, three boxes of doses arrived Monday, the county tweeted. Those will be used both by the county itself — which operates the San Diego County Psychiatric Hospital — as well as by local hospitals. Five medical centers are expected to receive allotments from the first batch of vaccines, though it was unclear how many doses they would get.

In total, San Diego County will initially receive 28,275 doses of vaccine. Each will be given to hospital healthcare workers at the highest risk of exposure.

L.A. County Public Health Director Barbara Ferrer acknowledged that Monday was “a monumental day,” but stressed that, because it will probably be months before vaccines are widely distributed to the general public, residents must continue to make use of all available tools to protect themselves and their loved ones.

That’s particularly the case, she said, as the county contends with an alarming surge in newly confirmed coronavirus cases, as well as record numbers of COVID-19 patients in its hospitals.

“The choices every person and every business make throughout each day have an impact on what happens in our hospitals,” she said during a briefing Monday. “If you’re not playing by the rules, to put it blunt, at this point you’re part of the problem, and you’re contributing to the distressing increases that we see in cases, hospitalizations and deaths.”

Your questions about COVID-19 vaccines answered 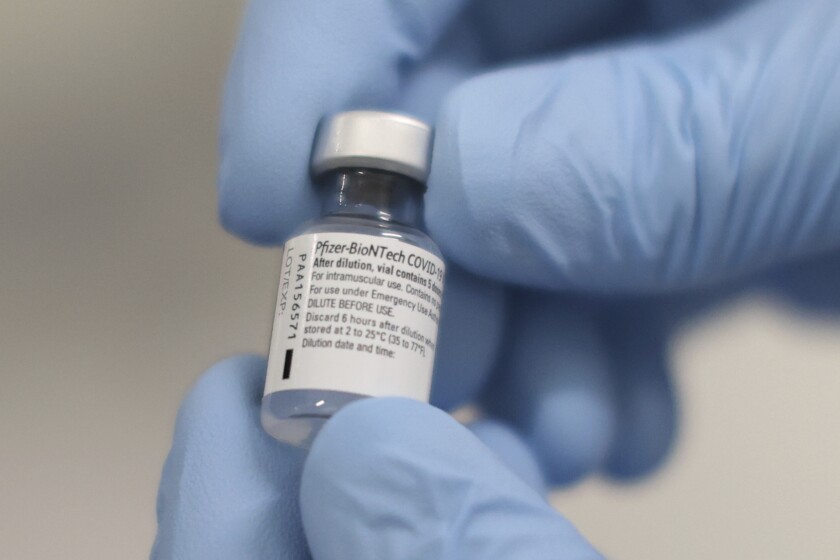 Your questions about COVID-19 vaccines answered

COVID-19 vaccines are now being administered to healthcare workers in the U.S. What are your questions about the timeline, the safety or the science?

While mass immunization against COVID-19 may be drawing closer, officials stressed that now is not the time to relax.

For the time being, “we must hunker down” once more, Solis said Monday.

“But the difference now is we can see an endpoint,” she said. “The pandemic will not last forever. The offramp is in plain view.”

That’s particularly the case as California, like much of the nation, is in the throes of the worst wave of the disease. Record numbers of people are being infected and hospitalized with COVID-19, and space in intensive care units across the state has shrunk to dangerous lows.

The state has averaged 31,777 new coronavirus cases a day over the last week — the highest level ever and a whopping 128% increase from two weeks ago, according to data compiled by The Times.

The number of coronavirus-positive patients hospitalized statewide also continues to soar to new heights — reaching a record 13,635 as of Sunday. That’s an increase of 75% from two weeks ago, according to the latest data from the state.

That figure includes 1,287 people hospitalized with COVID-19 in Orange County and 4,403 in Los Angeles County — both record highs. 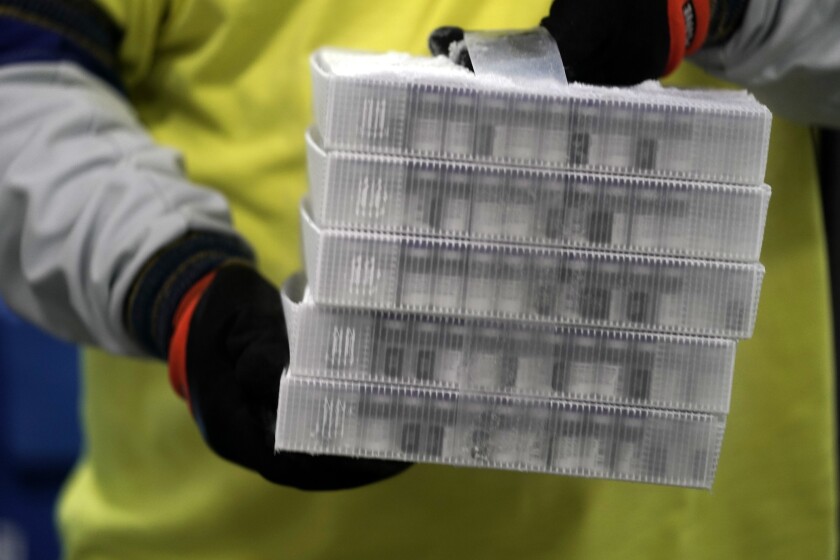 COVID-19 patients also are crowding into intensive care units at unprecedented levels. Statewide, there were 2,967 as of Sunday, a record high that’s 64% greater than two weeks ago.

“Many folks may be thinking that this is just not anything to really worry about, because hospitals can just add more beds,” Ferrer said. “The reality is every bed needs to be staffed by highly trained and skilled healthcare workers, and we don’t have an endless supply of healthcare workers. And those that are here saving lives every day are exhausted, and they’re disheartened by the reality that this isn’t the way it needs to be.”

The major concern, experts say, is that mortality rates could spike if ICUs can no longer accommodate the sickest patients.

“We can’t change the point that we’re at in this pandemic. We can’t go back in time,” said Dr. Christina Ghaly, L.A. County’s director of health services. “But we need to keep our focus on what we’re capable of doing at this point moving forward. And what we need to do is stay home as much as possible so we can all break this vicious cycle of transmission.”

Times staff writers Alex Wigglesworth, Tracy Wilkinson and Maya Lau contributed to this report, as did Jonathan Wosen and Andrew Dyer of the San Diego Union-Tribune .

In the ongoing debate about coronavirus face mask effectiveness, a new study published this …