Pfizer is coordinating with officials, will closely monitor all reports suggesting allergic reactions.

The first known allergic reaction to the Pfizer Inc. Covid-19 vaccine in the U.S. was reported in Alaska as some snarls began to emerge in the effort to send the shots across the country, highlighting the daunting challenges ahead for a historic immunization drive.

A health-care worker in Juneau, Alaska, with no history of allergies experienced flushing and shortness of breath 10 minutes after receiving a shot, the state health department said in a statement Wednesday.

The person was admitted to the emergency room and was given Pepcid, Benadryl and epinephrine through an intravenous drip. The patient stayed overnight and is in stable condition, according to the Alaska health department. 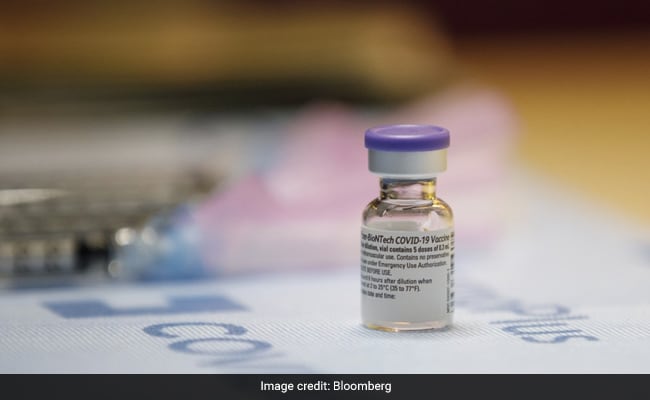 A vial of the Pfizer-BioNTech Covid-19 vaccine.

The episode follows reports of a handful of similar reactions in the U.K., where health officials advised that anyone with a history of severe allergies shouldn’t take the Pfizer vaccine. U.S. regulators recommended last week that people should be monitored for allergy symptoms for 15 minutes after getting the shot, which gained an emergency-use authorization from the Food and Drug Administration on Friday.

Pfizer is coordinating with local officials, will closely monitor all reports suggesting serious allergic reactions and will update labeling language if needed, spokeswoman Jerica Pitts said in a statement.

The incident came to light as the first hiccups in the distribution of the vaccine in the U.S. emerged on Wednesday, including a holdup in delivering 3,900 shots to two states and the announcement that Pfizer would deliver about 900,000 fewer doses next week than are set to ship this week.

The authorization of Pfizer’s shot kicked off a massive mobilization effort. Vaccines are being sent from two company production facilities in the Midwest to all 50 states, the first wave in what is expected to be a months-long campaign to inoculate as many people as possible and bring an end to a pandemic that has killed more than 300,000 in the U.S. A similar shot made by Moderna Inc. is expected to gain U.S. clearance in coming days.

One challenge in moving and storing Pfizer’s shot, which it developed with the German drug maker BioNTech SE, has been that it must be kept at ultracold temperatures in specialized freezers and containers. Four delivery trays of the shot were pulled back from delivery to California and Alabama this week and sent back to the company because they were colder than anticipated, according to Gustave Perna, the army general who serves as Operation Warp Speed’s chief operations officer.

Each of the trays can likely be used to vaccinate 975 people. Pfizer has said its formula needs to be stored at 70 degrees below zero Celsius, the equivalent of minus 94 degrees Fahrenheit. These trays were found to be much colder, according to Perna.

“We were taking no chances,” he said during a Wednesday news briefing. Pfizer and federal health agencies are working to determine whether the formula can still be used when it reaches such low temperatures, according to Perna.

Pfizer deploys the doses in temperature-controlled shipping containers that its own engineers developed. The containers are each equipped with GPS trackers “for continuous, real-time location and temperature monitoring,” according to the company, which has an around-the-clock control tower monitoring every shipment.

U.S. officials also said at the briefing that about 2 million doses of the Pfizer vaccine will be allocated for the country next week, fewer than the 2.9 million available this week when the first shots shipped. They offered no explanation.

Operation Warp Speed has said it expects to have enough vaccines between Pfizer and Moderna to inoculate 20 million Americans in December. It has contracted for 100 million doses of Pfizer’s vaccine, which requires two shots per patient. Azar and other officials pushed back on recent reports that the U.S. government declined to purchase more doses from Pfizer, saying the company couldn’t guarantee they’d be ready by mid-2021.

“They’re right now producing at their maximum capacity to deliver on the 100 million that is in the first tranche of the contract with us, and we’re providing manufacturing support,” he said.

Pfizer spokeswoman Sharon Castillo said in an email that the company hasn’t experienced any production issues.

“The relationship that Pfizer wanted with Operation Warp Speed was the guaranteed purchase of vaccine if approved by the FDA,” he said. Azar said that the government is talking with the company about getting more information on any challenges they are facing.

The drugs, made by Eli Lilly and Co. and Regeneron Pharmaceuticals Inc., are available for emergency use for less severe cases. They must be given through infusions, which has created logistical challenges for medical providers.

“We really hope to see a much, much higher level of usage of the doses that are delivered to the health-care facilities,” Moncef Slaoui, chief adviser to Operation Warp Speed, said on the briefing.

The antibody drugs are intended for older patients and people with other illnesses that put them at higher risk of hospitalization from Covid-19. They’re most effective when delivered early.

“The best time to get those antibodies is not when you show up in the emergency room, but soon after being diagnosed,” Azar said. The U.S. has allocated 300,000 doses to states, and many states have supply available, he said.

–With assistance from Riley Griffin and Jacquie Lee.

(Except for the headline, this story has not been edited by NDTV staff and is published from a syndicated feed.)

ANN ARBOR, MI — The Washtenaw County Health Department announced Saturday that it is …

Officials across Southern California are opening more sites to administer coronavirus vaccine. But there …

States, counties and cities say they are running out of coronavirus vaccines, leading to …