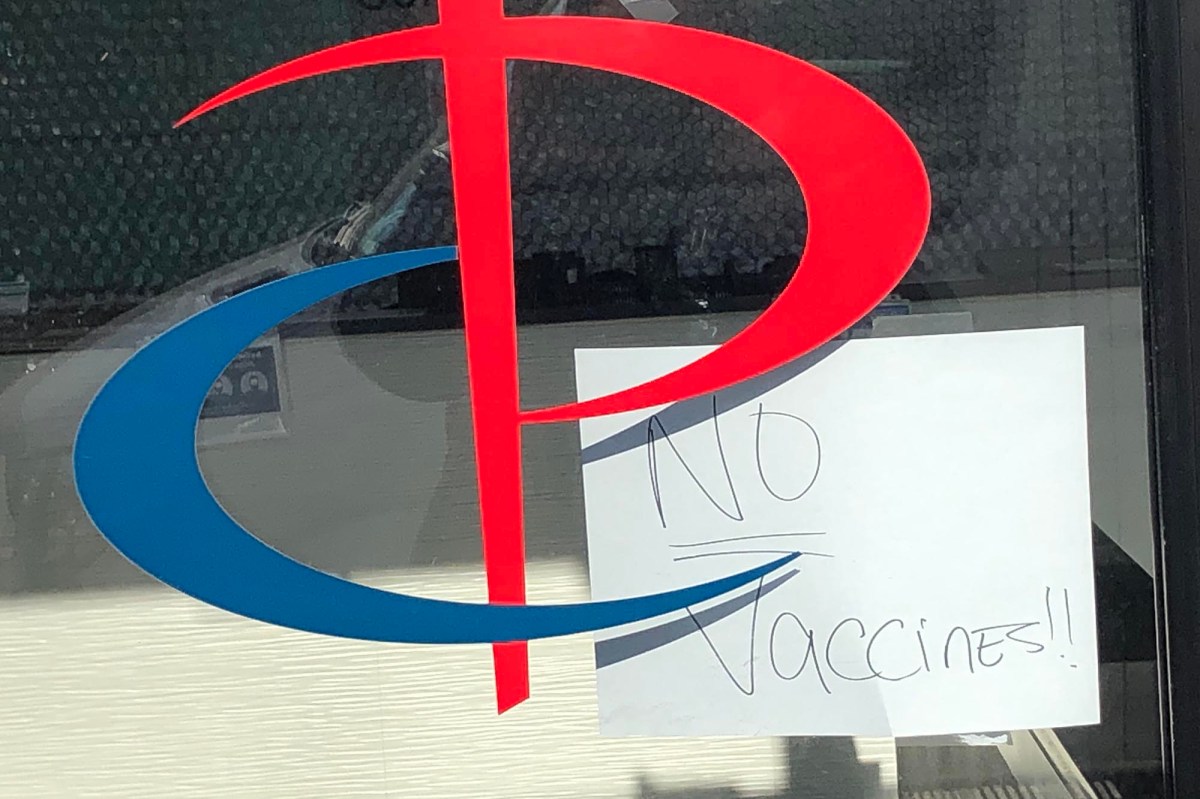 A hand-lettered sign saying “NO Vaccines!!” was taped to the front door of the ParCare Community Health Network storefront in Williamsburg after The Post inquired if injections were available.

Five people were seen going into the clinic at 445 Park Ave. but a reporter was denied entry, with a nurse saying, “We are only allowing people with appointments in.”

When asked if patients were getting inoculated against the coronavirus, the nurse said, “We do not have any vaccines.”

A man who showed up afterward was also barred from entering, later saying that he was “of course” there to get a shot.

“This isn’t right,” he groused.

A middle-aged man who walked by said that vaccinations had taken place there earlier.

“My father got the vaccine shot here,” the man said. “What, he should die for some political decision?”

Mark Meyer Appel, who runs The Bridge Multicultural Advocacy Project in Brooklyn, told The Post that he got a shot at the clinic on Wednesday after learning the vaccine was available.

Appel, 68, said he needed to be inoculated against COVID-19 because he has diabetes and operates a food pantry that puts him in contact with a lot of people.

“I’ve been out on the forefront more than the average person,” he said.

Appel also said he’s “not embarrassed I got the shot” but admitted that he took down a Facebook post about it in response to online criticism.

On Saturday, the state Department of Health announced it was assisting the state police in a criminal probe of ParCare, a not-for-profits organization that runs six clinics in Brooklyn, Manhattan and Orange County.

The investigation involves allegations that ParCare’s Orange County operation, in Kiryas Joel, “may have fraudulently obtained COVID-19 vaccine, transferred it to facilities in other parts of the state in violation of state guidelines and diverted it to members of the public,” Health Commissioner Howard Zucker said.

Zucker called the scam “contrary to the state’s plan to administer [vaccines] first to frontline healthcare workers, as well as nursing home residents and staffers.”

“Anyone found to have knowingly participated in this scheme will be held accountable to the fullest extent of the law,” he added.

On Dec. 21, ParCare claimed to have received 3,500 doses of the Moderna vaccine, with CEO Gary Schlesinger telling the BoroPark24 website, “Hundreds of patients were already vaccinated today, and people are still coming in.”

In a series of tweets early Sunday, ParCare said it’s “striven to provide critical healthcare services and administer COVID-19 vaccinations to those qualified to receive them under the New York State Department of Health’s guidelines.”

“As we actively cooperate with the New York State Department of Health on this matter, we will continue to perform top-quality healthcare services to help New York come out of this pandemic,” it added.