A suburban Milwaukee pharmacist who allegedly spoiled hundreds of COVID-19 doses by removing them from refrigeration has been arrested, authorities said Thursday.

Authorities have not determined a motive. The pharmacist has not been identified. 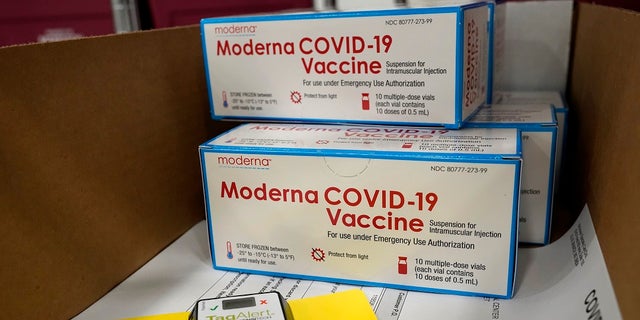 Boxes containing the Moderna COVID-19 vaccine are prepared to be shipped at the McKesson distribution center in Olive Branch, Miss. An employee at a Wisconsin hospital intentionally removed 57 vials of the Moderna vaccine from a refrigerator, resulting 500 doses being discarded, officials said Wednesday. (AP Photo/Paul Sancya, Pool)

Hospital officials said the unidentified pharmacist intentionally removed the 57 vials that held 500 doses of the Moderna vaccine from refrigeration overnight on Dec. 24 and left them out for two nights. The doses were returned and then removed again.

Hundreds of doses were discarded as a result. Moderna said there were no health risks associated with spoiled doses, clinical leaders during a virtual news conference Thursday.

A pharmacy technician discovered the vials outside a fridge on Saturday and reported the incident, said Dr. Jeff Bahr, president of the Aurora Health Care Medical Group.

Hospital officials initially determined the incident was the result of human error, saying the employee removed the vaccines to reach for something else in the refrigerator. But the employee eventually admitted to knowingly removing the vials from cold storage, aware that they would be ineffective if used.

The Moderna vaccine can be stored at room temperature for up to 12 hours before it is no longer viable. Clinicians administered some doses within that allowable window.

“We continued vaccinating until the remainder of the vaccine was discarded due to being rendered ineffective,” Bahr said.

Andrea Palm, the state Wisconsin Department of Health Services designee, said she was disappointed that COVID-19 vaccines were wasted.

“As we have seen over the last few weeks, our health care workers are eager to protect themselves from contracting COVID-19 through vaccination,” she said. “Immediately upon notification, DHS followed up with Aurora and has worked closely with them as they have investigated the situation, reviewed their processes and implemented improvements.”

“Those doses are meant for front line workers,’ she tweeted. “This senseless act puts them in danger.”

Bahr said the incident was the result of a “bad actor, as opposed to a bad process.” The incident was being probed by Grafton police, the I and the Food and Drug Administration (FDA) and the FBI.