The vaccine clinic at PeaceHealth St Joseph Medical Center has started giving health care workers and others in the community their second shot of the vaccine. The hospital has saved up some doses in case of supply chain issues that could interrupt the vaccine dosing timeline.

As states try to broaden the reach of their coronavirus vaccination campaigns and navigate uncertain supply chains, many of the first people to receive their shots are just now completing the final act of immunity, the second dose, which boosts the efficacy of both available US vaccines to about 95 percent.

Many health care workers and others at high risk who had the Pfizer shots in mid December lined up for their “booster” shot this week, due to be given 21 days after the initial dose.

The second shot carries many of the same logistical challenges as the first one, from cold chain requirements to administering the dose safely, plus the added challenge of ensuring the second dose is actually available to the correct people according to the drugmaker’s dosing timeline.

“In the United States, we are still struggling in many ways with our ability to simply get the vaccine into people’s arms, so the second dose adds further difficulties,” says Dr. Glenn Morris, director of Emerging Pathogens Institute at the University of Florida.

The availability of the doses, and the progress in reaching everyone in the 1A phase, still varies considerably across the U.S.

“The issue is really the unpredictable nature of the shipments,” says Maryellen Guinan of America’s Essential Hospitals, a group that represents more than 300 public hospitals around the U.S.

So far, there don’t appear to be widespread problems with people missing their second dose, but experts say it’s still early and the feasibility of a two-shot mass vaccine effort will be tested in the coming weeks, especially as those who received the Moderna vaccine await their follow up shot, which comes 28 days after the first.

More than 6.6 million people have received their initial shot in the U.S., according to the Centers for Disease Control and Prevention.

There isn’t national data on the completion rate for the second shot.

“If you’re having trouble keeping up with the crowds anyway, then it starts getting tricky and that reduces your ability to give a first dose to more people simply because you don’t have the logistics in place,” says Morris.

In Bellingham, Wash., a second sore arm came as a relief to ICU nurse Kate Marn, who cares for COVID-19 patients at PeaceHealth St. Joseph Medical Center, the major hospital serving this quiet corner of the U.S., the last stop before the international border. 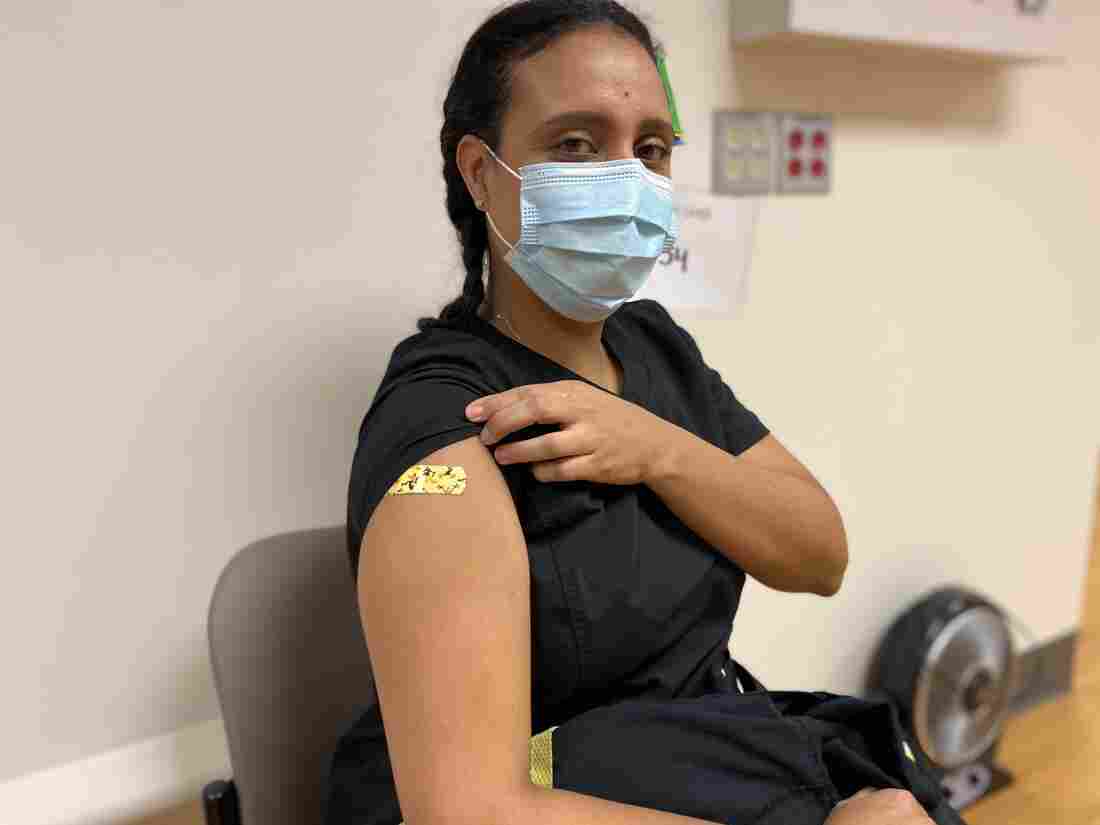 Lina Castillo, who works in PeaceHealth’s urgent care clinic, says she had no hesitation about getting her first or second shot of the Pfizer vaccine. Castillo’s hospital PeaceHealth St Joseph Medical Center in Bellingham, Wash., has just started giving its health care workers their final shot, which makes the vaccine about 95 percent effective against COVID-19.

PeaceHealth runs clinics and hospitals throughout the Pacific Northwest, and has already given the vaccine to about 3,000 workers in Washington.

Dr. Megan Ellingsen did not need anyone to convince her to show up for her second shot of the Pfizer vaccine.

Right before the hospice doctor got her first shot, she did a procedure on a dying cancer patient at his home.

“A week later, we found out he had COVID,” Ellingsen says. “I was in the small bathroom with him for 45 minutes and you can imagine how frightening that was.”

So far, PeaceHealth has not run into any major problems involving the second dose, according to hospital executive Charles Prosper.

“We have had some limitations on the vaccine supply, but we’re seeing that increase with greater capacity,” says Prosper.

Earlier this week, PeaceHealth did encounter a 2-day delay with the arrival of its second shots, but the health care system had already saved up enough doses as a “buffer” just in case.

“To date, that has actually kept us in good shape with no risk of individuals missing their second dose,” says Prosper.

Supply chain “angst” for some hospitals

But supplies are less certain in some parts of the country. 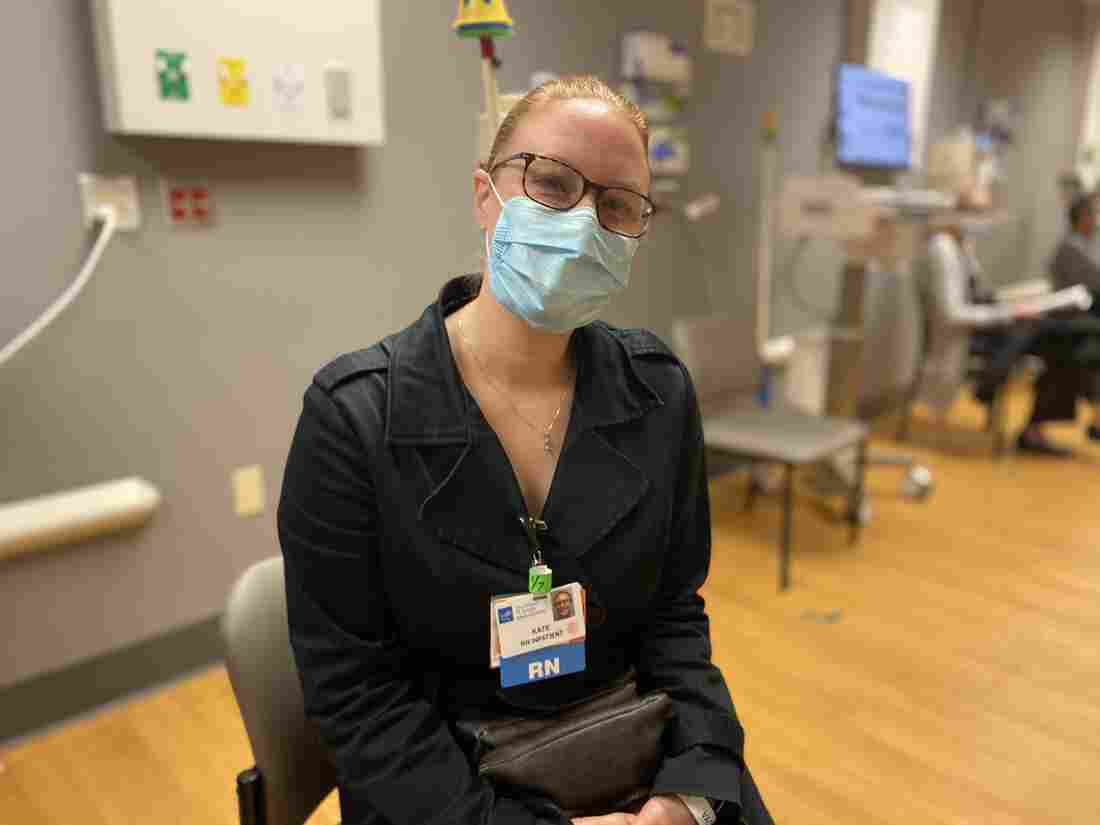 Before the vaccine arrived at her hospital in northwest Washington, ICU nurse Kate Marn wondered if the delays would affect her chance of getting the shot quickly. This week, Marn received her final shot, calling it a “huge relief.”

Florida has directed hospitals not to save up any doses, which puts more pressure on manufacturers to deliver the second doses according to schedule.

“Everybody wants to have the staff scheduled to administer the shots, the appointments ready, and it is just simply challenging to manage all of that without having the certainty of when that will arrive.”

So far, the Pfizer second doses have arrived automatically according to the schedule and Mayhew says she is confident the Moderna shipment will also come as planned, although Florida hospitals have not yet received them.

With so many people already eligible to receive the shot in Florida, more than 4 million seniors, Mayhew says the state is quickly running through their supplies.

“We have a lot of hospitals that are either out of the vaccine or will be running out of vaccine in a handful of days,” she says. “The bottom line is demand is absolutely far exceeding supply.”

Because the U.S. vaccine rollout is going slower than promised, some scientists and health care leaders have argued the second shot should be skipped for now.

The U.K. and other countries are pursuing a one shot approach given the skyrocketing case counts and the emergence of a highly contagious variant of the coronavirus.

But the Food and Drug Administration has rejected the suggestion that the dosing schedule be modified, calling it “premature and not rooted solidly in the available evidence.”

The agency authorized both the Pfizer and Moderna vaccines based on a two dose course.

The University of Florida’s Glenn Morris says there could be a compelling reason to delay the second dose, if the vaccine rollout is faltering in certain communities.

“We have gone with the strategy of every state for itself and within many states, every county for itself, and so within those circumstances, there may be instances where delaying a dose may make sense,” Morris says.

There is already a longstanding dilemma with vaccines that require multiple doses. Research shows that introducing one extra step leads to fewer people following through, says Dr. A Mark Fendrick, who directs the University of Michigan’s Center for Value-Based Insurance Design.

“Since last summer, I’ve been concerned about this two shot problem,” he says. Fendrick says the good news it that one of the biggest barriers, money, has largely been removed since the vaccine is being given for free, but there are still many other hurdles, whether that’s taking time off work, concerns about extra side effects or a sense of “complacency that one is enough.”

He recommends giving people personalized reminders about getting the shot and small financial rewards for completing the final dose. “We can’t let the last leg of this remarkable COVID vaccine journey, this so-called two dose problem, stop us from the quest to get our lives back,” he says.

What you eat plays a leading role in your health and well-being. When someone eats healthy…

What you eat plays a leading role in your health and well-being. When someone …