Los Angeles County and the rest of the nation are in a race against time to vaccinate as many people as possible against the coronavirus before a variant thought to be even more contagious takes hold.

Those concerns were underscored in a U.S. Centers for Disease Control and Prevention report released Friday, which stated that new modeling indicates the variant “has the potential to increase the U.S. pandemic trajectory in the coming months,” with the projection showing “rapid growth in early 2021, becoming the predominant variant in March.”

The new strain, first identified in Britain, weighs heavily in the minds of L.A. County public health officials as they weigh potential new health orders aimed at stymying the spread of the disease.

Settings that could be scrutinized further include outdoor gyms, which have been allowed to open at 50% capacity, and indoor malls and retail, which are supposed to be open at only 20% capacity, L.A. Mayor Eric Garcetti said Thursday night.

Public Health Director Barbara Ferrer said this week that she, too, is worried about the variant — which, though it has yet to be officially found in L.A. County, has already been identified in San Diego and San Bernardino counties.

British scientists have bolstered their case that the new coronavirus variant spreads more easily than its predecessors. It could be worse in the U.S., they warn.

Ferrer said the CDC is urging public health officials nationwide to do whatever it takes to prevent transmission “so that that variant doesn’t get hold as being the most dominant form of the virus that circulates for as long as possible.”

“What we’re really trying to do here is really sort of create the opportunity for us to actually get as many people vaccinated as possible before that variant gets hold,” Ferrer said. “That means we have to go back to the drawing board and look at everything we’re doing, and really assess how, in a very short period of time, can we get more control over the surge, more ability to actually slow rates of transmission?”

Scientists believe the variant, known as B.1.1.7, isn’t more likely to be fatal or make people sicker once they are infected. There’s also no evidence that the newly developed coronavirus vaccines won’t be effective against it.

Current expert projections show that, if left unchecked, the U.K. variant could dominate locally by March, according to Ferrer.

“This is our time to try to get the surge under control — before the variant is widespread,” she said.

Hospitals teeter on edge of ‘last-resort’ guidelines for care 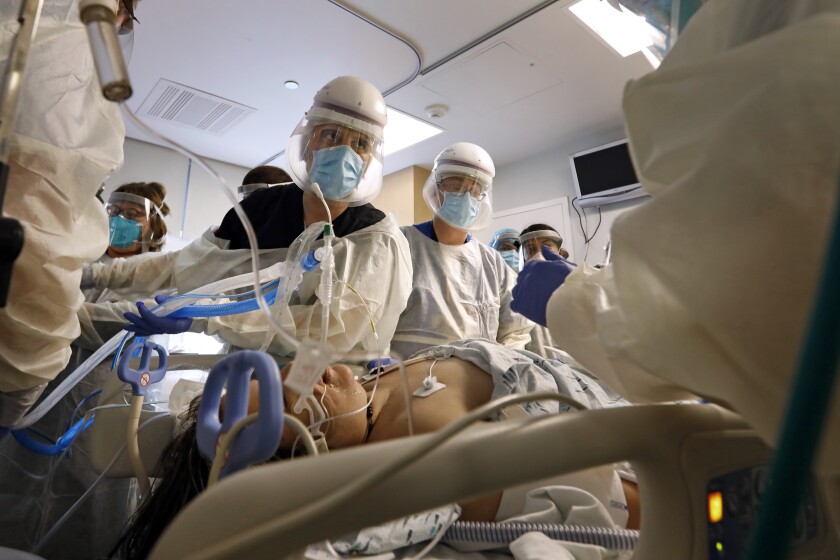 Hospitals teeter on edge of ‘last-resort’ guidelines for care

‘Crisis care’ means a hospital has reached a point where resources and staffing are so overwhelmed it can’t care for all patients the way it normally would.

“The increased transmissibility of the B.1.1.7 variant warrants rigorous implementation of public health strategies to reduce transmission and lessen the potential impact … buying critical time to increase vaccination coverage,” the report stated. “CDC’s modeling data show that universal use of and increased compliance with mitigation measures and vaccination are crucial to reduce the number of new cases and deaths substantially in the coming months.”

Though “there is no known difference in clinical outcomes” when it comes to the variant, the CDC report noted a sobering reality: “A higher rate of transmission will lead to more cases, increasing the number of persons overall who need clinical care, exacerbating the burden on an already strained health care system and resulting in more deaths.”

According to the CDC, the variant is estimated to have first emerged in Britain in September.

“Absolutely, it’s a concern of ours,” Dr. Mark Ghaly, the California health and human services secretary, said at a briefing Tuesday.

For one thing, the variant’s presence illustrates why out-of-home activities carry a higher risk now than they did months, even weeks ago.

“We’re worried that if it takes off, if it does become more widespread, that we’re going to see even [more] increased transmission versus where we are now,” Ghaly said. “The rates of transmission are going to be significantly more challenging to contain if we see more widespread proliferation of this U.K., or this B.1.1.7 variant.”

The faster vaccines can get in Californians’ arms, Ghaly added, the less of an impact the variant will have in California, “but in the short run, [we are] very much concerned about it.”

Ghaly has previously characterized the new variant as “a little bit more sticky than the COVID virus that we’ve been seeing to date.”

In other words, the variant seems to have a much easier time sticking onto a human cell so that it can hijack it, begin to replicate and spread though the body. Dodger Stadium and other mass vaccination sites will be key in California’s effort to accelerate its COVID-19 vaccination rate.

How to sign up to find out when it’s your turn to get the vaccine in L.A. County
Daily COVID-19 death count soars to new heights in California

The B.1.1.7 variant accounted for 20% of new infections in southeastern England in November.

The cases identified in San Bernardino and San Diego counties so far come from at least 20 different households that don’t seem to be particularly related, with no clear link to overseas travel, said Dr. George Rutherford, an epidemiologist and infectious diseases expert at UC San Francisco.

“That would all suggest that there is much wider spread transmission of this variant than we’re detecting right now,” Rutherford said at a campus town hall meeting last week.

Increasing study has confirmed some scientists’ early suspicions: The variant is a super-spreader, capable of expanding the pandemic and supplanting less transmissible strains of the virus.

Once it becomes established in the U.S. — a prospect experts view as inevitable — thwarting it will require public health measures more stringent than those adopted so far, a speedier vaccine rollout, and a greatly increased willingness among residents to be immunized.

“We’re losing the race with coronavirus — it’s infecting people much faster than we can get vaccine into people’s arms, and it’s overcoming our social distancing,” said University of Florida biologist Derek Cummings, an expert in emerging pathogens. “Now there’s this variant that will make that race even harder.”

No decision has yet been made about further restrictions under the L.A. County stay-at-home order.

“I will support what [the Department of] Public Health recommends and our public health professionals recommend,” Garcetti said Thursday night.

He said it’s possible that additional closures may not be necessary if it seems the pandemic is stabilizing, “but the moment it goes up, like we saw in December — at any pace like that — absolutely, that is something we cannot sustain and most importantly, our hospitals cannot.”

Cumulatively, the county has reported 13,244 deaths and 976,075 coronavirus cases since the start of the pandemic.

More than 2,000 of the county’s COVID-19 deaths have been reported in just the last nine days.

Wrexham owner Rob McElhenney shares his body transformation tips so you can get ripped just like him in… – talkSPORT.com

One thing is undisputed about the grapefruit diet: It certainly has staying power. Advertising …