About 900 bodies are currently being held at the Los Angeles Medical Examiner Coroner’s Office, which usually has a capacity of 500, according to spokeswoman Sarah Ardalani. She estimates that about 150 of the bodies are overflow from local hospitals that have run out of room.
Since the initial Covid-19 surge last spring, a dozen refrigerated storage units have been on site at the downtown location. A dozen more trailers will be in place by next week, along with six refrigerated containers, Ardalani told CNN.
National Guard members have been assisting the coroner’s office with transporting and storing bodies, but it is not enough. Ardalani said the office is working with the state to bring in more help. 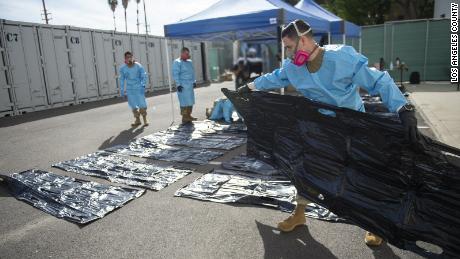 The number of available ICU beds has also dropped to the lowest level recorded yet, according to data from the California Department of Public Health. This despite indications that hospitalizations are beginning to level off in the state.
There are currently 1,094 ICU beds available for California’s 40 million residents. More than 22,000 people are hospitalized with the virus, and nearly 5,000 of them are in intensive care units.
However, the positivity rate in California is maintaining a downward trend seen for the past several days and currently stands at 13.4%, compared with 14% last Friday, which marked the highest level seen since widespread testing began.
About 90% of the state’s residents are still under stay-at-home orders as projections show ICU capacity and other factors will remain at critical levels for at least the next four weeks.
But there is hope.
L.A.’s Dodger Stadium, which has been a testing site will now become a mass vaccination center. Vaccine administration at the stadium is expected to start Friday, with the capacity to vaccinate about 12,000 people a day when everything is fully up and running, according to Los Angeles Mayor Eric Garcetti’s website.
“Vaccines are the surest route to defeating this virus and charting a course to recovery, so the city, county, and our entire team are putting our best resources on the field to get Angelenos vaccinated as quickly, safely, and efficiently as possible,”Garcetti said.