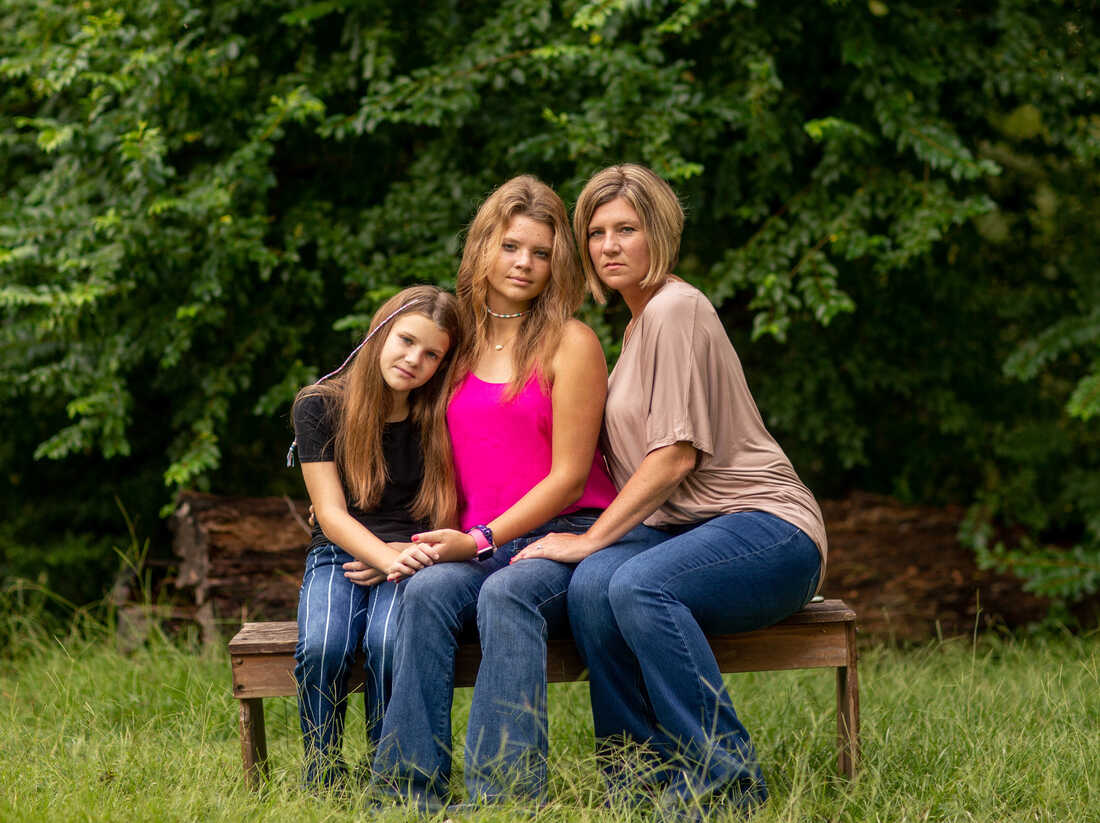 Allie Henderson with her sister Claire (left) and her mom, LeAnn, outside their home recently in Terry, Miss. “I want people to get vaccinated — because I know what it feels like,” Allie says of her near-fatal encounter with COVID-19 earlier this year.

The Allie Henderson who stepped out of her mother’s car to a driveway full of cheering friends and family holding “Welcome Home” signs last February was a wisp of her former self.

After 10 days in the hospital with a near-fatal case of a multi-system inflammatory syndrome related to COVID-19, the then-13-year-old softball phenom and beloved, straight-A student from Hinds County, Miss., was lethargic and frail. She braced herself against the car’s door frame.

But six months later, despite having watched a loved one struggle with the illness, some of Allie’s closest friends and family remain unvaccinated.

Meanwhile, with the highly contagious delta variant swarming across Mississippi, the state has one of the highest per capita infection rates in the nation and one of the lowest vaccination rates. In Hinds County, where the Hendersons live, the vaccination rate against the coronavirus as of early September is 45% — well below the national average of 53%.

Stories like Allie’s and her family’s are playing out across the United States, as neighbors and friends who love and cherish each other are staring COVID-19 in the face, and still not seeing it the same way. Listening to the people in Allie’s world offers a few clues into the whys of those dissonant views. 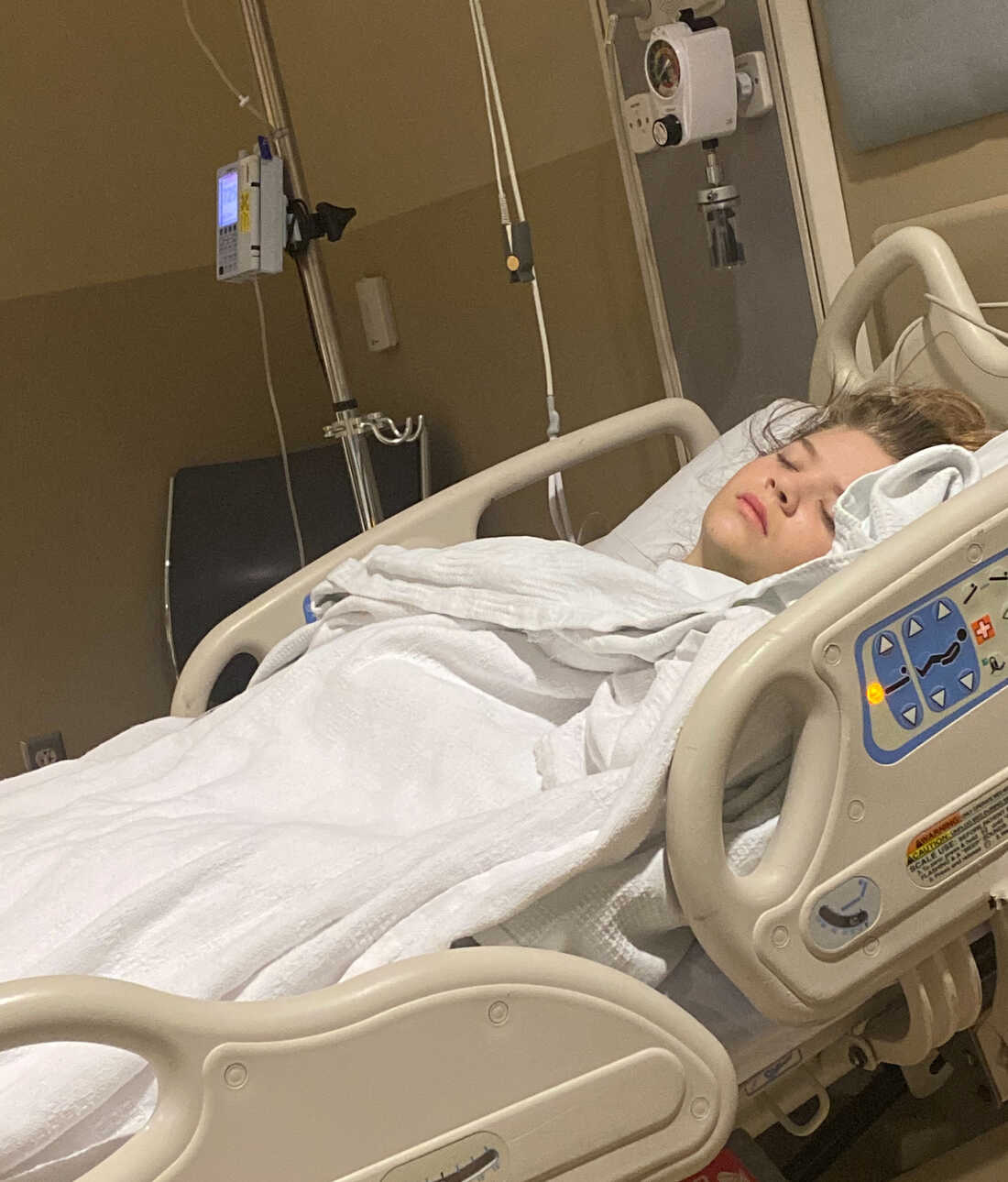 In late January, 13-year-old Allie Henderson was hospitalized with multisystem inflammatory syndrome in children. MIS-C appears to affect children two to eight weeks after an asymptomatic or mild COVID-19 infection.

“I feel like it hasn’t been tested enough,” says Erin Acey, 16, of the vaccine. Erin is a cousin of Allie’s who lives a block away and grew up playing wiffle ball with Allie in the backyard.

Erin’s parents are also not vaccinated, nor is another cousin, Cara McClure, a hairstylist in nearby Clinton. McClure is 23 and suspicious of conflicting information she’s heard about the vaccine.

“I try not to watch the news. I get it from Facebook,” says McClure. “I really try not to talk about it at work because it’s like politics: You don’t talk about politics at work.”

‘Please pray. Allie is in the hospital.’

The gravity of Allie’s condition last winter became clear when the prayer requests went out, months before vaccines to prevent COVID-19 were widely available.

Congregations across the area — in Crystal Springs, Hazelhurst, Wesson and Georgetown — prayed for Allie. Teachers at Copiah Academy, the teen’s small, independent Christian school in Gallman, Miss., prayed before class.

Allie’s grandmother texted the Rev. Wayne Hall, pastor at Jackson First, an Assembly of God church where the Hendersons have been regular parishioners. Allie was a fixture in the children’s ministry, a vivacious child always in the middle of the action, and the Hendersons are an admired family of go-getters. “Please pray,” the text said. “Allie is in the hospital.”

“When the request went out, it was all hands on deck,” says Hall, who hunts with Allie’s dad, Brook. He recalled the private prayer he said aloud, “We believe in God to heal her body and are praying for Mom and Dad, who are walking through this, because there are a lot of unknowns.”

Allie had felt crummy at school on a Monday in late January, but still managed to play in a basketball game that evening. A few days later, she was doubled over with stomach pain, and no remedy — not Tylenol, Motrin or baths — would break her 104-degree fever. LeAnn Henderson, Allie’s mother, asked her best friend, Caroline Young, a nurse and fellow softball mom, “Why can’t we get this fever to go away?”

At the emergency room, Allie tested negative for the coronavirus, strep and influenza, and doctors settled on removing her inflamed appendix. But soon after the surgery, her fever spiked again. Her blood pressure and oxygen levels dropped. Her eyes were eerily bloodshot and her hands splotchy.

“Allie was so weak, she was talking about giving up,” LeAnn remembers.

An ambulance whisked Allie to Children’s of Mississippi, a hospital in Jackson with a pediatric intensive care unit, where doctors diagnosed her with multisystem inflammatory syndrome in children. MIS-C, as it is known, appears to affect children two to eight weeks after an asymptomatic or mild COVID-19 infection. A blood test found antibodies to the coronavirus, and Allie began receiving steroids, blood pressure medication and intravenous antibiotics to fight the syndrome.

McClure, who often styled Allie’s hair and took her to the local waterpark, video-chatted with her cousin. “She looked tired, drained — her face was white,” says McClure. Already thin, Allie was losing weight. At the hair salon, McClure tried to keep the unfolding family crisis away from clients who were already spooked by the pandemic. Her co-workers would see her crying between appointments. 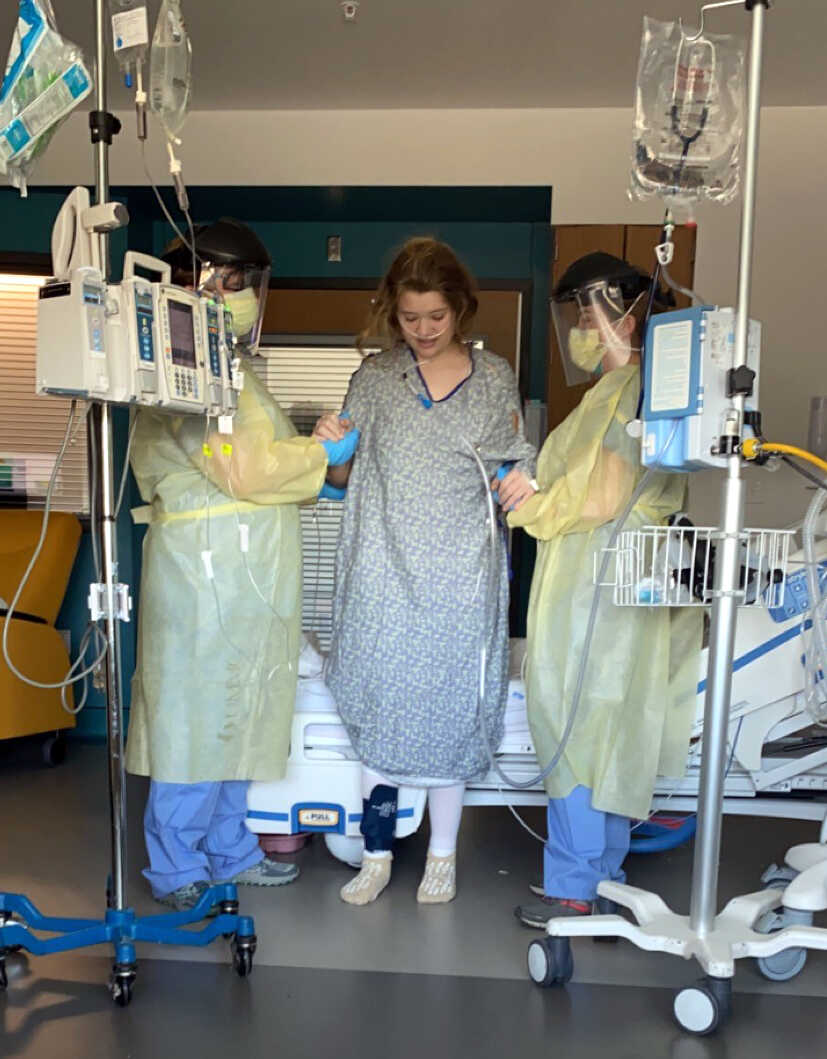 Hospital aides help Allie Henderson walk during her hospitalization in late January. Even after she was able to return to school, recovery was slow. She was overcome by seizures sometimes, and passed out at least twice. One night, Allie awoke and couldn’t feel her legs.

Outside the hospital windows, friends and family stood on the grass and held up signs that Allie could see from her room. There was an endless stream of food deliveries for the family: Chick-fil-A, chili from Wendy’s, seafood pasta from Biaggi’s.

‘Parents began to get scared’

“Everybody in Allie’s world knew about this — softball, school, church — it was on our doorstep,” says LeAnn. “People had known adults who had gotten sick and been in the hospital, but not sick like Allie. I think it was like, ‘Wow, this is real. And this happened to her.’ They know how strong and athletic [she is]. She’s a power hitter.”

At Copiah Academy, Allie’s absence registered with growing fear. “Parents began to get scared,” says Rita Henley, a school administrator. The school had taken some COVID-19 precautions — sanitizing classrooms, requiring students to wear masks and to physically distance themselves from each other. Students who tested positive for the coronavirus and those who shared classrooms or sports teams had to quarantine at home. “Some of the parents embraced it and some didn’t,” says Henley. “It reflected the differences in opinion that we have right now in our country.”

As Allie came in and out of consciousness at the hospital, she fretted about her grades and about missing the remainder of basketball season and the upcoming softball season.

“Allie is a very aggressive athlete, always ready to practice and play hard,” says Caroline Young, LeAnn’s friend whose daughter plays on the same travel softball team as Allie. “That was the most poignant thing about the illness — we saw a really strong teammate become weak.”

LeAnn shared her family’s ordeal with a local television station. “I immediately went to the media and said, ‘This is something else COVID can do. This happened to my 13-year-old. We need to look out for this.'”

Allie returned to school for a few hours each day and grew stronger. On occasion, she was overcome by seizures, passing out once in the bathroom at home and once on her way to her bedroom. One night, Allie awoke and couldn’t feel her legs.

“I was screaming,” LeAnn says, whose usual unflappable disposition had finally caved. By spring break, in mid-March, after neurology appointments and brain scans and heart scans, Allie started coming back to herself. She and her family got the vaccines when they became available.

At school, the questions overwhelmed her. To deflect the constant queries about her absence, she joked, “I said I had a bad haircut and couldn’t come to school.” But she didn’t feel the urge to proselytize about the dangers of COVID-19. “I don’t like to go public about personal stuff.”

She suited up for a softball scrimmage and could barely hoist the bat above her shoulder. “It was very difficult because I couldn’t do what I could do before,” Allie says. She told her mom, “I just suck at this.”

The crowd of softball dads teared up when Allie would try to swing the bat. “It’s amazing that she’s out there,” LeAnn said the men told her later.

Seeing is believing — sort of

Students returned to Copiah Academy in early August. Masks are not required, nor is the COVID-19 vaccine required for those who are eligible. “Our internal conversation is that we do not feel we can require the vaccine unless the state requires it,” says Henley. But “because of Allie, people — without question — know that this is a real thing.”

Still, the shifting nature of the pandemic — the arrival of the delta variant, the news that vaccinated people can spread the coronavirus infection — has brewed confusion. “I truly think that we see too much back-and-forth on the news. I think it hurts people,” says Henley, who is fully vaccinated against the virus. “People don’t know what to believe.”

Federal health officials say millions of Americans have been safely vaccinated, and vaccination reduces the risk of severe complications from COVID-19.

Wayne Hall, the pastor of the Hendersons’ church, is reluctant to direct his parishioners to get vaccinated, though he says, “Allie’s story has helped a lot of people really understand, ‘Hey, this is not a pick-and-choose kind of deal. It can hit home anywhere.’ “

His congregation, he says, believes in healing. “We believe in the power of God, and we also know God gives wisdom,” he says. “If the CDC is saying things we need to abide by, we need to really listen.”

At the hair salon in Clinton, McClure shares more openly now about her cousin’s illness with her clients. “I’ll say, ‘my little cousin had it,’ and we get to talking about it,” says McClure. But even now, she doesn’t push it. “When clients come in, we want it to be about them. We ask, ‘Are you going on vacation?’ We focus on them to make them feel good.”

McClure does notice that others in her sphere have dropped their guard when it comes to defending themselves against catching the virus or spreading it. “They take everything for granted,” she says.” ‘Oh, we’re good. We’re fine. We don’t have to sanitize.’ ” Even now at the salon we try to make people sanitize, and they’re like, ‘Ugh.’ “

McClure had a mild COVID-19 infection last Thanksgiving — headache and nausea — but it passed. Even now, she’s in no rush to get vaccinated. “Even with the vaccine, you can still get it,” she says. “Every day I feel like something about it is changing — there’s a new strand,” she says.

Erin, Allie’s 16-year-old cousin, still isn’t sure when — or if — she’ll get vaccinated. She’s nervous about the side effects and wants to “wait and see.” In her view, the pandemic has “died down” and she’s unfamiliar with the delta variant. Rather than believe what she sees on the news or hears from federal health officials, she says she would “rather read about it and see it myself.”

It’s very confusing, for my part,” Allie says. “I want people to get vaccinated — because I know what it feels like.”

Some of her closest friends have gotten the vaccine. Was it because of what happened to her? She doesn’t hesitate: “Yes, ma’am.”

Kaiser Health News is an editorially independent, national newsroom and program of the Kaiser Family Foundation. KHN is not affiliated with Kaiser Permanente.